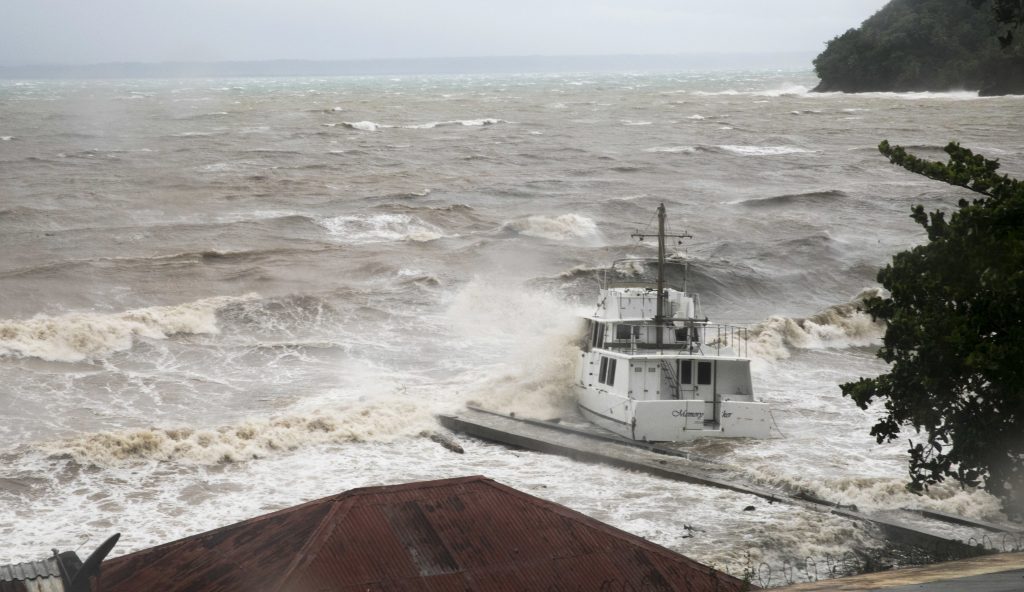 Hurricane Irma plowed past the Dominican Republic toward Haiti on Thursday after devastating a string of Caribbean islands and killing at least 10 people as one of the most powerful Atlantic storms in a century took aim at Florida.

With winds of around 175 mph, the storm lashed several small islands in the northeast Caribbean, including Barbuda, St. Martin and the British Virgin Islands, tearing down trees, flattening homes and causing widespread damage.

The island of Barbuda, one of the first hit by the storm, was reduced to “literally rubble,” said Gaston Browne, prime minister of Antigua and Barbuda, adding that one person was killed and that the tiny two-island nation will seek international assistance.

Browne told the BBC that about half of Barbuda’s population of some 1,800 were homeless while nine out of 10 buildings had suffered some damage and many were destroyed.

“It was easily one of the most emotionally painful experiences that I have had,” Browne said in an interview on BBC Radio Four, adding that it would take months or years to restore some level of normalcy to the island.

A surfer was also reported killed in Barbados.

The eye of the hurricane did not directly hit Puerto Rico, passing north early Thursday, battering the U.S. territory with high winds and heavy rains. Three people were killed, and around two-thirds of the population lost their electricity, Governor Ricardo Rossello said.

The eye of Irma was moving west-northwest off the northern coast of the Dominican Republic, heading slightly north of Haiti, the National Hurricane Center (NHC) said.

The United Nations Children’s Fund warned that millions of children could be at risk in the two countries, which share the island of Hispaniola. Impoverished Haiti has been particularly vulnerable to hurricanes and heavy rains.

Irma’s eye was forecast to pass over the Turks and Caicos Islands, a British territory, and the Bahamas before moving towards Cuba’s keys.

Hurricane Irma made history for its strength. There have been very few cyclones stronger than Hurricane Irma, and there have been some that lasted longer. But no other storm in recorded history has maintained top winds of 185 mph for 37 hours.

Colorado State University hurricane expert Phil Klotzbach says that breaks the previous record, held by Typhoon Haiyan, which had similar top winds for 24 hours before it hit the Philippines and killed 6,000 people in 2013.

Irma also has been the most intense Atlantic hurricane on record outside the Caribbean and Gulf of Mexico, measured by its barometric pressure of 914 millibars.

Irma will likely hit Florida as a very powerful Category 4 storm on Sunday, with storm surges and flooding beginning within the next 48 hours, according to the NHC. Gas shortages in the Miami-Fort Lauderdale area worsened on Thursday, with sales up to five times the norm.

Cuba started evacuating some of the 51,000 tourists visiting the island, particularly 36,000 people at resorts on the picturesque northern coast, most of them Canadians.

Authorities in the Dominican Republic ordered evacuations in towns along the northern Atlantic coast such as Cabarete, a thriving tourist spot where trees were brought down by high winds but no severe damage was reported.

“There is a lot of wind and rain,” Puerto Plata Assistant District Attorney Juan Carlos Castro Hernandez told Reuters by telephone. “We expect things to get worse.”

Cabarete was expected to bear the brunt of the hurricane’s winds and storm surge. Hotel executive Roque Alvarez said most tourists left prior to the storm, either flown or bused out.

“It is an enormous disaster. Ninety-five percent of the island is destroyed. I am in shock,” Daniel Gibbs, chairman of a local council on St. Martin, told Radio Caribbean International.

Amid criticism from many residents that the British government could have done more to help its territories, Foreign Office Minister Alan Duncan said a Royal Navy ship would reach the affected islands on Thursday with tents, vehicles and other relief equipment.

“Anguilla received the hurricane’s full blast. The initial assessment is that the damage has been severe and in places critical,” he told parliament.

One person was killed on the island, and roads were blocked, with damage to the hospital and airport, power and phone service, Anguilla emergency service officials said.

Britain’s Queen Elizabeth said she was “shocked and saddened” by the reports of Caribbean devastation.

In Puerto Rico, Rossello said it was too early to estimate the cost of the damage. The streets of the capital San Juan were littered with downed tree limbs and signs, with many street lights out.

Juan Pablo Aleman, a restaurant owner, said he had ridden out the storm in his 11th-floor apartment.

“The building moved, shook a few times. A lot of shingles came off, and some windows broke,” he told Reuters. “If it had gone a little more to the south, it would have been catastrophic.”

“We’re asking all those living in areas at risk to leave their homes. If you don’t, you’ll be evacuated by force,” President Jovenel Moise said. “When you go to shelters, you’ll find food; you’ll have something to sleep on.”

Irma was the strongest hurricane ever recorded in the Atlantic Ocean and one of the five most forceful storms to hit the Atlantic basin in 82 years, according to the NHC.

Florida Governor Rick Scott said it was unclear whether Irma would hit the state’s east or west coast but told residents to beware of the sea surge caused by powerful winds.

“The storm surge can kill you,” Scott said on the “CBS This Morning” program on Thursday. He urged people to heed local officials and be ready when the call came to leave their area, promising the government would provide transportation to those who need it.

With Irma set to become the second hurricane to hit the United States in as many weeks, Florida emergency management officials began evacuations, ordering tourists to leave the Florida Keys.

Roman Gastesi, the administrator of Monroe County, which encompasses the Florida Keys, told CNN that streets were empty in Key West and 90 percent of businesses were closed. County officials, including police and emergency workers, would be leaving, he said.

“If you’re going to stay, you’re on your own,” Gastesi said.

Georgia Nathan Deal ordered a mandatory evacuation starting on Saturday from the state’s Atlantic coast, including the city of Savannah.

The evacuation was ordered for all areas east of Interstate 95, all of Chatham County and some areas west of the interstate. He also expanded a state of emergency to 30 counties.

Deal’s order authorizes about 5,000 Georgia National Guard members to be on active duty to help people respond and recover.

Georgia hasn’t been hit by a hurricane with winds Category 3 or higher since 1898.

South Carolina Gov. Henry McMaster also declared a state of emergency. A major strike there would be the first in nearly 28 years.

Two other hurricanes formed on Wednesday.

Katia in the Gulf of Mexico posed no threat to the United States, according to U.S. forecasters. Hurricane Jose was about 815 miles east of the Caribbean’s Lesser Antilles islands, and could eventually threaten the U.S. mainland.

The storm activity comes after Harvey claimed about 60 lives and caused property damage estimated to be as much as $180 billion in Texas and Louisiana.