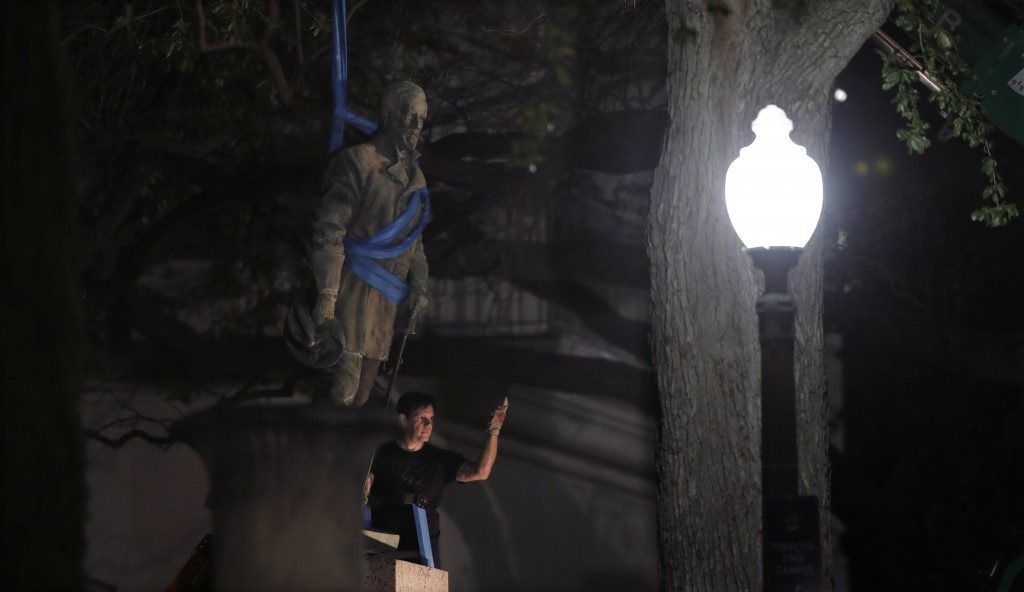 It’s safe to say that many of us are less than exercised over the public debate about Confederate-era statues on public lands. It may animate those with a dog in the race, so to speak, like African-Americans, some wistful white Southerners and pigeons. But the conventional community wisdom is that it is hardly an issue that need concern us.

Before explaining why I disagree, some facts (always a good idea):

While those who oppose the removal of public-space statues honoring Confederate leaders assert that only a tiny minority of radical, “progressive” elements wish to take down the stone tributes, a recent Reuters/Ipsos poll showed that more than a quarter of all Americans favored removing the statues. Another 19 percent said they were conflicted.

The statues, moreover, their advocates maintain, are merely meant to honor brave Civil War heroes who fought for their vision of the United States.

The vast majority of the controversial statues, however, were erected well after the end of that war, and in fact peaked in the early and mid-1900s. Just when, as it happens, many states were enacting Jim Crow laws to disenfranchise black Americans.

Historians don’t consider that confluence of events to be meaningless. As James Grossman, the executive director of the American Historical Association, observed: “These statues were meant to create legitimate garb for white supremacy. Why [else] would you put a statue of Robert E. Lee or Stonewall Jackson in 1948 in Baltimore?”

Moving from facts to assertions, the statue-protectors claim that history will be threatened by the monuments’ removals, as the statues are reminders of the war that split the nation during the early 1860s.

History, though, is safe, preserved as it has been and will continue to be, by more effective means than stone figures, things like history books and school curricula.

Finally, those who oppose tampering with the monuments point out that there will be no end to such undertakings. George Washington and Thomas Jefferson, after all, were slave owners. Shall we dismantle their memorials too? As President Trump asked rhetorically at his August 15 press conference, “Where does it stop?”

That latter argument seems reasonable at first thought; but at second thought, less so. The statues that many citizens feel don’t belong on public land are of men who championed or symbolize slavery, not those who simply, like countless Americans, took advantage of the institution when it was a regrettable but accepted social norm.

And, contrary to the view of a handful of suddenly popular revisionist historians, while the Civil War was fought for a number of reasons, like states’ rights and economic independence, slavery was, in the words of the Confederate vice-president Alexander H. Stephens, “the immediate cause of the late rupture and the present revolution” of Southern independence. Stephens continued by explaining that the Confederacy rested “upon the great truth that the negro [sic] is not equal to the white man; that slavery, subordination to the superior race, is his natural and moral condition.”

Why, though, should we care about the statues? The answer, in a word, is empathy.

Leave aside the very real implications here of darkei shalom, which is not, as some “scholars” suggest, some “meta-halachic” novelty but the expression of an essential Torah concept. Feeling the pain of another is a central mussar goal. And while it may most directly have impact on the pain of fellow members of Klal Yisrael, our own “family,” the middah stands on its own as an ideal, one to be cultivated and internalized.

That millions of fellow human beings are offended by towering reminders of their dreadful history in our country should at the very least make us consider “what is hateful,” to use Rabi Akiva’s formulation, to us, to wonder how we would feel were there a swastika monument, or a statue of American Nazi Party founder George Lincoln Rockwell, who merely hated and didn’t really harm Jews, on the front lawn of a courthouse or in a public park.

If one’s answer to that question is “eh, no big deal,” then unconcern for the hundreds of public tributes to proponents of the enslavement and mistreatment of a people is at least consistent.

But if one’s answer is that a stone swastika or a Nazi on a pedestal, his hand outstretched in tribute to his vision, is offensive, then we need to recognize, and appreciate, why others are irritated by very real tributes to very real racism.