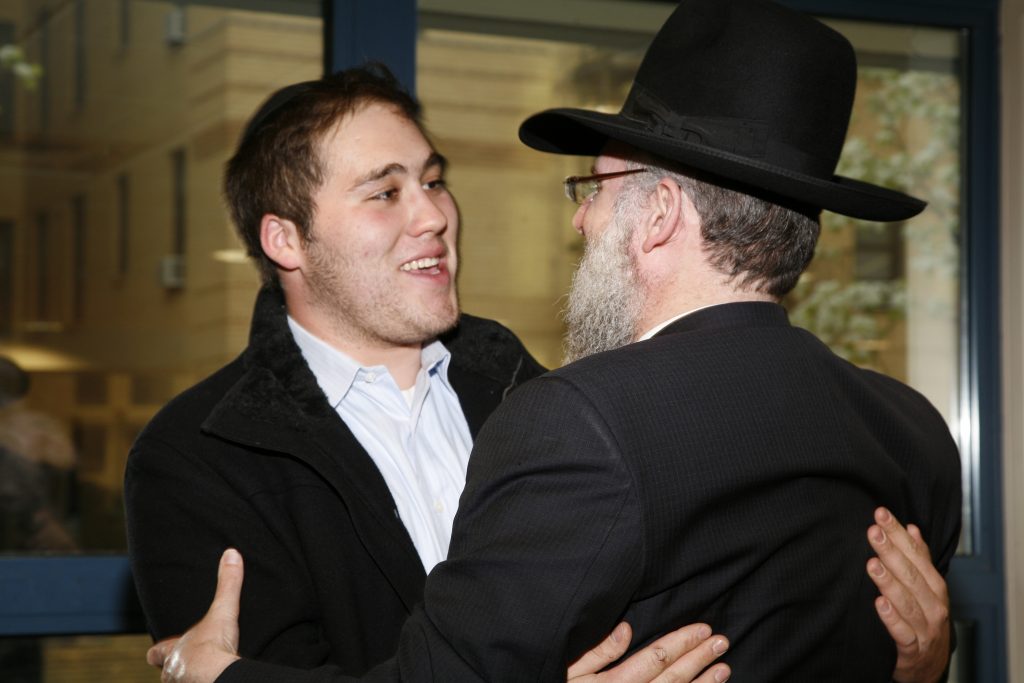 On the 10th of Elul, Chaim Yechiel Michel ben Refael Feivel Shneor was tragically taken from this world. While biking home from Far Rockaway to Brooklyn to prepare for Shabbos, Chaim was hit by a speeding car and thrown 20 feet across Ocean Parkway. Hatzolah members and hospital staff were unable to revive him and he was niftar approximately at shekiah time.

Chaim and his family had just celebrated his 28th birthday the Shabbos before. Hakadosh Baruch Hu decided that his 28th birthday would be his last, and took him back from us for reasons we cannot begin to understand.

If you had the privilege to know Chaim, you were one of the lucky ones. Chaim was a kind, caring and generous individual. He was a loyal friend and a generous baal tzedakah.

Chaim’s journey in life was not an easy one. He was a yasom from a very young age. His father was niftar when he was only two years old. Despite this, Chaim grew into a strong, determined and accomplished adult. He showed tremendous respect to his mother who raised him alone. He was extremely sensitive to the plight of almanos and yesomim.

His kindness was exemplary. He helped care for a handicapped friend for many years with the kind of respect and friendship we can all learn from. He never once made his friend feel like what he did for him was a favor; it was always his privilege. He tried to focus on the small, non-glorious tasks that many do not run to do. He always said that people will come out and help when there is a photo op, or fun activity planned, but when it’s time to get down and dirty, that’s when only the true friends stick around.

He believed that if you want to see who the real doers are, they are never the ones in the fun/cute pictures. They are the ones spending hours on the phone trying to advocate and improve the quality of life for handicapped people. They are the ones who put on the rubber gloves and simply do what needs to be done. They are the ones keeping track of all the doctors, medications, caregivers, and finances. That was Chaim, a true friend, a doer. He did all that and more and did not wait or look for any acknowledgment.

Chaim listened. When someone was facing something beyond his capacity, he acted. He never only gave suggestions for what to do; he implemented them. When a neighbor was suffering from severe knee pain, Chaim suggested a specific doctor. When that neighbor didn’t follow up, Chaim finally made the appointment himself on the neighbor’s behalf. The doctor helped reduce his pain significantly.

Chaim knew how to make people feel special. He loved spending time with his nieces and nephews. He would visit, bring treats, buy them prizes and, most importantly, give each one his undivided attention. The children would ask, “Uncle Chaim, can we please have a schmooze session?” He sat for hours listening to each concern they had, no matter how mundane. He listened, analyzed and thought it through so that no matter what they were going through, that to him that was the most important issue in the world at that moment.

He made each person feel important and valued for his own unique qualities and congratulated each on his own accomplishments; he rejoiced at others’ victories as if they were his own.

He had tremendous empathy for anyone suffering in Klal Yisrael. It was particularly painful to Chaim when individuals in Klal Yisrael did not get along. It truly disturbed him when people held grudges. He could not fathom why it was so common for individuals to say, “I’m waiting for an apology.” He used to say, “Life is too short to miss out on because you’re angry… too angry to see the big picture.”

Chaim insisted on honesty and integrity in his finances. He took great pride in the fact that he conducted himself in all business aspects with the utmost emes and yashrus even if there would be a financial loss. He would advise others only after heavily researching their situation in order to provide what he felt was the best advice for them. He was particularly careful with maaser money. He would even remark that he saw the Hand of Hashem in this respect very clearly. He saw that if he did not give maaser he would lose the money some other way.

Chaim was very makpid on hidur mitzvah. When he would pick something for a mitzvah he spared no expense or time. He always aimed to have an esrog that was perfectly clean and of beautiful form. The socher would set aside special esrogim just for Chaim and took pride in knowing exactly what Chaim liked. He spent time ensuring that the other minim were the most mehudar as well.

When Chaim would build the sukkah himself, it would not be complete until there was a sufficient amount of noi sukkah.

Chanukah was his favorite Yom Tov. He looked forward to it for months. He insisted on making his own neiros and would never buy the ready-made. For Pesach every year he would buy a new Haggadah and would prepare in advance to make sure he could make a significant contribution to the Seder.

Staying up Shavuos night and learning was a highlight of the year for him. And he made sure everyone was comfortable and well taken care of so that they could stay up as well. Shabbos and Yom Tov could never be without its proper kavod and oneg. He insisted on having only china dishes at the table and would spend the time necessary to wash them by hand. He often started helping to prepare for Shabbos as early as Wednesday.

Chaim loved having guests and had a knack for getting to know each one, their likes and dislikes, and tried to provide accordingly. On the first day of shivah, several people remarked how, over the years, Chaim made them feel special and wanted. They loved conversing with him for hours and always felt he had a special insight and understanding of their specific interests.

Chaim was a proud alumnus of Yeshiva Darchei Torah in Far Rockaway, where he was privileged to spend his mesivta years and where he developed a close kesher with his Rebbeim, a bond that he maintained long after he graduated. Whether it was Harav Yaakov Bender, the Rosh Hayeshivah, or Rabbis Leibish Langer, Menachem Gold, Shia Neuberg and Aaron Goldman, Chaim cherished his connection with these talmidei chachamim and kept in close touch with them. Chaim was very close to his Mashgiach, Harav Dovi Keilson. They had a private seder in which they learned hashkafah sefarim.

It was also at Darchei Torah that he first befriended a wonderful classmate with a physical disability. He gravitated towards this classmate, schmoozing with him, assisting him with his needs and brightening his days. They remained best friends until Chaim’s petirah — more than 10 years after graduation.

Chaim loved life and lived it accordingly. His personality was dynamic and could light up any room. He was a gentle soul in a tough exterior built to fiercely protect his friends and family. He had so much to offer and will be sorely missed by the many people whose lives he touched. He leaves this world with a tremendous void to fill. If there is anything I have learned from Chaim, it is that actions speak louder than words. Please take this opportunity to do something l’iluy nishmaso. We seek to write a sefer Torah in his memory.