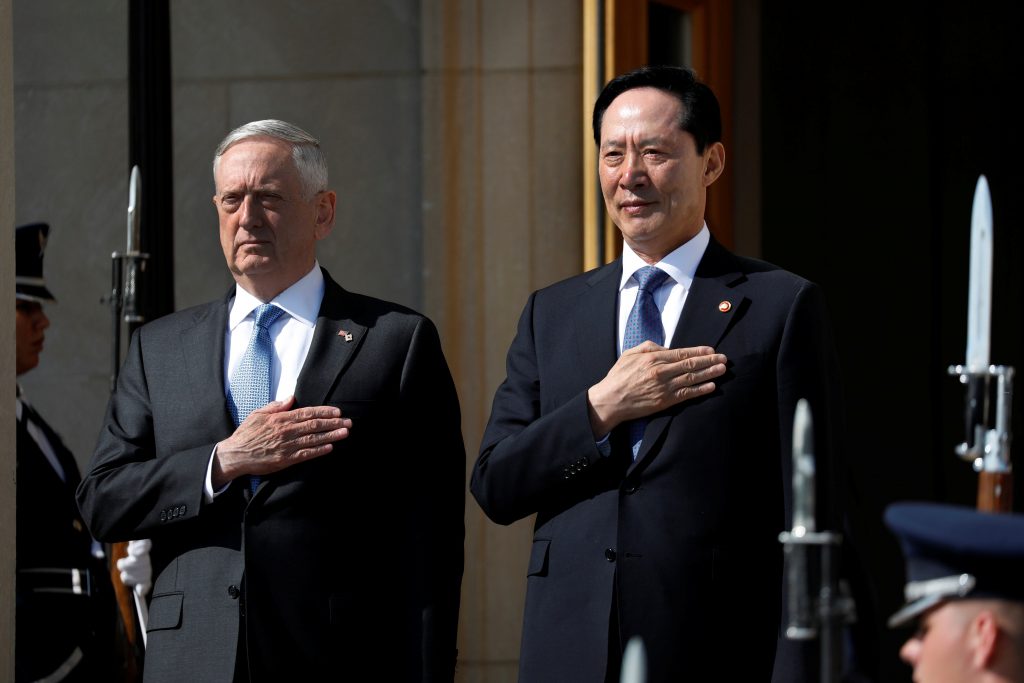 South Korea‘s defense minister on Monday said it was worth reviewing the redeployment of American tactical nuclear weapons to the Korean Peninsula to guard against the North, a step that analysts warn would, if taken, sharply increase the risk of an accidental conflict.

North Korea’s increasingly hostile threats, matched by the rapidly advancing ability to make good on them, have policymakers in the United States and in South Korea wondering how to respond.

President Donald Trump and his South Korean counterpart, Moon Jae-in, spoke on the phone for 40 minutes Monday night, Korean time — some 34 hours after the nuclear test and more than 24 hours after Trump took to Twitter to criticize Moon’s “talk of appeasement.”

The two agreed to remove the limit on allowed payloads for South Korean missiles — something Seoul had been pushing for — as a way to increase deterrence against North Korea, according to a read-out of the phone call from South Korea’s Blue House.

They also agreed to work together to punish North Korea for Sunday’s nuclear test, including by pushing for tougher sanctions through the United Nations.

Only the “strongest” economic sanctions would be acceptable, U.S. Ambassador Nikki Haley told the United Nations Security Council Monday, but she did not spell out U.S. proposals or how she would overcome the objections of veto-wielding permanent members China and Russia.

Haley did, however, rule out the “freeze for freeze” proposal backed by China and Russia, which would suspend U.S. joint military exercises with South Korea in return for suspension of North Korean nuclear and missile tests.

“I told him that it would be good for strategic assets to be sent regularly to the Korean Peninsula and that some South Korean lawmakers and media are strongly pushing for tactical nuclear weapons (to be redeployed),” Song told a parliamentary hearing on North Korea’s nuclear test, without disclosing Mattis’ response.

A poll that YTN, a cable news channel, commissioned in August found that 68 percent of respondents said they supported bringing tactical nuclear weapons back to South Korea.

On Monday, the day after North Korea conducted a nuclear test easily powerful enough to devastate a large city, Song appeared to throw his support behind the idea.

“The redeployment of tactical nuclear weapons is an alternative worth a full review,” Song said, echoing a position closely associated with conservatives in South Korea, not progressives like Moon Jae-in, who was elected president in May after vowing to engage with North Korea.

The United States had about 100 weapons, including short-range artillery with nuclear warheads and gravity bombs, stationed in South Korea until 1991. President George H.W. Bush signed the Presidential Nuclear Initiative and withdrew all naval and land-based tactical nuclear weapons that had been deployed abroad.

Shortly after, the two Koreas signed an agreement committing to making the peninsula nuclear weapons-free — a deal that North Korea violated by developing nuclear weapons. But Pyongyang has maintained that Seoul has also broken its promise because remaining under the U.S. nuclear umbrella is tantamount, it says, to having nuclear weapons.

After the defense minister spoke at the hearing, the South Korean president’s office said that it was not considering redeploying tactical nuclear weapons. “Our government’s firm stance on the nuclear-free peninsula remains unchanged,” said Kim Dong-jo, a spokesman for Moon.

Military experts in the United States are almost universally opposed to the idea of deploying strategic or tactical weapons in South Korea.

“The thing that most concerns me about redeployment is that it introduces more room for miscalculation or unintended escalation,” said Catherine Dill of the Center for Nonproliferation Studies in Monterey, California.

In that situation, the ability to react more quickly could be a negative factor.

From the perspective of the military alliance between the United States and South Korea, having long-range ballistic missiles or strategic bombers are “perfectly sufficient” to continue to deter North Korea, Dill said.

As alliance partners, the United States and South Korean militaries work in close cooperation in South Korea, regularly conducting drills together. This includes sending “strategic assets” like bombers stationed on the Pacific Island of Guam and aircraft carriers to South Korea on a regular basis.

As the North Korean threat has increased this year, the United States has sent F-35 stealth aircraft and other strike fighters on flyovers across the southern half of the peninsula in a not-so-thinly veiled warning to Kim. U.S. Pacific Command even released photos last week of B-1B Lancers dropping bombs on a range on the southern side of the demilitarized zone that separates the two Koreas.

But a growing number of policymakers in Seoul say that Guam is too far away and that, if it comes under attack from North Korea, South Korea can’t wait the two-plus hours it would take American bombers to arrive from their base in the Pacific.

“We need these strategic or tactical assets that can destroy North Korea’s nuclear-capable missiles before they can inflict harm on us,” said Chun Yung-woo, a nuclear expert and former South Korean national security adviser.

“Right now they can retaliate but by that time, tens of thousands of people might have been killed,” Chun said. “We need a first layer of offensive weapons stationed closer to North Korea’s nuclear and missile sites.”

Jon Wolfsthal, a nuclear expert who served on President Barack Obama’s national security council, said that in the South Korean context, “strategic assets” were all about giving “a tangible sense of reassurance” to the government in Seoul.

“The reassurance bucket is bottomless,” Wolfsthal said. “You can pour stuff into it and it’s never going to fill up.”

South Korean officials have been asking for fighter jets and ballistic missile-equipped submarines to be based on the peninsula, and have long simply wanted B-1Bs and B-52s to land rather than just fly over — all to give a sense of greater sense of commitment to South Korea.

But there are good logistical reasons why that can’t happen, said Wolfsthal. For one, South Korea doesn’t have airstrips long enough for big, heavy B-52s, and second, the U.S. does not want its high-tech fighter jets sitting within North Korean artillery range.

South Korea has been also flexing its military muscles by itself in response to North Korea’s provocations, practicing strikes on the North Korean nuclear test site at Punggye-ri at dawn Monday.

The South Korean military calculated the distance to the site and practiced having F-15 jet fighters accurately hit the target, the Joint Chiefs of Staff said.

The ministry also said it had seen signs of preparation for another ballistic missile launch and South Korea’s national intelligence service told lawmakers that it could be another intercontinental ballistic missile.

“There is a possibility that the North could make additional provocations by firing an ICBM toward the northern Pacific,” said Kim Byung-kee, a ruling party lawmaker, after being briefed by agency staff, according to the Yonhap News Agency.