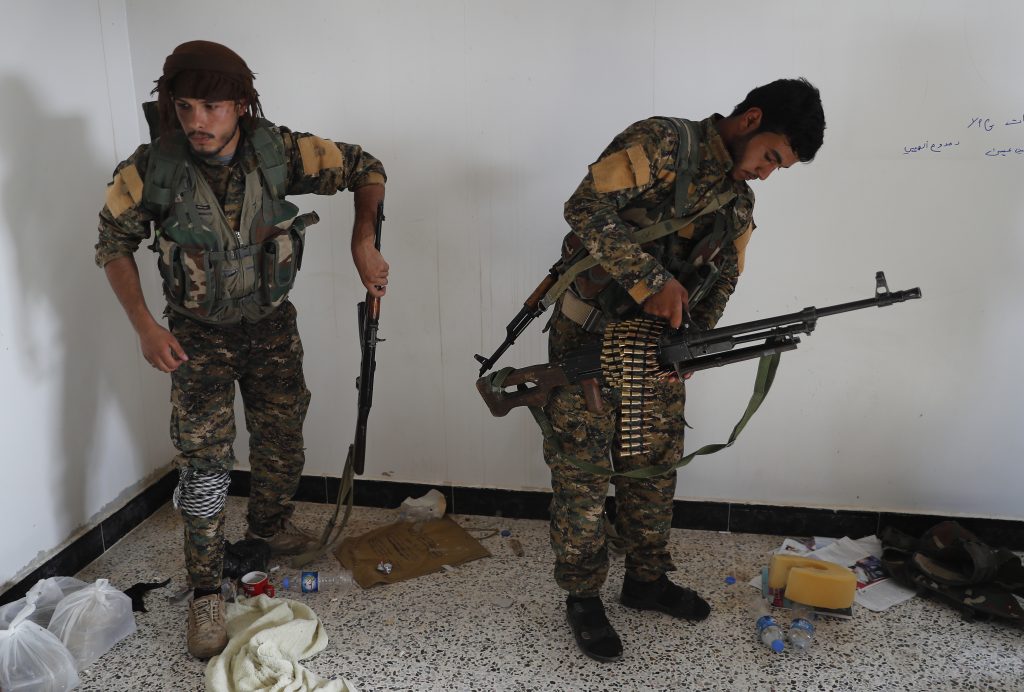 The two fighters, one an Arab sniper, the other his Kurdish commander, are each driven by a personal grudge against the Islamic State group. They are working side by side in an elite commando unit of the U.S.-backed forces fighting the terrorists in the Syrian city of Raqqa.

But they have vastly different visions of what happens once they succeed.

Abdullah, the Arab fighter, fears the terrorists’ fall in Raqqa will only be the start of more turmoil. He worries it will unleash a wave of bloodshed among the area’s Sunni Arab community, as residents seek revenge on neighbors who joined the group.

For Erdal, the Kurd and the unit commander, the battle for Raqqa is a step toward realizing his people’s dream of autonomy in the Kurdish heartland of northern Syria. Next, he and many other Kurds believe, will come a fight with their nemesis Turkey, which has sent troops into Syria in part to thwart Kurdish ambitions.

Another danger once IS falls is of a backlash among Raqqa’s Sunni Arab population against the Kurds. Many in the community deeply resent Kurdish ambitions and see their hopes for self-rule as intended to break apart the country.

The two men’s views reflect the differing priorities that run through the alliance between Kurdish and Arab fighters in the Syrian Democratic Forces, which the United States forged together to wage the fight against the Islamic State group. The SDF has proven a startling success in bringing together Kurds and Arabs. The more experienced and organized Kurds dominate command and some units are purely Kurd or purely Arab, but most SDF units are mixed, with few signs among the fighters of the tensions plaguing their communities at large as Kurdish influence grows in northern Syria.

It is largely the hands-on U.S. support that ensures that cohesion, raising questions over what happens when the American role eventually pulls back. For Arab fighters, the force is a chance to get vital training, funds and experience from the Americans, working alongside U.S. special forces advisers on the front lines. U.S. officials say the SDF, estimated at 50,000 fighters, is 50 percent Arab, with new recruits coming from liberated areas in Raqqa province.

This week, IS released a grisly video warning Arabs not to join with the Kurds. “You will regret it,” a bearded terrorist sitting by the banks of a river says, telling Arab tribes they will face “bitter revenge.” The footage then shows terrorists beheading a captured Arab fighter.

The Kurds, meanwhile, see the alliance with the United States as essential to securing their hold across northern Syria “from the threat of an attack by Turkey or the Syrian regime,” said Noah Bonsey, a Syria expert with the International Crisis Group. Moreover, the more they capture in eastern Syria the stronger their hand is in the future as all sides try to carve out zones of power in the country.

“If they don’t want the confrontation [with Turkey], [Washington] has to find a solution,” Erdal said on a recent afternoon only miles from the frontline in Raqqa.

Abdullah and Erdal spoke to The Associated Press between their unit’s assaults in the city. Both fighters go by one name to protect their identities. Erdal’s name is a nom de guerre, a common practice in the Kurdish People’s Protection Units, known as the YPG, which form the backbone of the SDF.

“What comes after IS, only G-d knows,” said Abdullah.

At 23, Erdal is an experienced veteran of the Syrian Kurds’ campaign to stake their claims. He has fought in the ranks of the YPG since he was 17 and took part in most of the major battles since, whether against Islamic State terrorists or against rival rebels in northern Syria.

In 2015, Erdal’s uncle was kidnapped by IS. For months, he remained in their custody until they beheaded him earlier this year along with others in a public square in Raqqa.

Erdal’s coming of age was in the 2016 battle with IS for the northern town of Manbij. That grueling, 3-month-long fight is a milestone burned into the Kurdish fighters’ consciousness. They lost hundreds of men before capturing the town, while learning key combat lessons. The fight cemented their place as the Americans’ main partner on the ground, but it was also the Kurdish hold on Manbij that prompted Turkey to send troops into Syria to push the YPG back from its borders.

Erdal and his superiors look at the Raqqa battle through the lens of Manbij battle.

“Manbij was much harder,” he said. With their ground shrinking inside Raqqa, the terrorists are less able to carry out their signature spectacular attacks using car bombs as they did in Raqqa, he said, speaking before heading off for a mission by the unit into the city.

“The next fight is with Turkey, 90 percent,” said Erdal. He accuses Turkey of using the Islamic terrorists to its advantage at times, to curb the aspirations of Kurdish groups.

Ankara sees the YPG as an extension of Kurdish insurgent groups in Turkey and calls all of them terrorists. Fearing the Syrian Kurdish forces’ newfound confidence, Turkey has picked a fight with them with skirmishes at Afrin, a town more than 200 kilometers (120 miles) away from Raqqa in northwest Syria.

That is where the next battle will be, many Kurds feel, putting the United States in a tough position between two allies. Confrontations have already flared in SDF-controlled Manbij where U.S. forces have deployed to ward off further tension.

“We can finish here and go support Afrin,” said Erdal, who married earlier this year.

Abdullah gets along well with his Kurdish commander. He and Erdal joke in Arabic, while the Syrian Kurdish language Kurmanji is more commonly heard on the battlefield among the commanders. At his urging, Erdal joined a troop dance ahead of the battle, performing the Arabic version of a traditional dance. Abdullah, meanwhile, wears the same colorful, beaded scarf that Kurdish fighters often wear on the front lines.

Erdal praises Abdullah’s prowess. During a recent thrust into Raqqa, Abdullah detected four IS terrorists trying to sneak up on the force and killed two of them.

Thin, sun-baked and constantly smoking, Abdullah came into Erdal’s unit with valuable experience: During his required military service years ago, he was in the 4th Armored Division, one of the best trained and equipped units in Syria’s military. Abdullah’s brother had joined the YPG earlier and was killed in battle with IS, something Abdullah and his commanders recall with pride.

“We are going to Raqqa for a reason. Revenge against IS,” Abdullah said.

In his hometown of Ain Issa, north of Raqqa city, he endured IS rule for three years.

In one instance, IS fighters beat him and forced him to beat his wife in public because she wasn’t adhering to IS’s strict dress code for women. It was a personal humiliation he said he can never forgive.

He also smuggled cigarettes into IS-run territory, prompting his arrest by the terrorists. He managed to escape, but IS in Raqqa still has his personal ID card.

So now, he jokes, he’s fighting to liberate Raqqa to get his card back.

But he said what comes after the Raqqa battle could be frightening: The city’s residents know their tormentors and abusers from the Islamic State group personally, since many were local Syrians, and will probably seek individual revenge. He said that after Raqqa falls, he and Arab fighters will “lay down our arms and stay at home. We want to avoid civil war.”

The other potential danger is fallout over who will run Raqqa. Some Arabs are wary of any sign that the Kurds are trying to dominate the region.

“The first fight will be which flag to raise in Raqqa after it is liberated,” said Ali al-Mattar, a 17-year-old Arab fighter in the same unit. He said the problem won’t be the Arab foot soldiers like himself but Arab commanders in the SDF who feel marginalized by Kurdish leaders.

The U.S. is trying to avert frictions by creating a policing force made up of Raqqa residents called the Internal Security Forces. So far, hundreds have graduated from American training, and plans are for some 4,000 members of the force to deploy in Raqqa.

Khaled Hendawi, a 23-year old Arab fighter with the SDF for more than a year, said Arabs in the ranks of the force don’t seek leadership yet. “We need to learn organization first if we want to be elevated.”

But that doesn’t mean there isn’t potential for strife.

“Anyone who starts by turning against the other side will be the biggest loser,” he said.