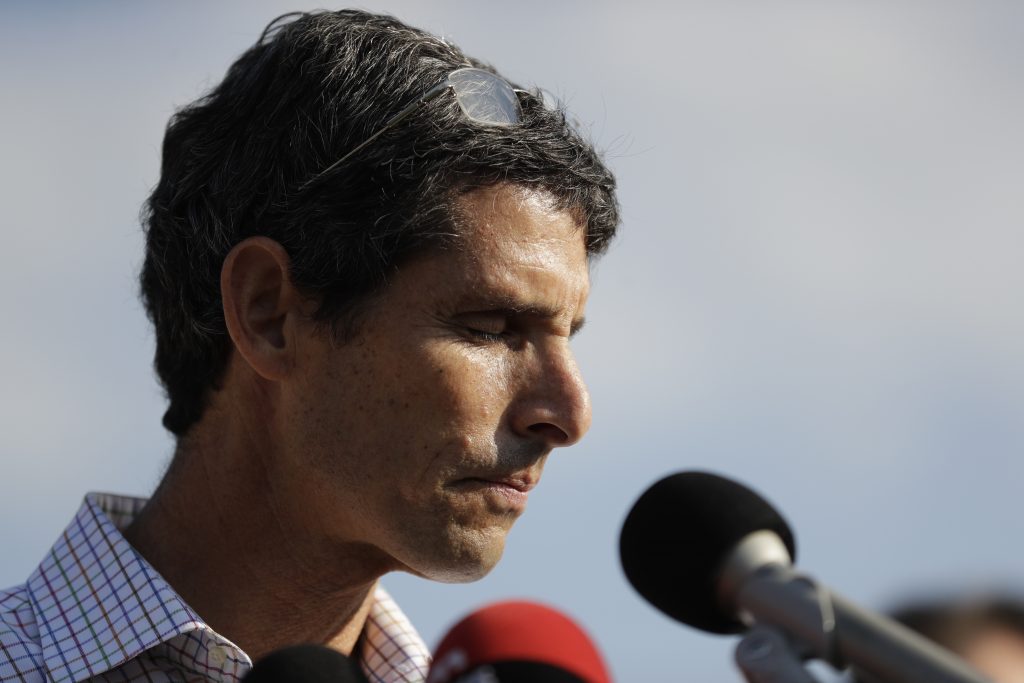 Fires and two explosions rocked a flooded Houston-area chemical plant early Thursday, sending up a plume that federal authorities described as “incredibly dangerous” and adding a potential new hazard to the aftermath of Harvey.

The blasts at the Arkema Inc. plant, about 25 miles northeast of Houston, also ignited a 30- to 40-foot flame. The French operator of the plant said up to eight more chemical containers could burn and explode.

Local officials insisted that the explosion produced no toxins.

The blasts happened as floodwaters from days of relentless rain began to recede and the threat of major dangers from the storm shifted to a region near the Texas-Louisiana line.

Fire authorities said the blasts were small and that some deputies suffered irritated eyes from the smoke, but they emphasized that the materials that caught fire shortly after midnight were not toxic.

Even so, the Texas Commission on Environmental Quality urged people in the area to stay indoors with their windows closed and air conditioners running, and to restrict physical activity. Particles from smoke and chemicals can affect people with heart and lung problems.

At a news conference in Washington, D.C., the administrator of the Federal Emergency Management Agency, Brock Long, told reporters that the plume was hazardous.

In the largely rural area surrounding the plant, officials said they went door to door to explain the situation and called on residents to evacuate, but leaving was not mandatory.

The plant, in Crosby, lost power after the storm, leaving it without refrigeration for chemicals that become volatile as temperatures rise. Arkema shut down the plant before Harvey made landfall.

As the sun rose, an AP photographer at a roadblock about two miles from the scene could see no sign of a blaze in the direction of the plant.

In Houston, the rescues continued apace. The fire department planned to begin a block-by-block search Thursday of thousands of flooded homes to look for anyone left behind in the floodwaters, a process that was expected to take one to two weeks, Assistant Fire Chief Richard Mann said.

The latest surveys indicate that the storm and floodwaters have caused major damage to more than 37,000 homes and destroyed nearly 7,000, the Texas Department of Public Safety reported.

Farther east, Beaumont and Port Arthur struggled with rising water after being pounded with what remained of the weakening storm.

The confirmed death toll climbed to at least 31, including six family members — four of them children — whose bodies were pulled Wednesday from a van that had been swept off a Houston bridge into a bayou.

Beaumont and Port Arthur worked to evacuate residents. Port Arthur found itself increasingly isolated as floodwaters swamped most major roads out of the city. More than 500 people — along with dozens of dogs, cats, a lizard and a monkey — took shelter at the Max Bowl bowling alley, general manager Jeff Tolliver said.

“The monkey was a little surprising, but we’re trying to help,” he said.

Floodwaters also toppled two oil storage tanks in South Texas, spilling almost 30,000 gallons of crude. It was not immediately clear whether any of the spilled oil was recovered. More damage to the oil industry infrastructure is expected to emerge as floodwaters recede.

Forecasters downgraded Harvey to a tropical depression late Wednesday from a tropical storm, but it still has lots of rain and potential damage to spread, with 4 to 8 inches forecast from the Louisiana-Texas line into Tennessee and Kentucky through Friday. Some spots may get as much as a foot, raising the risk of more flooding.

For much of the Houston area, forecasters said the rain is pretty much over.

“We have good news,” said Jeff Lindner, a meteorologist with the Harris County Flood Control District. “The water levels are going down.”

Residents were warned about the dangers of heat exhaustion if they have lost power or must toil outdoors, with temperatures expected to climb into the low 90s through the weekend.

Houston’s two major airports were up and running again Wednesday. Officials said they were resuming limited bus and light rail service as well as trash pickup.

At Hermann Park, south of downtown, children glided by in strollers and wagons, joggers took in midday runs and couples walked beside cascading fountains and beneath a sparkling sun. People pulled into drive-thru restaurants and emerged from a store with groceries.

At the same time, many thousands of Houston-area homes are under water and could stay that way for days or weeks. And Lindner cautioned that homes near at least one swollen bayou could still get flooded.

Houston-area 911 centers are getting more than 1,000 calls an hour from people seeking help, officials said.

Altogether, more than 1,000 homes in Texas were destroyed and close to 50,000 damaged, and over 32,000 people were in shelters across the state, emergency officials reported. About 10,000 more National Guard troops are being deployed to Texas, bringing the total to 24,000, Gov. Greg Abbott said.

In Orange, Texas, about 30 miles east of Beaumont, residents of a retirement home surrounded by thigh-deep water were rescued by National Guardsmen and wildlife officers, who carried them from the second floor and put them aboard an airboat.

Harvey initially came ashore as a Category 4 hurricane in Texas on Friday, then went back out to sea and lingered off the coast as a tropical storm for days, inundating flood-prone Houston.

Harvey’s five straight days of rain totaled close to 52 inches, the heaviest tropical downpour ever recorded in the continental U.S.