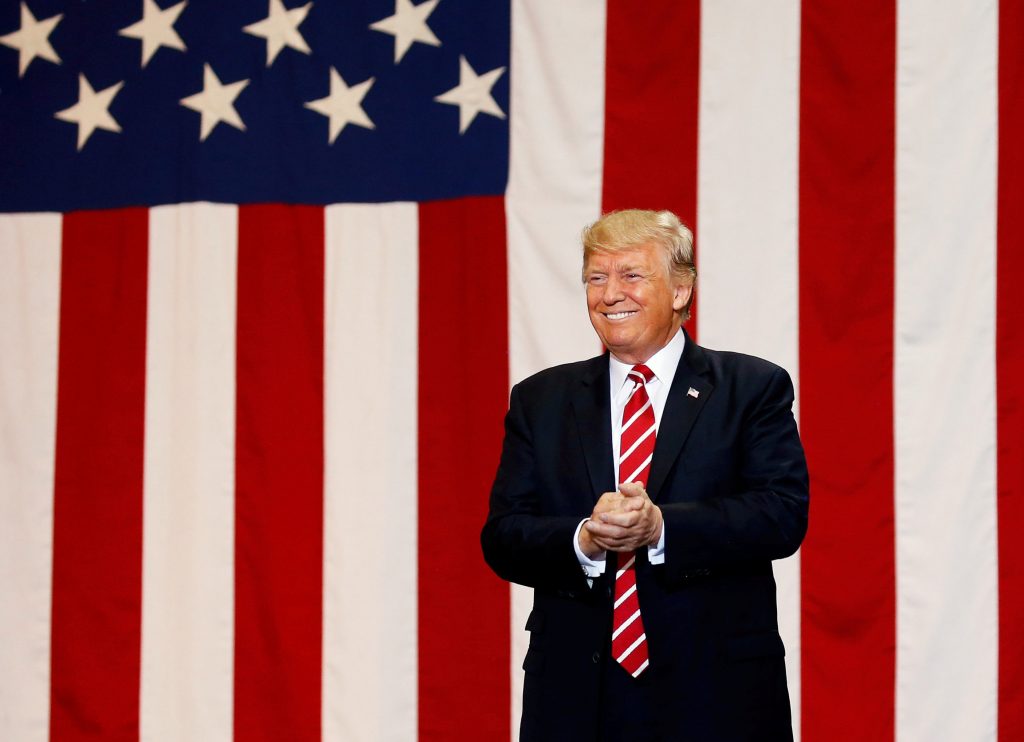 U.S. President Donald Trump revved up supporters on Tuesday with a defense of his response to a white supremacist-organized rally in Virginia and a promise to shut down the U.S. government if necessary to build a wall along the border with Mexico.

Under fire for saying “both sides” were to blame for the violence between white supremacists and left-wing counter protesters in Virginia on Aug. 12, Trump accused the media of ignoring his calls for unity in the aftermath.

Trump, who often uses news organizations as a foil, repeatedly singled out the media for criticism of how it covered the violence in the Virginia college town of Charlottesville and the resulting political fallout.

“These are truly dishonest people. They’re bad people. I really think they don’t like our country,” Trump said. “The only people giving a platform to these hate groups is the media.”

Adopting a glib tone, Trump said many reporters ignored his condemnation of white supremacists, including the Ku Klux Klan.

“I question his fitness to be in office,” Clapper told CNN.

Funding for the border wall has flagged in the U.S. Congress as many lawmakers question whether Trump’s main promise during the 2016 presidential election campaign is really necessary.

But with a budget battle looming, Trump said he would be willing to risk a politically damaging government shutdown in order to secure funding for the wall.

He visited the border region in Yuma, Arizona, earlier on Tuesday.

“If we have to close down our government, we’re building that wall,” Trump said. “We’re going to have our wall. The American people voted for immigration control. We’re going to get that wall.”

With thousands of supporters cheering him on, Trump also weighed in on another racially charged issue, hinting he would pardon former Maricopa County Sheriff Joe Arpaio.

Arpaio, 85, who battled illegal immigration in the Phoenix area, was found guilty last month of criminal contempt for violating the terms of a 2011 court order in a racial profiling case.

Trump covered the gamut of issues, from NAFTA trade talks to the U.S. showdown with North Korea, during a raucous, rambling and defiant political speech lasting an hour and 15 minutes.

He said he might terminate the NAFTA treaty with Mexico and Canada to jumpstart negotiations, and said the standoff with North Korea over its weapons programs might have taken a positive turn.

However, it was unclear whether the speech would help lay the foundation for a comeback from the deep political crisis Trump finds himself in after only seven months in office and an approval rating below 40 percent.

He expressed frustration that the Republican-controlled Congress was unable to approve health-care legislation that failed to pass the Senate by one vote last month.

One of the votes against the legislation was cast by Republican Senator John McCain of Arizona, who was recently diagnosed with brain cancer.

Without mentioning their names, Trump criticized both McCain and his fellow Arizona Republican, Senator Jeff Flake.

Neither McCain nor Flake attended the event.

Trump complained repeatedly about the “one vote” that stopped the Senate from repealing and replacing Obamacare, the signature domestic policy of his predecessor, Barack Obama.

“One vote away. I will not mention any names – very presidential. And nobody wants me to mention your other senator, who’s weak on border, weak on crime. Nobody knows who …. he is! See, I haven’t mentioned any names, so now everybody’s happy,” he said.

The White House had said earlier when asked about Arpaio that “there will be no discussion of that today.”

That did not stop Trump from raising the subject.

“Do the people in this room like Sheriff Joe?” Trump asked, sparking loud applause and a chant of “Pardon Joe!”

“Was Sheriff Joe convicted for doing his job?” Trump asked, before predicting that Arpaio would be just fine. “I won’t do it tonight because I don’t want to cause any controversy. But Sheriff Joe can feel good,” he said.

Trump drew broad criticism for blaming both white nationalists and counter-protesters for the deadly violence at the Charlottesville rally, which was organized by neo-Nazis and white supremacists. One woman was killed.

He mocked left-wing protesters in his speech.

Protesters outside Tuesday’s rally yelled: “Shame, shame, shame” and “No Trump, No KKK, No fascist USA” as the Trump supporters began filing into the Phoenix Convention Center.

Supporters, who lined up for hours in the Arizona heat ahead of the event, chanted: “Build the wall.” Many wore red hats with Trump’s campaign slogan, “Make America Great Again.”

Trump has held a series of 2020 re-election campaign stops despite only having taken office in January.

Phoenix Mayor Greg Stanton, a Democrat, had asked him to postpone Tuesday’s event while the nation healed from outrage and division after the deadly rally in Charlottesville.

A heavy police presence was deployed around the Phoenix venue for Trump’s first trip as president to Arizona, which he won in the 2016 election