National Neo-Nazis Rallied Around Jefferson’s Statue. But It Was a Jewish Family That Saved Monticello.
National 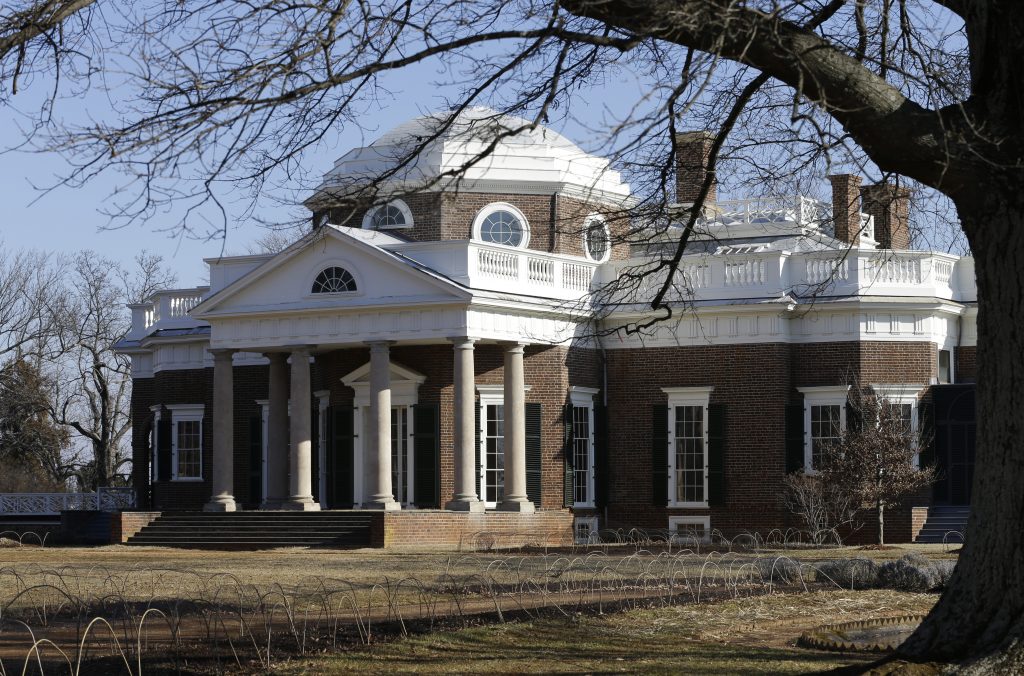 They swarmed the monument with Tiki torches that flickered in the dark, their shouts piercing what had been a quiet evening on the Lawn at the University of Virginia.

There, at the foot of the bronze statue of Thomas Jefferson, they chanted, “Jews will not replace us!”

The neo-Nazis and white supremacists who recently descended on Charlottesville ignored one key historical fact, among others: Monticello, Jefferson’s beloved iconic mansion just a few miles southeast, was saved from ruin by Jews.

Over the course of nearly 90 years after Jefferson’s death, two members of the illustrious Levy family purchased and personally saw to the preservation of the property. They did so out of a genuine reverence for Jefferson’s role as a Founding Father and for his advocacy of religious freedom. And they did so in the face of the very anti-Semitism that echoed on the streets of Charlottesville decades later.

The first member of the Levy family to own Monticello was Uriah Phillips Levy, a decorated naval officer who served as the first Jewish commodore of the U.S. Navy. He was a leader in the fight against flogging in the Navy and was a hero of the War of 1812. He was also quick to anger and was court-martialed six times, once killing a man in a duel.

As noted by historian Marc Leepson, Uriah Levy had to overcome “more than his share of anti-Semitism to attain the Navy’s highest rank.” Levy himself said that he was “forced to encounter a large share of the prejudice and hostility by which, for so many ages, the Jew has been persecuted.”

At least part of Levy’s admiration for Jefferson was born from the president’s support of religious equality. In addition to the Declaration of Independence, Jefferson penned the Virginia Statute for Religious Freedom. Such admiration ran in the family – in 1787, Uriah’s brother, Jonas Phillips Levy, wrote to the Constitutional Convention to call on the body to endow “all men” “the natural and unalienable right to worship almighty G-d according to their own conscience and understanding.”

Jefferson – a compulsive shopper burdened by substantial debt throughout his life – died at Monticello on July 4, 1826. His family was forced to sell much of his property, including the mansion, which was purchased by Uriah Levy in 1834 for $2,500. Like Jefferson, Levy was a slave owner, and enslaved people were used along with hired workers to repair the mansion.

Fictional tales of the purchase – which survived well into the 20th century – hint at the anti-Semitism swirling around Levy’s ownership. One popular and completely false retelling alleged that Uriah Levy took advantage of a drunk relative of Jefferson’s to purchase the property. One newspaper account included made-up dialogue between the two that characterized Levy as having a strong Yiddish accent, despite the fact that he was born in Philadelphia and was a fifth-generation American.

When he died in 1862, Uriah left behind no children, and his complicated will suggested he wanted Monticello to become a farm school for the orphans of Navy warrant officers. But before any arrangements could be made, Monticello and surrounding Virginia came under control of the Confederacy through the sequestration terms of the Alien Enemies Act.

No heavy fighting took place near Monticello during the Civil War. Soldiers and civilians alike visited the mansion, often leaving their personal marks behind by writing their names on the walls of the upstairs dome room and snatching souvenirs as they pleased. House furniture was broken, and Jefferson’s gravesite badly defaced. By 1865, the house was in ruin.

When the Civil War ended, the house returned to the heirs of Uriah Levy and would eventually come under the ownership of his nephew, Jefferson Monroe Levy, in 1879. Named for the deceased president, Jefferson Levy was a three-term New York congressman, businessman and lawyer who turned his immediate attention to the repair and renovation of the mansion.

“That place was never going to collapse, but it was in really bad shape twice,” Leepson said. “If it wasn’t for Uriah and Jefferson Levy, there’s a chance we wouldn’t have Monticello today.”

Susan Stein, the Richard Gilder senior curator at Monticello, agreed, saying the protection of Monticello by the Levy family “was one of the milestones in the history of historic preservation in America.”

But like his uncle, Jefferson Levy faced bigotry, this time from those who launched campaigns to place Monticello under federal control. Their main argument, Leepson said, was that the property shouldn’t be in private hands and should be open to the public.

“However, the entire campaign had more than a whiff of anti-Semitism,” Leepson said. “They used code words, referring to the Levys as ‘aliens’ and ‘outsiders.'”

Most of the effort to boot the Levy family from Monticello came from outside Charlottesville, namely from Maud Littleton, the wife of a New York congressman. Maud Littleton, according to Leepson’s book, gave speeches, congressional testimony and interviews threaded with nativist-style rhetoric and tropes of greed and lack of patriotism.

Jefferson Levy ultimately gave in to public pressure and, after Congress rejected his asking price of $500,000, sold Monticello to the Thomas Jefferson Memorial Foundation in 1923. In an interview he gave that year, Jefferson Levy estimated that he and his family had collectively invested $2.4 million in the property between its purchase, the cost of keeping it up, repairs after the Civil War and the interest on the money sunk in the property.

Levy also made contributions to Jefferson’s beloved University of Virginia, donating a regulator clock for the library and a device that electronically controlled the bells in each of the university’s lecture halls. He also provided for the replacement of two steel clock dials for the Rotunda, which had been destroyed in an 1895 fire.

Yet it would be decades before the Jefferson foundation fully acknowledged the Levy family’s role in saving Monticello. Levy descendants felt unwelcome when they tried to visit, despite the fact that Uriah’s mother, Rachel Phillips Levy, was buried on the property.

In Leepson’s book, Jefferson Levy’s grandniece, Harley Lewis, recounted how her parents observed what was, for a time, likely the only nod to her family’s history at Monticello. Back then, she said, a plaque near Monticello’s gate read: “Uriah Phillips Levy, a Jew, purchased Monticello for $2,500 and later sold it.”

It wasn’t until the mid-1970s that the foundation began acknowledging all the Levys had done at Monticello. In 1985, Lewis, among other descendants, took part in a commemorative ceremony on the property that included the unveiling of a new plaque at Rachel Levy’s grave. The visitor center contains a display on the full story of the Levys’ ownership.

For decades, Uriah and Jefferson Levy had been branded as intruders, their crucial role in the preservation of Monticello largely forgotten. It was certainly a fact that went ignored as neo-Nazis encircled Jefferson’s statue – a masterpiece of Moses Ezekiel, a Jewish sculptor and soldier.

In an interview with The Washington Post, Lewis said she wanted to believe that the anti-Semitism her ancestors encountered had “all disappeared.” Now she knows it hasn’t. But much as it did when Uriah and Jefferson Levy came to town, she knows the bigots weren’t from Charlottesville.

“These are outsiders that came in,” she said.