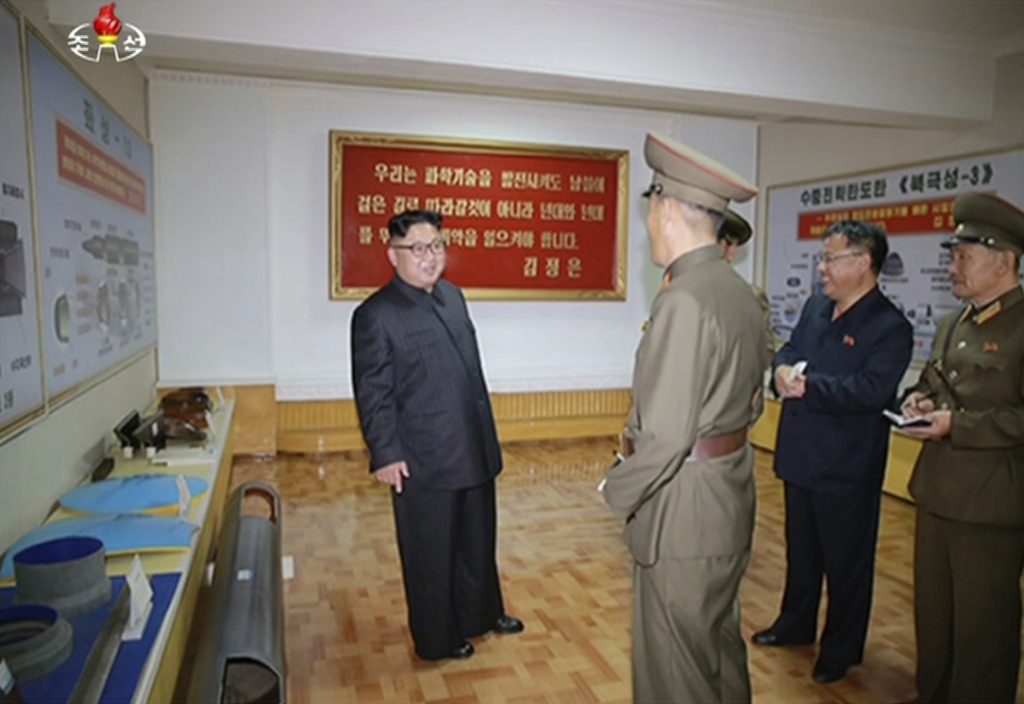 North Korea’s state media released photos Wednesday that appear to show the designs of one or possibly two new missiles.

Concept diagrams of the missiles were seen hanging on a wall behind leader Kim Jong Un while he visited a plant that makes solid-fuel engines for the country’s ballistic-missile program.

One of the photos clearly showed a diagram for a missile called “Pukguksong-3,” which appears to be the latest in its Pukguksong, or Polaris, series. The other was harder to discern, though it carried a “Hwasong,” or Mars, designation name.

The photos were carried in the morning edition of the Rodong Sinmun, the ruling party’s newspaper, and released by the Korean Central News Agency just two days after the United States and South Korea began annual military exercises that the North claims are a rehearsal for war.

Tensions on the peninsula generally ratchet up during the maneuvers and a series of larger exercises held each spring.

The KCNA report on the visit said Kim called on workers at the plant to produce more solid-fuel rocket engines and rocket warhead tips.

Michael Duitsman, a research associate at the Center for Non-Proliferation Studies, said the first missile has not been seen before.

“The Pukguksong-3 is definitely new,” he said in an email to the AP.

The missile might be designed to fly farther and to be launched from protective canisters, which allow missiles to be transported more easily and makes them more difficult to locate and destroy in advance. Solid-fuel engines add to that difficulty because they allow for quicker launches than liquid-fuel missiles. It could possibly also boost the North’s submarine-launched missile capabilities.

North Korea successfully tested the submarine-launched Pukguksong-1 in August last year. It then followed up with a successful test of the land-based Pukguksong-2 in February this year. Both are believed to have intermediate ranges that could target Japan and the U.S. bases there but not the mainland United States.

The submarine and land-based technologies overlap, and developments in either can benefit both.

“It’s pretty smart to use the same missile design for both an SLBM and a land-based variant, the key being the canister,” said Vipin Narang, an associate professor of political science at the Massachusetts Institute of Technology who focuses on nuclear proliferation. “On land it’s easier to move and store, and fire. And you need a canister-based system for ejection at sea.”

Duitsman said the quality of the pictures made it hard to immediately distinguish what the other missile was — though he said it was likely either a Hwasong-13 or Hwasong-11.

Hwasong is what North Korea calls most of its missiles, including its only ICBM — the Hwasong-14, which it tested last month. That missile is believed capable of reaching the U.S. mainland, though it probably needs another year or more of fine-tuning before it could be a serious threat.

“If it is the Hwasong-13, then there has been an enormous change to the design,” he said. “The Hwasong-13 was originally paraded in 2012 as a liquid-fueled missile.”

He cautioned that more analysis is needed.

“Changing an entire missile from liquid to solid fuel, or vice versa, is generally something you don’t do,” he said. “The design principles are very different.”