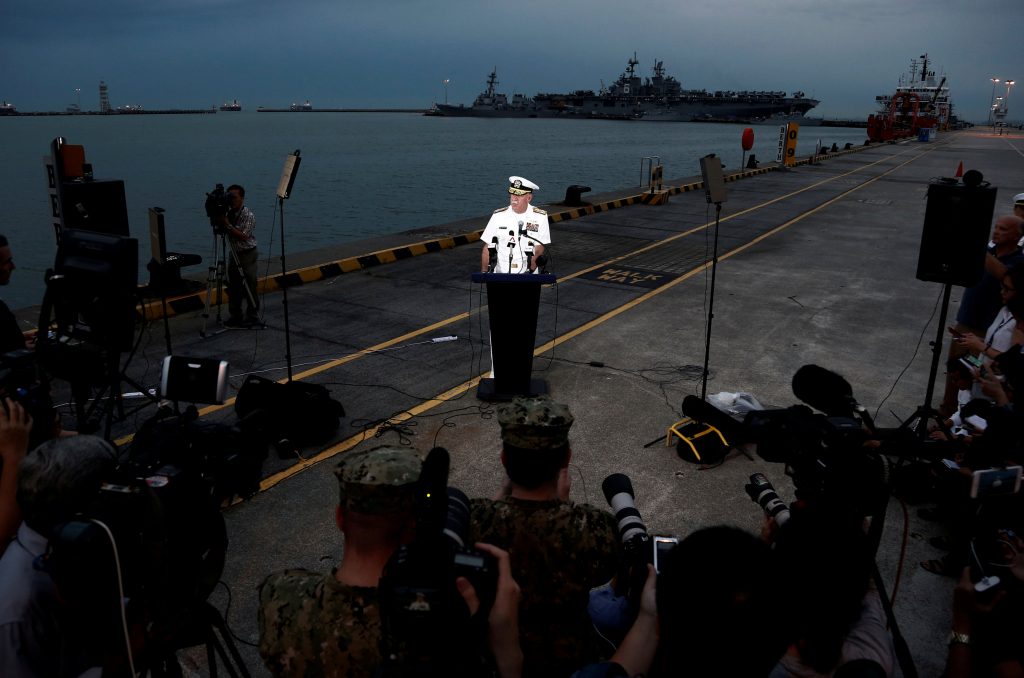 U.S. Navy and Marine Corps divers on Tuesday found some human remains inside sections of a U.S. guided-missile destroyer that collided with a merchant vessel near Singapore, the commander of the U.S. Pacific Fleet said.

The USS John S. McCain and the tanker Alnic MC collided on Monday while the U.S. ship was approaching Singapore on a routine port call. The impact tore a hole in the warship’s port side at the waterline, flooding compartments that included a crew sleeping area.

U.S. Pacific Fleet Commander Admiral Scott Swift said an international search-and-rescue operation had found some remains and that the wider search for 10 sailors missing from the accident would continue until all hope was exhausted.

“The divers were able to locate some remains in those sealed compartments during their search,” Swift told reporters at Singapore’s Changi Naval Base where the USS John S McCain is docked for damage assessment.

“Additionally, the Malaysian authorities have reported that they have located potential remains. They are working to confirm and identify those remains.”

He did not specify how many bodies had been found.

The Malaysian navy said in a statement it had found a body eight nautical miles northwest of the collision site and it would transfer it to the U.S. Navy on Wednesday.

Swift also said Monday’s collision – the fourth major accident in the U.S. Pacific fleet this year – could not be viewed in isolation from other incidents and that investigations were seeking to find a “common cause at the root of these events.”

The John S. McCain’s sister ship, the Fitzgerald, almost sank off the coast of Japan after colliding with a Philippine container ship on June 17. The bodies of seven U.S. sailors were found in a flooded berthing area after that collision.

The latest accident has already prompted a fleet-wide investigation and plans for temporary halts in operations.

Vice President Mike Pence said to have sailors killed in two collisions this year was disconcerting.

“It’s just unacceptable and we’ll get to the bottom of it,” Pence told Fox News. “But right now our hearts are with the families of those that are lost and we honor them.”

Ships, aircraft and divers from an international search-and-rescue operation have been looking for the missing U.S. sailors to the east of the Singapore peninsula and Malaysia, near where the accident happened.

Aircraft from the amphibious assault ship the USS America, which was in port at Changi Naval Base, joined the search.

Earlier on Tuesday, divers equipped with surface-supplied air rigs got into compartments in damaged parts of the USS John S McCain.

Immediate efforts by the ship’s crew after the collision on Monday were able to halt flooding into other parts of the hull, the Seventh Fleet said in a statement on its website.

CNN, citing unidentified U.S. Navy officials, said early indications suggested the collision was caused by a steering malfunction as the warship approached the Strait of Malacca. Swift said it was too early to draw conclusions about the cause and whether it was the result of human error.

He also said there was no indication the collision was caused by a cyberattack but every scenario would be investigated.

Aircraft and vessels from Singapore, Malaysia and Indonesia have been helping with the search.

Swift said the U.S. Navy was sending a team to assess the damage before making a decision whether to move the ship or place it in drydock.

Five U.S. sailors were injured in the accident, although the U.S. Navy said none of those injuries was life-threatening.

On Monday, U.S. Chief of Naval Operations Admiral John Richardson said he was asking his fleet commanders worldwide for a one-to-two-day, staggered “operational pause” to discuss action to ensure safe and effective operations.

He also said a comprehensive review would examine the training of U.S. forces deployed to Japan. The U.S. Seventh Fleet is headquartered in Japan.

The accident comes at a tense time for the U.S. Navy in Asia. This month, the John S. McCain sailed within 12 nautical miles of an artificial island built by China in the disputed South China Sea, the latest “freedom of navigation” operation to counter what the United States sees as China’s efforts to control the waters.

The state-run China Daily said in an editorial that increased activities by U.S. warships in Asia-Pacific were a growing risk to commercial shipping.

Also this month, North Korea threatened to fire ballistic missiles toward the U.S. Pacific territory of Guam in a standoff over its nuclear and missile programs.