The Story Behind the Braekel Chicken: A Halachic Dispute

By Rabbi A. Y. Heschel 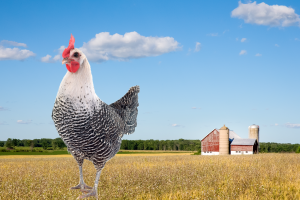 The Braekel (or Brakel) chicken is one of the oldest European chicken breeds. As far back as six centuries ago, it was already a successful poultry breed in the Belgium province whose name it carries. Once widely bred, in the past century its population diminished greatly, and nowadays it is actually considered a rare breed, making the fact that it is now at the center of a much-publicized halachic dispute particularly striking.

The Rabbanim who are prohibiting its use state unequivocally that it is an impure bird, but other Rabbanim state not only that it is certainly a kosher chicken, but that it is actually more reliably kosher than the ordinary commercial chickens now consumed by Jews around the world.

A comprehensive explanation of this complex halachic issue is beyond the parameters of this article. Our intention is only to give readers some background behind the issues being raised by Poskim who have weighed in on this issue.

Unlike animals and fish, for which the Torah gives specific signs to indicate whether a species is kosher or non-kosher, when it comes to fowl, the Torah does not give us any simanim. Rather, it lists the non-kosher species, with the understanding that all the others are kosher.

However, Chazal (Chulin 52a) do give us four signs of a kosher bird: an “added” toe; a crop; a gizzard (pipik) that can be peeled; and that the bird is not dores — that it does not claw and eat.

In addition, the Rema (Yoreh Deah, siman 82) rules that in order for a bird to be permitted for consumption it must also have a mesorah, a tradition passed down through the generations that this species is kosher.

A Question of Mesorah

Throughout the generations — in particular in the last 150 years — the kashrus status of various types of poultry was debated by leading halachic authorities. While there is no doubt that Klal Yisrael has always considered the chicken to be a kosher bird, many teshuvos have been written addressing the question of which type of fowl is included in the rubric of a “kosher chicken.”

Ironically, according to those who are promoting consumption of the Braekel, it was actually the concerns about the kashrus status of the types of chickens commonly being consumed in Jewish communities that prompted interest in breeding the Braekel in the first place.

The usage by poultry farmers throughout the world of cutting-edge breeding technology in their quest for increased profitability have caused some to raise questions as to whether non-kosher strains of poultry are being used in the breeding process of the regular commercial chicken.

Reportedly at the urging of Hagaon Harav Shmuel Wosner, zt”l, considerable efforts were made to locate a “pure breed” — a chicken whose mesorah and kashrus was unquestionable. The Rabbanim supporting the Braekel relate that 20 years ago they brought the Braekel chicken to Rav Wosner, who reportedly recognized it as the standard chicken that was raised in his youth. At that time, due to government regulations, the askanim couldn’t find a way to import and breed it for use in Eretz Yisrael, but in the past few years these obstacles were overcome.

The supporters of using this bird — which include the beis din of Harav Wosner, led by Harav Moshe Shaul Klein, shlita — insist that while the name “Braekel” may be unknown to most, this is actually the very same bird that as recently as a half-century ago was being slaughtered in Jewish centers in Europe, as well as in Eretz Yisrael, although it was known by other names. They cite the testimony of a number of elderly shochtim who say that they recall shechting birds that look very much like the Braekel.

The authorities who prohibit this bird — led by Harav Moshe Yehudah Leib Landau, shlita, Rav of Bnei Brak — cite other shochtim who identify it as an impure bird, and say that this particular strain, with its colors and characteristics, does not have a mesorah of being a kosher bird.

Some Rabbanim also cast doubt on whether, with the passage of so many years, it is possible to rely on the testimony of the elderly shochtim.

In addition, the Rabbanim prohibiting the bird cite the fact that among the identifying signs of a kosher bird is the way it arranges its toes. The Shulchan Aruch, quoting the Gemara, details a method of research. Stretch out a string and place the bird on it. If the bird positions two toes on one side of the string and two on the other, it is certainly a dores, and hence an impure bird. The Shach specifies that a species that exhibits this sign of a non-kosher bird is forbidden even if it is believed to have a mesorah.

If, however, the bird positions three toes on one side and one on the other, then it is possibly a kosher bird. In this case, provided that there is a known mesorah, and the other identifying signs are present, the bird may be eaten.

The Poskim prohibiting the Braekel state that they tested this bird this way — and it failed the test.

In response, those supporting the Braekel point out that only 12 years ago, similar questions were raised about the kashrus of the leghorn, a lightweight, long-tailed breed of chicken that produces all the eggs eaten in the U.S..

As reported in Hamodia at the time, reports that some of the leghorns were arranging their toes “two and two” raised concerns that breeding and genetic manipulation had created a new and possibly impure type of leghorn chicken.

At that time, the leading Poskim ruled that the leghorn was kosher, asserting that leghorns arrange their toes “two and two” only initially due to fear of humans, and after a limited time return to their natural arrangement of “three and one.”

When it comes to the Braekel there is no such consensus, with those who prohibit it insisting that, unlike the leghorn, this bird divides it toes in a way that is clearly defined as a sign of a non-kosher bird, and those permitting it arguing that the Braekel is actually no different in this regard from the chickens that are now deemed kosher and widely used.

“The natural way for these chickens to perch is to split their toes three and one,” one of the Rabbanim who has researched the matter but preferred not be named, told Hamodia, “but it has to feel comfortable enough to perch properly. We saw the same thing by the leghorns.”

Those prohibiting this chicken also cite the teaching of Chazal (Chulin 64a) that if both ends of an egg are rounded, or both are tapered, or the yolk is on the outside and the albumen is on the inside, the egg is not kosher. (There is a difference of opinion among the early authorities whether this rule is absolute. Some say that there is no such thing as a kosher bird laying such an egg, while others state that it is only that the vast majority don’t do so.) They assert that some of the eggs being laid by the original Braekel are rounded on both ends, yet another sign that this bird is impure.

Here, too, those who permit the Braekel reject the claim. They point out that a substantial percentage of the eggs we currently eat also seem to be rounded on both sides, and say that actually the Braekel has less of a problem than the regular chicken in this regard. (For a host of reasons, all contemporary Poskim permit the consumption of these eggs.)

Furthermore, they say that while the shape of Braekel eggs may be different than the eggs of the ordinary chickens now being used, they still are very much rounded on one end and tapered on the other.

One Rav who personally inspected the eggs of the Braekel told Hamodia that “these eggs look better than the ones we eat, and ‘beautifully’ fit the description of Chazal of being tapered on one side and rounded on the other.”

Those who brought the Braekel chicken to Eretz Yisrael had hoped that it would become a broadly accepted, even preferred alternative to the current breed, and that it would eventually be brought to the United States as well. For now, that seems unlikely.

Informed sources told Hamodia that some supporters of the project were still hoping that a way could be found to accomplish the original goal of providing Klal Yisrael with a purer chicken. Though they declined to go into details, they said it was possible that by making some changes to their plans, they could gain the approval of those currently prohibiting the Braekel. Whether this proves to be feasible remains to be seen.

The writer thanks Harav Yitzchak Stein, Faltishaner Dayan and Raavad of the Karslburger Beis Din, for his assistance in clarifying some of the halachic issues reported in this article.

As with all matters of halachah, readers should consult their own halachic authority.