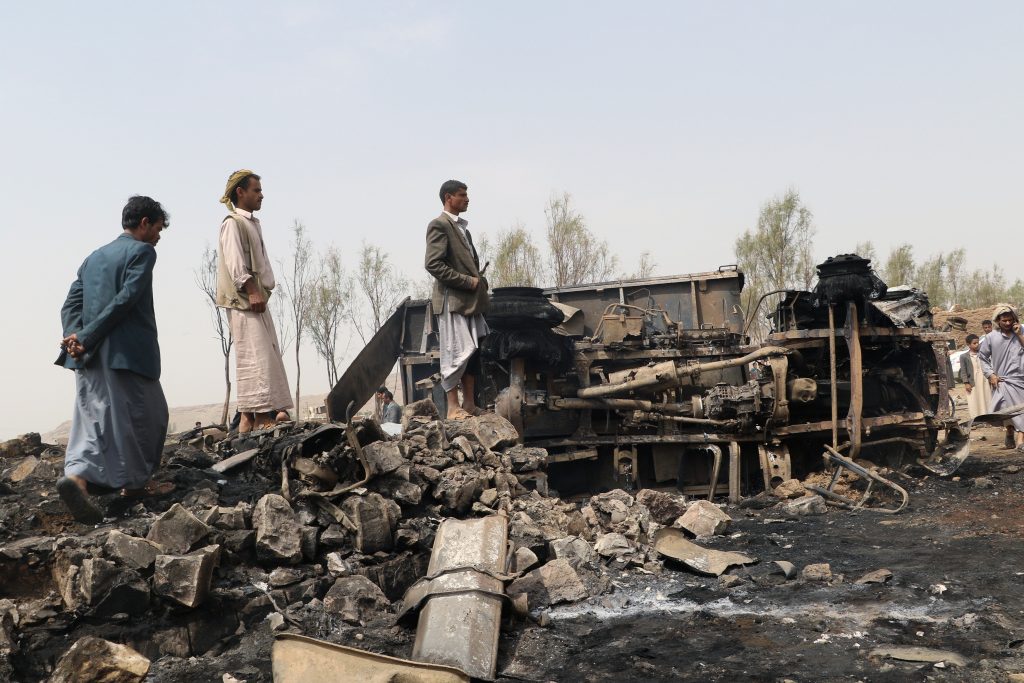 “The killing and maiming of children remained the most prevalent violation” of children’s rights in Yemen, according to the 41-page draft report obtained by Foreign Policy. “In the reporting period, attacks carried out by air were the cause of over half of all child casualties, with at least 349 children killed and 333 children injured.”

Saudi Arabia and its allies have been trying since March 2015, with U.S. backing, to force Houthi rebels out of power in Yemen. But the coalition’s air strikes have been heavily criticized for killing civilians, hobbling infrastructure, and destroying the country’s architectural heritage.

The chief author of the confidential report, Virginia Gamba, the U.N. chief’s special representative for children abused in war time, informed top U.N. officials Monday, that she intends to recommend the Saudi-led coalition be added to a list a countries and entities that kill and maim children, according to a well-placed source. The final decision will have to be taken by Guterres.

The Saudi-led coalition is the only force in Yemen with warplanes and helicopter gunships, making it the likely perpetrator of such acts.

The findings were included in a draft copy of the U.N.’s annual report of Children and Armed Conflict, which documented human rights violations of at least 15,500 children last year by government forces, terrorists and armed opposition groups in more than a dozen conflicts around the world. Four thousand documented abuses of children were attributed to governments, with the vast majority of remaining atrocities, 11,500, committed by terrorist organizations or insurgents.

Saudi officials have privately urged the U.N. to engage in further high level discussions before publishing the report. And they have enlisted the support of the United States, which has urged the U.N. not to list the Saudi-led coalition, saying it’s unfair to implicate all coalition members, even those who have not engaged in atrocities, according to two well-placed sources. In addition to Saudi Arabia, the coalition includes Bahrain, Egypt, Kuwait, Sudan and the United Arab Emirates.

Instead, Washington has pressed the U.N. to list only those individual states directly responsible for atrocities, according to those sources. But identifying specific states is complicated by the fact that the coalition does not release information on which coalition members are engaged in specific operations, according to officials.

An official at the U.S. mission to the U.N. challenged that account, saying “we have not pursued such an argument [with] anyone at the U.N.”

The publication of the report, which is expected to be issued later this month, presents Guterres with a tough dilemma: if he shames the Saudi coalition he runs the risk of provoking a break with the U.N.’s most influential Arab governments. But if he doesn’t act, he is likely to face charges of undermining the U.N.’s commitment to human rights.

In February, Guterres sought a middle way, suggesting to his top advisors that the U.N. delay the report’s release by three to six months to allow the coalition incentive to improve its conduct.

“Despite all the promises to show restraint that the Saudis have made to the U.N., the U.S. and the U.K., there haven’t really been any improvements in the lives of Yemeni children to brag about,” said Akshaya Kumar, the deputy U.N. representative for Human Rights Watch. “Schools are still being attacked, bombs are still being dropped, and children are still being killed.”