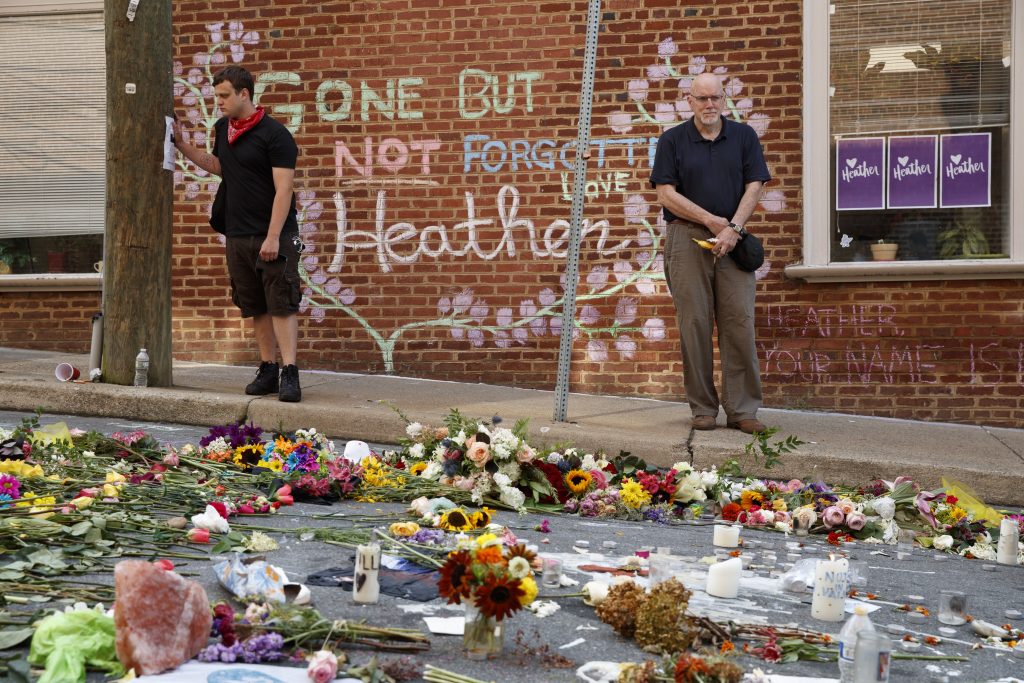 The grandfather of the woman who was killed in violent protests in Virginia said Wednesday she always wanted fairness, even from a young age.

Elwood Shrader said at a memorial service for Heather Heyer that she showed her passion for equality at an early age and swiftly called out something that wasn’t right. He told about 1,000 mourners gathered inside a theater in Charlottesville that she wanted respect for everyone and believed all lives matter.

Mark Heyer, her father, began speaking to the audience by saying no father should have to bury his child. He said his daughter wanted to “put down hate.”

The service for 32-year-old Heyer was held at the theater in Charlottesville, the sight of the deadly rally on Saturday. Attendees wore purple, Heyer’s favorite color, in her memory.

Mark Heyer said, “Heather’s passion extended to her ideas and her thoughts. She could tell if someone wasn’t being straight with her and she’d call them on it.”

So far, there were no sign of protesters outside the theater. White supremacists had threatened to attend, but none appeared to be at the site.

Heyer was a Charlottesville resident and legal assistant whose mother described her daughter as a courageous, principled woman and firm believer in justice and equality.

Heyer was among the hundreds of protesters who had gathered Saturday in Charlottesville to decry what was believed to be the largest gathering of white supremacists in a decade — including neo-Nazis, skinheads and Ku Klux Klan members. They descended on the city for a rally prompted by the city’s decision to remove a Confederate monument.

Chaos and violence erupted before the event even began, with counter-demonstrators and rally-goers clashing in the streets.

Authorities forced the crowd to disperse, and groups then began roaming through town. Counter-protesters had converged for a march along a downtown street when suddenly a Dodge Challenger barreled into them, hurling people into the air. Video shows the car reversing and hitting more people.

The Ohio man who police say was driving, 20-year-old James Alex Fields Jr., was described by a former high school teacher as an admirer of Adolf Hitler and Nazi Germany. He was quickly taken into custody and has been charged with second-degree murder and other counts.

Heyer grew up in nearby Greene County and worked as a legal assistant at a law firm. Her boss, Larry Miller, said the young woman was active in the firm’s bankruptcy practice and was like a family member to him.

“She’s very compassionate, she’s very precise, got a big heart, she wants to make sure that things are right. She cares about the people that we take care of. She’s just a great person,” Miller said.

Her mother, Susan Bro, said she would prefer to grieve in private but felt compelled to try to follow her daughter’s example.

“I miss her so, so much, but I’m going to make her death worth something,” Susan Bro told The Associated Press.

Charlottesville Police Chief Al Thomas said this week that his department is working with Heyer’s family to ensure the safety of those at vigils and other memorials.

The Paramount Theater, which is hosting the vigil, said in a statement that it had made arrangements for overflow attendees to view the service through a livestream.

Also killed Saturday were two Virginia State Police troopers who were aboard a helicopter that was providing video of the event before it broke off to lend support to a motorcade for Virginia Gov. Terry McAuliffe. The helicopter crashed outside of Charlottesville. An investigation into the crash is ongoing.

A funeral for Trooper-Pilot Berke M.M. Bates has been set for Friday, and a funeral for Lt. H. Jay Cullen, the helicopter’s pilot, is scheduled for Saturday.