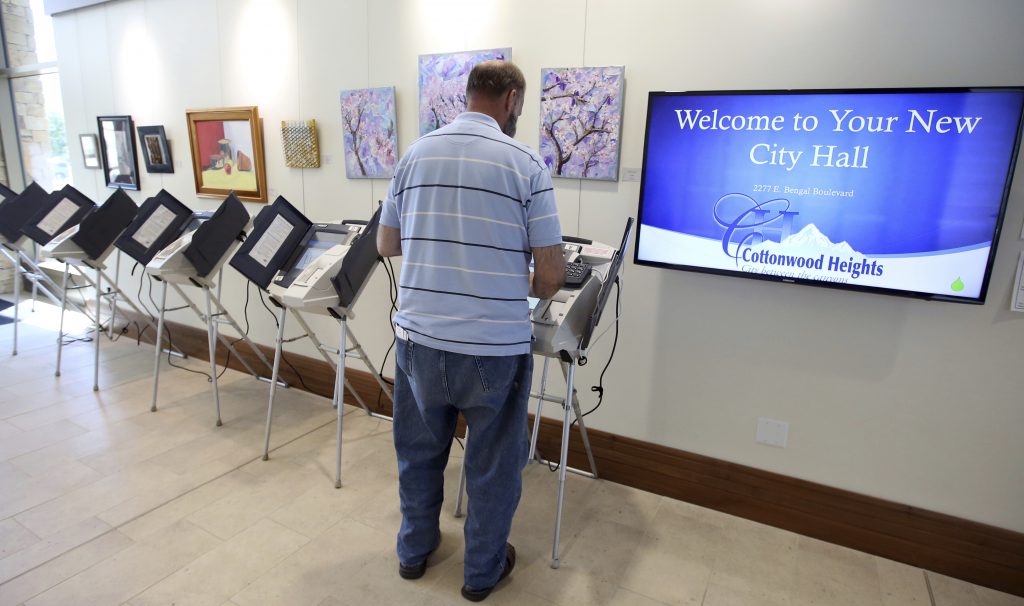 Votes are set to be tallied late Tuesday in the GOP primary that is expected to determine the next representative for the heavily Republican 3rd congressional district. But elections officials said they are being especially careful with the tally after House ballots were sent to roughly 68,000 voters not eligible to vote in the primary.

“If it’s anything near a close election, we aren’t going to know tonight,” Mark Thomas, Utah’s director of elections, said Tuesday.

The special election is being conducted primarily by mail in five of the seven counties comprising the 3rd district – including Utah County, where more than half of the voters in the district reside. Only registered Republicans are eligible to vote in the race, but Utah County elections officials mistakenly sent congressional ballots to unaffiliated voters as well.

Those voters were notified of the flub, Thomas said, and have the option of appearing in person at a voting center on Tuesday to register as Republicans. But he said the mail ballots in question would be segregated and counted only after all other day ballots are counted.

While polling has shown a clear front-runner in the race, recent surveys have suggested a tightening contest. The contest has generated hundreds of thousands of dollars in spending, and unusually heated political attacks, in a state known for its relatively subdued politics.

The race has flown largely under the national political radar, however, largely because the seat is of limited utility as a bellwether for President Trump. Unlike other House races decided this year, Democrats are not seriously contesting the heavily GOP district, and unlike in Tuesday’s Senate primary in Alabama, the Republican candidates’ postures toward Mr. Trump have not been a crucial factor.

Instead, the GOP primary in Utah is set to be decided along more familiar lines of ideology and sensibility in a state whose Republican voters have long had an uneasy relationship with Mr. Trump.

“The short answer is, President Trump has not been much of a factor in this race,” said Jason Perry, director of the Hinckley Institute of Politics at the University of Utah. “The answer from these candidates that has been resonating with Utahns is ‘We hold everyone accountable,’ and that is the extent of the influence of the Trump administration so far on this race.”

The front-runner for the Republican nomination, according to published polls, is Provo Mayor John Curtis, who has built a pro-business record during 61/2 years in office and has attracted support from the party establishment in and around the growing high-tech center south of Salt Lake City.

But despite declaring himself “the most conservative mayor that the state’s ever had” in an interview with The Salt Lake Tribune, Curtis’s bona fides have been sharply challenged by former state representative Chris Herrod and businessman Tanner Ainge, both of whom have sought to outflank Curtis from the right and have gained on Curtis in recent polls.

Herrod, who won his place on the ballot at a convention of party activists, has emerged as the candidate most openly supportive of Mr. Trump, though he has also won the endorsements of Trump’s former presidential primary rivals, Sens. Ted Cruz, R-Tex., and Rand Paul, R-Ky.

More crucially, Herrod has the backing of the conservative Club for Growth, which has spent nearly $300,000 to support him and attack his foes through mailers, radio spots and TV ads.

Ainge is the son of Danny Ainge, a household name in the Beehive State because of his basketball stardom at Brigham Young University and long careers as a professional player and executive. The 33-year-old is making his first run for public office with the help of a super PAC, Conservative Utah, that received the bulk of its $290,000 war chest from his mother, Michelle Toolson Ainge.

Both Herrod and Ainge, as well as their super PAC allies, have taken special aim at what they consider Curtis’ most egregious political sin: His past registration as a Democrat, made ahead of an unsuccessful challenge to a sitting Republican state legislator in 2000. Curtis later switched back to the GOP before another run in 2007; his mayoral post is nonpartisan.

Like Ainge, Curtis won his spot on the primary ballot by collecting voter signatures, bypassing a party convention dominated by conservative activists. He has won the endorsement of Utah’s popular Republican Gov. Gary R. Herbert and has sought to brush off the super PAC attacks.

Chaffetz, who gave up his post as House Oversight and Government Reform Committee chairman when he retired in June and now serves as a Fox News Channel commentator, has not made an endorsement in the race for his successor.

Polls are set to close in Utah at 8 p.m. Mountain Daylight Time, and Thomas said the first tallies could be released about a half-hour later, with election-day results updating through the night.