Technology What It’s Like To Ride a 6,000-Ton Icebreaker Through Arctic Waters
Health, Science & Technology 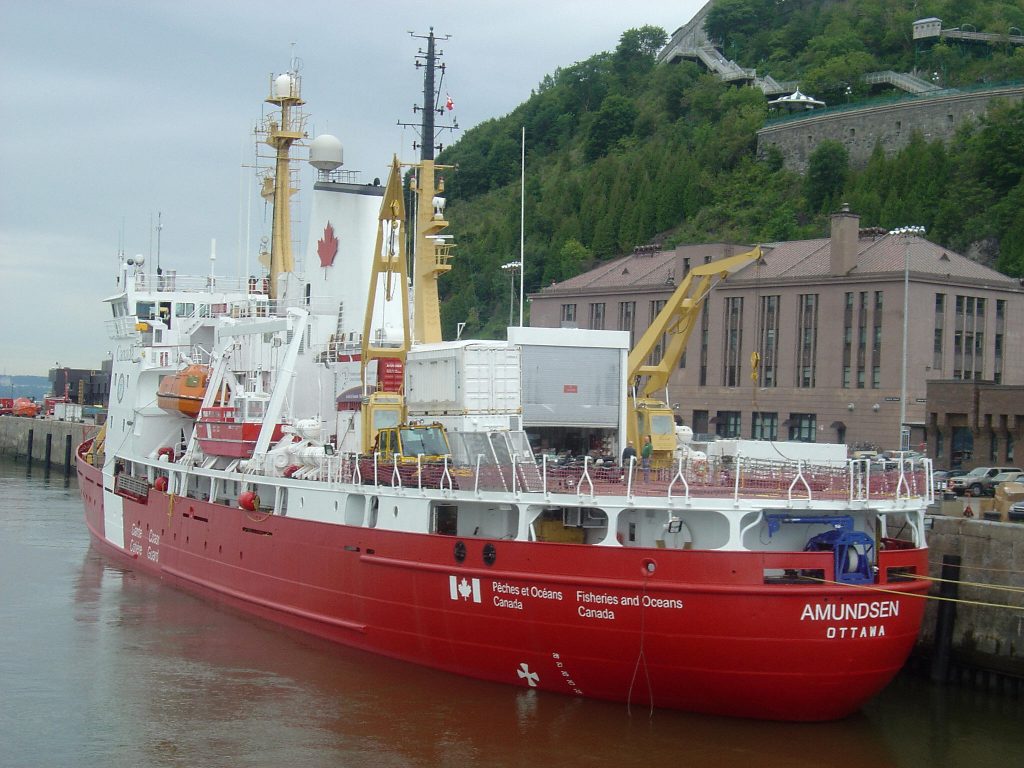 When the CCGS Amundsen breaks through a 10-foot (or thicker) piece of ice, it rides on top of it first, the whole front of the ship sliding onto the sheet as the boat comes to a stop. Then the ship, 100 yards long and weighing 6,000 tons, crushes down, and its sharp hull splits the ice and pushes the fragments to either side.

Here in the ice-clogged Victoria Strait, there’s much crushing to do. These are the icy waters that famously claimed the ships of Sir John Franklin in the late 1840s, even though he set out with Britain’s strongest steam-powered vessels of the time — and, climate change or not, they don’t feel so different today.

The Washington Post’s Alice Li and I are here to document a voyage of the CCGS Amundsen — a ship so famous in Canada that it is pictured on the $50 bill — as it navigates the waterways of the famous Northwest Passage. The boat is occupied by Canadian coast guard sailors and dozens of scientists from the ArcticNet consortium based at Université Laval in Quebec City.

The vessel’s crew and passengers are here researching how the waters of the Arctic are changing because of climate change and increased vessel traffic.

It’s a research mission that often involves impressive and expensive instruments, such as the gigantic 35-foot-long piston corer that plunges into the seafloor at high speed and extracts long cylinders of ancient mud, looking for clues on this environment’s state a thousand years ago, when it was covered with a sheet of ice.

They also use a tool known as the CTD Rosette, a device consisting of dozens of canisters that gathers up water samples to determine basic physical properties of the ocean, checking temperatures and salt levels as researchers investigate whether the seas are warming or currents are shifting.

But the Amundsen is also a coast guard ship and at any moment can be diverted from scientific pursuits to search and rescue, or to help out a vessel in need. Several days ago, we took a detour to provide some extra fuel and food to the U.S. Coast Guard Cutter Maple, which is making a Northwest Passage transit of its own — from Sitka, Alaska, to Baltimore — and needed a little extra supplies along the way. That resulted in a touching moment in which Canadian and U.S. personnel lined up on opposite decks to swap T-shirts, baseball caps and even a book.

And it’s not just coast-guard callings that can rapidly change the day’s plans — it’s the elements. Ice conditions are monitored in high detail, often via the ship’s helicopter, sent to gather knowledge far beyond what’s available from the official ice charts. As results come back, science schedules are constantly being torn up and rewritten.

“We try to accommodate all the science that we can, but then fog and ice and all these other variables that we have no control over, they chew on our contingency time,” says Martine Lizotte, the chief scientist on board and a research associate at the Université Laval in Quebec City. “And if we add something to the schedule, like breaking ice, then we have to subtract something else down the line.”

But the coast guard also benefits from having the scientists on board because it pushes it to explore areas that aren’t otherwise immediate coast guard priorities, said the ship’s commanding officer, Claude Lafrance.

“We usually go where the communities are or where the commercial ship goes,” Lafrance said. “If we did not have the ArcticNet and the scientists, the Arctic waters would stay with a lot of places uncharted or not known.”

In between stops, the scientists grab sleep when they can — they often hit their research sites in the wee hours of the morning and quickly throw their equipment over the side. There’s plenty of light to work by during those early hours, with the long hours of light from the summer Arctic sun. But the schedule does mean people on board are often tired, or at least keeping unusual sleep schedules.

The boat is filled more with students and graduate students than senior scientists — getting much-needed experience in taking cores from the seafloor or water samples. While on the deck working with the heavy equipment, they wear hard hats, steel-toed boots and “immersion” suits. The suits are there to keep you alive if you fall into the freezing waters, long enough for someone to rescue you.

When the students aren’t working on the deck or in specialized labs hosted in containers on the ship, they organized a scavenger hunt, ranging around the ship and looking at scientific posters and other displays to gather a list of information.

Life on board is modern and comfortable — the ship offers warm showers, expertly cooked food by a trio of Québécoise chefs, and even hot chocolate when you come in from the cold and ice. There’s a small gym and informally organized yoga classes.

There’s even formal Sunday dinner, where you’re supposed to get out of muddy science clothes and dress nicely. In the officer’s dining hall, food and wine is served by a wait staff. It’s all too easy to forget you’re in remote, rarely visited and dangerous waters.

Time on board is punctuated by loudspeaker announcements from the bridge, always in French first followed by English. (The Amundsen’s home port is Quebec City.) One of the most common is a warning not to smoke outside, because the helicopter is refueling — followed by a subsequent announcement when the refueling is done and smoking can resume.

Rarer, and far more anticipated, announcements alert all on board to the sighting of a polar bear or walrus perched on the ice. So far we have seen several — including a bear whose enormous head protruded from the water between ice floes as it swam in place and seemed to be bathing.

Sleeping on board is in bunks, two to a cabin — and often done despite the steady chirping sound of the echo sounder, which is busy measuring the ocean floor and sediments beneath the ship through the use of sound waves. You get used to it, or you find earplugs.

The ship’s dramatic shaking at night as it crushes through thick ice is ultimately a bit more unnerving. But the consolation is remembering that you’re on a vessel designed for just this — and one that goes out to rescue other ships that get in trouble in these waters.

A successful scientific cruise, Lizotte said, can be measured in many ways. It could be gauged by how many research stops are actually completed — but some are inevitably thwarted by the ice.

“But there’s also the human side of things, when you get off the ship and people are like, ‘I’ll call you,’ and we’ll meet and we have a beer,” she said. “We’ve developed bonds, and we meet after these cruises. I think that’s also a measure of success.”