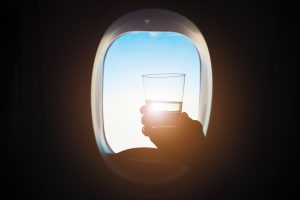 The budget airline issued a statement on Monday, calling for a ban on alcohol sales before 10 a.m. and for limiting the number of drinks in bars and restaurants to a maximum of two.

The airline cited Civil Aviation Authority statistics showing a 600 percent increase in disruptive incidents between 2012-2016 and said most involved alcohol.

Ryanair’s Kenny Jacobs says it’s unfair “that airports can profit from the unlimited sale of alcohol to passengers and leave the airlines to deal with the safety consequences.”

The airline says it has taken steps to prevent disruptive behavior on its flights, including preventing consumption of duty-free alcohol purchases on board.