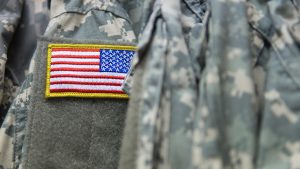 The United States military said that two American soldiers were killed during “combat operations” in northern Iraq on Sunday but that initial findings indicate the deaths were not caused by “enemy contact.”

A brief statement from the U.S.-led coalition fighting the Islamic State militant group said five other soldiers were injured in the incident. The statement did not provide any further detail, except to say that the casualties were being investigated.

A separate statement released by the Islamic State on Sunday, apparently referring to the same incident, said it had carried out a rocket attack on U.S. positions east of the Iraqi city of Tal Afar that the group claimed killed four American soldiers and injured six.

Col. Ryan Dillon, a spokesman for the U.S.-led coalition in Iraq and Syria, called the Islamic State claim “false” and said the casualties on Sunday were “not because of enemy fire.”

The Islamic State is increasingly on the defensive in Iraq and Syria after its defeat in the Iraqi city of Mosul and as U.S.-backed forces advance on the militant group’s onetime stronghold in the Syrian city of Raqqa. American officials have touted accelerating gains against the militants in the past six months, while crediting their success to policies adopted by the Trump administration, including the delegating of decision-making authority to commanders in the field.

But the Islamic State retains control of several towns in both countries that are populated by tens of thousands of civilians, and their safety has become a growing concern as the military campaign – especially coalition airstrikes – have intensified. The towns include Tal Afar, about 40 miles west of Mosul, where Iraqi troops and militiamen have been gathering ahead of what is expected to be the next major offensive in the campaign against the Islamic State.

U.S. officials have said that they expect a difficult battle in Tal Afar, where 20,000 to 40,000 civilians remain in what has been a busy hub for Islamic State leaders.

At least 6,000 U.S. troops remain in Iraq. The casualties on Sunday brought to four the number of U.S. soldiers killed this year in the country, according to iCasualties.org.