World Did Tillerson and Duterte Discuss Human Rights? Depends on Which Side You Ask.
World 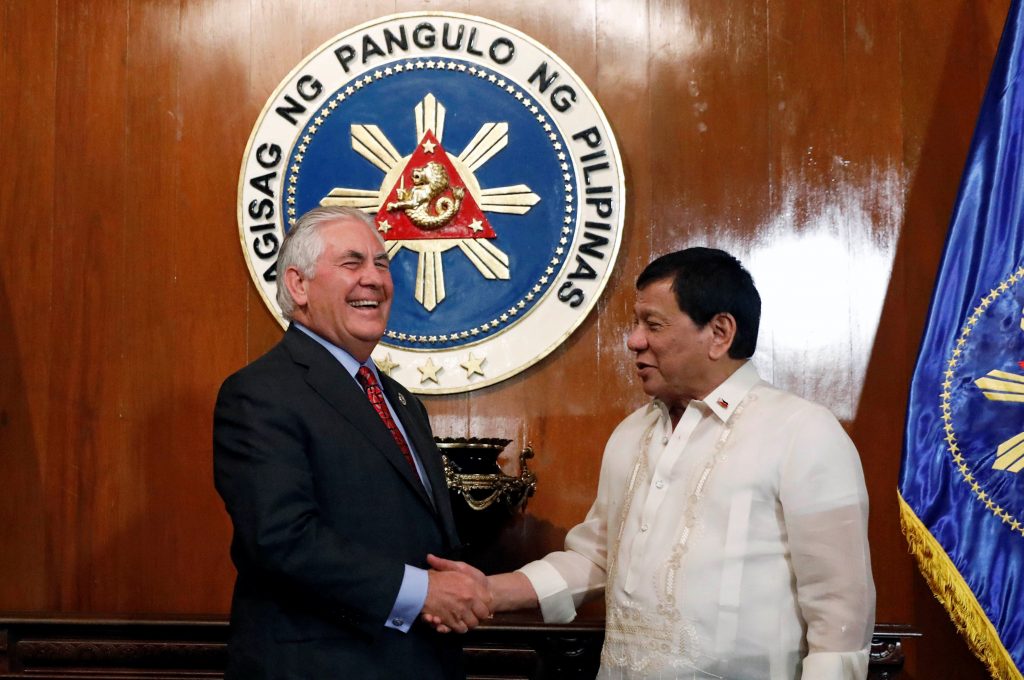 A senior State Department official on Tuesday pushed back against the assertion by Philippine President Rodrigo Duterte that Secretary of State Rex Tillerson minimized human rights concerns in a conversation they had a day earlier.

R.C. Hammond, a Tillerson aide who was present during the meeting Tuesday evening at Malacanang Palace in Manila, said Tillerson brought up U.S. criticism of a drug war in the Philippines that has left thousands of people dead. But he said Tillerson emphasized solutions, and made a general offer of U.S. assistance in combatting cartels.

“Mr. President, we are all aware of the American people’s criticism of you in your handling of the drug cartels,” Hammond quoted Tillerson telling Duterte during their hour-long meeting.

Tillerson explained how the United States and Mexico had cooperated in the war on dealers, according to Hammond, and offered to share tactics the two countries have learned.

Hammond said Tillerson’s offer of assistance was general in nature, and had no details such as specific steps or a dollar amount. He described Duterte’s response as cordial but noncommital.

“We provided a solution. It’s up to President Duterte what he would like to do,” Hammond said.

The State Department account of the meeting was strikingly different from the one Duterte provided during a press conference in Manila. Duterte told reporters that both the United States and Australia had “considerably toned down” their criticism of the Philippine war on illegal substances. Australian Foreign Minister Julie Bishop met with Duterte immediately before Tillerson was ushered in, forcing Tillerson to wait in a separate room for a spell before being summoned.

According to Duterte’s account, both Tillerson and Bishop raised the issue of human rights “only in passing.”

The dispute over the content of talks between the former Exxon executive who had no experience in diplomacy before becoming secretary of state and the controversial, often foul-mouthed Philippine president threatened to overshadow Tillerson’s relatively smooth performance at a regional conference in Manila. He spent much of it trying to corral countries into amping up the pressure against North Korea over its missile and nuclear testing.

It also could revive criticism that Tillerson has not shown as much passion for condemning human rights abuses as is traditionally exhibited by a secretary of state.

Questions about Tillerson’s talks with Duterte arose as he was visiting Thailand Tuesday to encourage the country to make the transition to constitutional democracy in elections scheduled next year. Tillerson was the highest ranking official to visit Thailand since a 2014 coup, arriving in a capital still draped in black bunting and mourning a monarch who died ten months ago.

According to a readout provided by the State Department, Tillerson told Prime Minister Prayuth Chan-ocha that the United States would help if needed in Thailand’s elections next year.

The stop also allowed Tillerson to continue his campaign of squeezing North Korea diplomatically and economically.

Bangkok’s relations with Pyongyang are minimal compared to China, which is responsible for 90 percent of North Korea’s economic trade.

But Thailand could become a model for what Tillerson is seeking elsewhere. Susan Thornton, the top U.S. diplomat for Asia, said the United States wants to see a reduced diplomatic presence at the North Korean embassy here, tighter visa rules for North Korean visitors, and a crackdown on North Korean trading firms that operate behind front companies. Washington also would like Bangkok to take the lead in freezing out North Korea diplomatically throughout the region.

At several turns, Tillerson, who visited Thailand often as an Exxon executive and professes a love for the country, played up ties between the United States and Thailand that originated two centuries ago.

But others were more personal and emotional. Tillerson called the late king Bhumibol Adulyadej — who was born in the United States — a “wonderful, wonderful friend to America,” and the “architect of the American-Thailand alliance.”

Tillerson and his traveling party wore black despite a muggy heat enveloping the capital, as do many Thais who still line up every day to view the king’s body. Before signing the condolence book, Tillerson and aides stood before a portrait of the late king at the Grand Palace, where his body lies, and simultaneously bowed.

Tillerson spent just five hours on the ground in Bangkok before heading to Malaysia, where he talked for about an hour with Prime Minister Najib Razak on his last stop before returning to Washington.