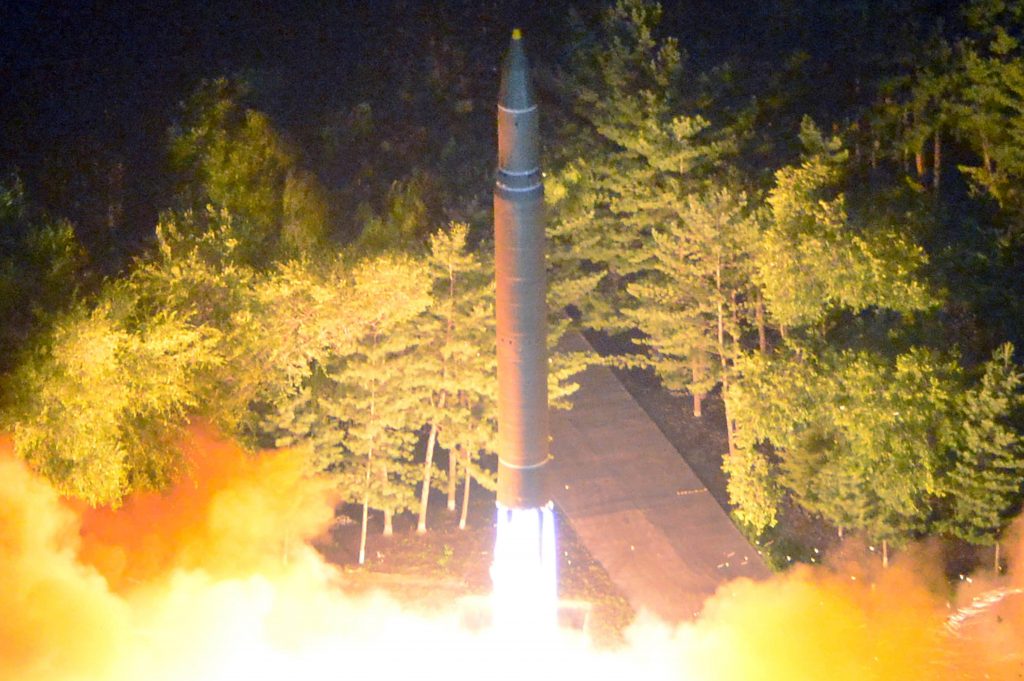 Japan warned on Tuesday against the acute threat posed by North Korea’s weapons programs as Pyongyang’s continued series of missile and nuclear tests, in defiance of U.N. sanctions, brings technological progress to the reclusive state.

“Since last year, when it forcibly implemented two nuclear tests and more than 20 ballistic missile launches, the security threats have entered a new stage,” it added in the 563-page document.

The growing threat has prompted Japanese municipalities to hold evacuation drills in case of a possible missile attack, and boosted demand for nuclear shelters.

Missiles launched on a lofted trajectory were difficult to intercept, the defense ministry said.

With North Korea pressing ahead with missile tests, a group of ruling party lawmakers led by Itsunori Onodera, who became defense minister on Thursday, urged Prime Minister Shinzo Abe in March to consider acquiring the capability to hit enemy bases.

If realized, that would be a drastic change in Japan’s defence posture. Tokyo has so far avoided taking the controversial and costly step of acquiring bombers or cruise missiles with the range to strike other countries.

“North Korea’s missiles represent a deepening threat. That, along with China’s continued threatening behavior in the East China Sea and South China Sea, is a major concern for Japan,” Onodera told a news briefing in Tokyo.

The ministry said the number of Japan’s jet scrambles against Chinese aircraft hit a record in the year to March 2017. The first confirmed advancement of China’s aircraft carrier to the Pacific also came in December 2016.

“There is a possibility that their naval activities, as well as air force activities, will pick up pace in the Sea of Japan from now on,” the ministry said.

“We need to keep a close eye on the Chinese naval force’s activity,” it added.

Tokyo’s ties with Beijing have long been plagued by a territorial dispute over a group of tiny, uninhabited East China Sea islets and the legacy of Japan’s wartime aggression.

Chinese Foreign Minister Wang Yi dismissed the white paper, telling state television in Manila, which he visited for a regional security meeting, that Japan was “playing the same old tune.”