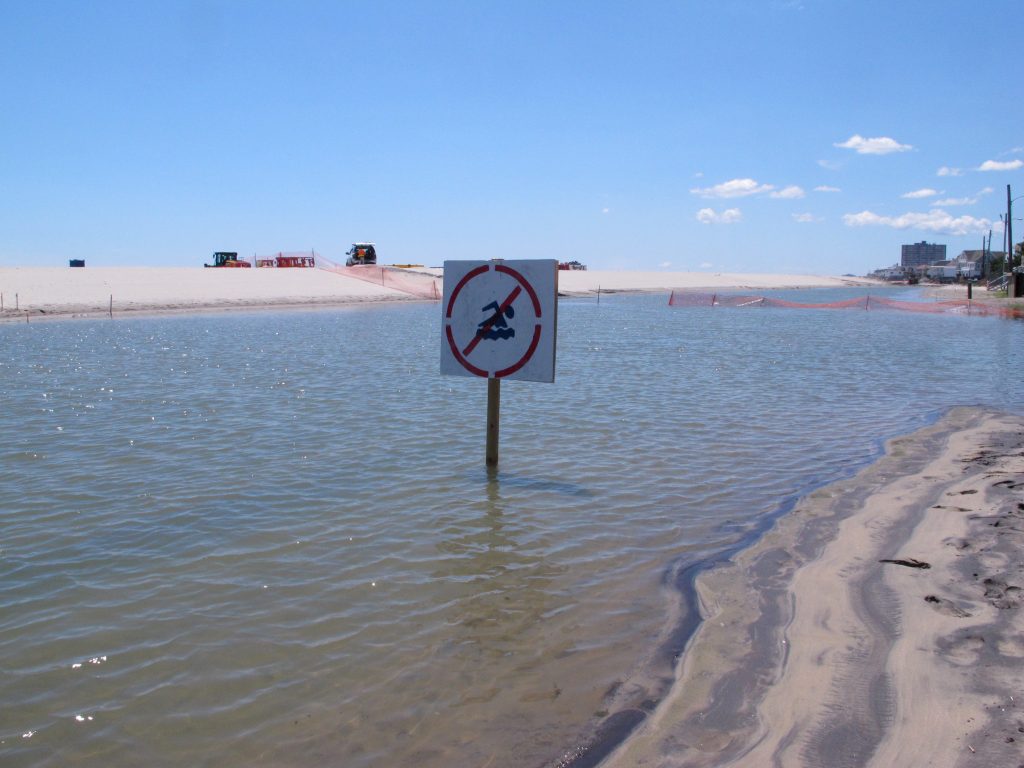 A soggy New Jersey shore town is resuming its costly and thus far futile court battle against protective sand dunes after huge bacteria-laden ponds formed along blocks of the beach, blocking access to the shore in numerous spots.

Officials in Margate, a coastal town south of Atlantic City, voted Wednesday to seek a court injunction to halt half-finished dune work that so far has created ponds of standing water.

The work is part of a statewide effort to protect New Jersey’s 127-mile coastline following the devastation that Superstorm Sandy caused in 2012. But Margate residents say their Sandy damage came mostly from the town’s bay side, not ocean side.

And in years of opposition and lawsuits trying to block the project before it started, Margate officials and homeowners argued that the dunes would just trap water up against a wooden bulkhead at the sand’s edge.

When weekend storms dumped a half-foot of water on Margate, that’s exactly what happened.

“‘I told you so’ is not a good feeling,” said Margate Commissioner Maury Blumberg. “There’s nothing more important to Margate than its beaches, and this project is killing us. My hope is that tomorrow this project is stopped dead in its tracks.”

The three-member city commission voted unanimously to hire a law firm to seek a court injunction halting the dune project until an adequate drainage system can be devised.

Mayor Michael Becker said state and federal officials have floated the idea of installing outfall pipes from the beach to the ocean at a cost of $10 million.

“I want this project stopped immediately,” he said. “We are suffering irreparable harm having it here.”

J. Scott Abbott, the city solicitor, said Margate plans to seek a court injunction on Thursday against the state Department of Environmental Protection and the U.S. Army Corps of Engineers in state or federal court. Representatives of both agencies did not immediately respond to requests for comment after Wednesday’s vote.

“It has been a disaster,” Abbott said. “Our engineer predicted exactly what has come to pass. Now you see what the fight was about.”

After the storms, three pools of water formed behind the dunes, some of them 2 feet deep or more. Days after state and federal engineers promised the water would have drained away, the water is still there, forcing grumbling residents to make blocks-long detours.

The Army Corps on Tuesday started pumping the water over the dunes as a short-term fix, and much of the water had been removed by midday Wednesday. But Margate officials are concerned about the toxic brew of contaminants being sent into the ocean, where — despite the obstacles to reach the beach — some swimmers continue to enter the water.

“They’re pumping contaminated water into the ocean,” Abbott said. “If a private individual did that, they’d be fined, if not jailed.”

Patti Deroo has an oceanfront house that her family built decades ago, which is near one of the ponds.

“A new lawsuit needs to be filed,” she said. “The city and the homeowners all said this was going to happen. Raising the bulkhead by six feet, now that would have made sense.

“The destruction of our beaches is incomprehensible,” she said. “And they don’t care. I actually feel physically ill from this. It’s so upsetting.”