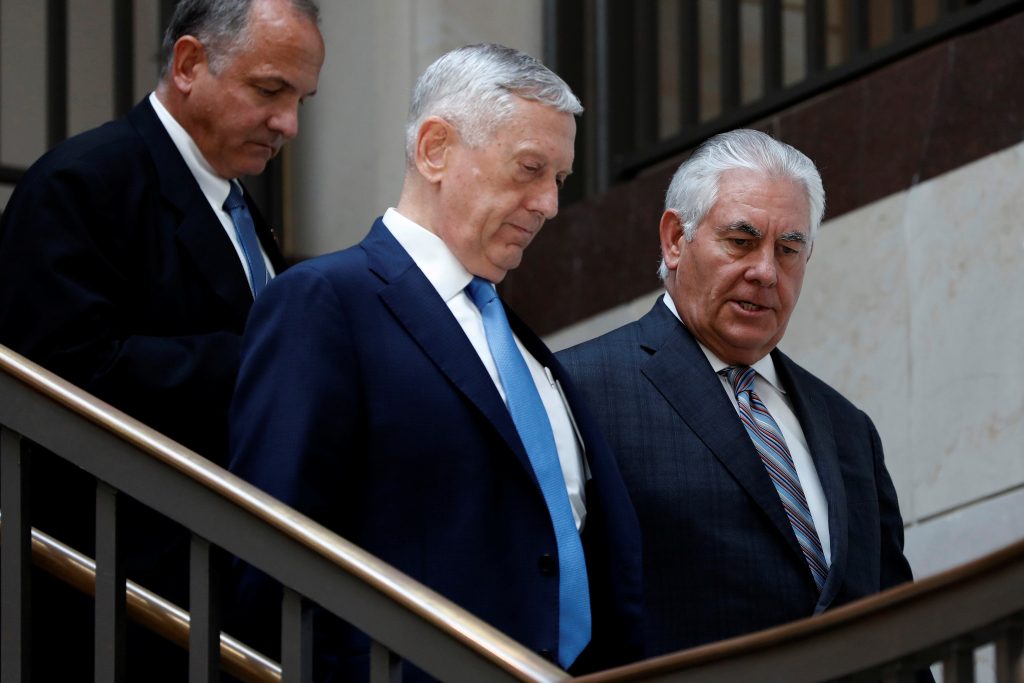 Officials from President Donald Trump’s administration are willing to work with Congress as it attempts to pass a new authorization for military operations against Islamic State, U.S. senators said on Wednesday.

Secretary of State Rex Tillerson and Secretary of Defense Jim Mattis testified at a classified Senate Foreign Relations Committee hearing, as it writes an authorization for the fight against the terrorist group in Syria and Iraq.

“They expressed a willingness to work on an authorization and I take them at their word,” Democratic Senator Chris Murphy told reporters.

Earlier Wednesday, State said in a letter to the committee’s Republican chairman, Senator Bob Corker, that the administration is not seeking any additional authorization or any revisions to a 2001 Authorization for the Use of Military Force (AUMF).

“The United States has sufficient legal authority to prosecute the campaign against al-Qa’ida and associated forces, including against the Islamic State of Iraq and Syria,” wrote Charles Faulkner of the Department’s Bureau of Legislative Affairs.

The 2001 AUMF, passed days after the Sept. 11 attacks to authorize the fight against al Qaeda and affiliates, has been used by presidents since as the legal basis for a wide range of military action.

Some members of Congress argue that it is long past time to repeal the 16-year-old authorization, especially for the campaign against Islamic State, which did not exist in 2001 and actually fights against al Qaeda in Syria and elsewhere.

The Constitution gives Congress, not the president, the right to approve such military action. Lawmakers have been struggling with the White House for a bigger say in foreign policy.

Corker said Tillerson and Mattis were open to a new AUMF “written in the appropriate way.” He said, “The administration’s not seeking an AUMF (but) … I’m confident they’ll work with us.”

It is not clear that any new AUMF could pass the Senate and House of Representatives. Attempts in recent years have come to nothing.

There are disagreements even within the committee over how to proceed.

Democratic Senator Tim Kaine, a leading advocate for a new AUMF, said Mattis and other military leaders agreed congressional action would send a message of resolve to U.S. adversaries and allies, and support the troops.

“They think for the mission itself, it would be good to have Congress engaged,” Kaine said.