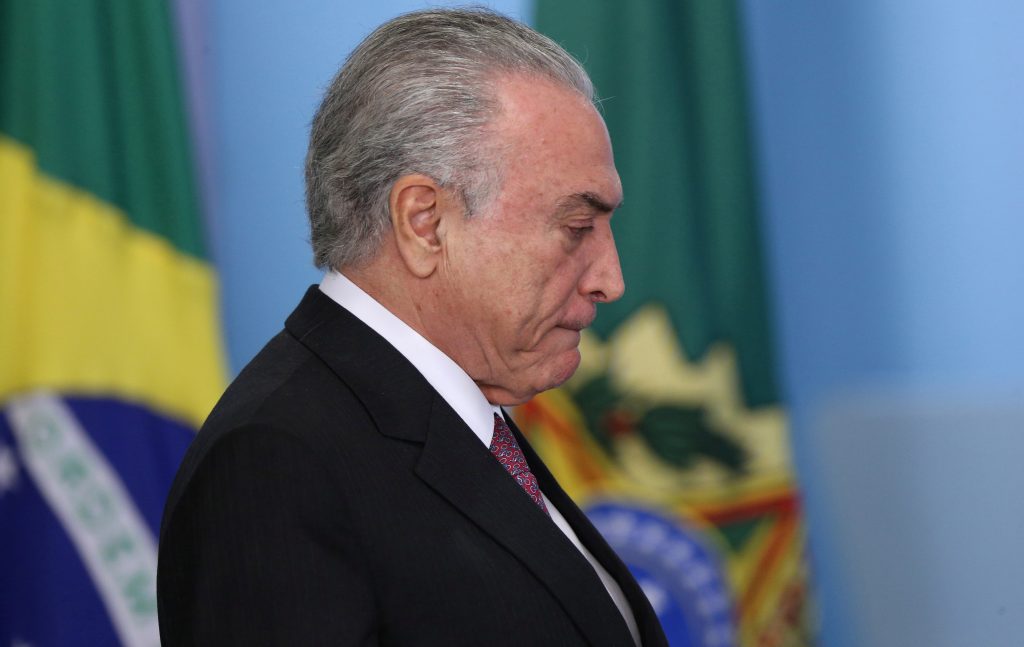 The lower house of Brazil’s Congress launched an unprecedented vote on Wednesday to greenlight a corruption trial against Michel Temer, the second Brazilian president to face possible suspension in a year.

If two-thirds of lawmakers in the Chamber of Deputies approve the charges, the president will be suspended for six months while he faces trial in the Supreme Court. Temer was aggressively courting legislators’ support down to the last hours before the session, which is expected to end in the late afternoon.

Even if he garners enough support in Congress to skirt the charges, Wednesday’s vote will serve as a referendum on Temer’s ability to govern a fractured coalition and pass unpopular reforms intended to lift the country out of a prolonged recession.

Temer, the first sitting Brazilian president charged with corruption, is accused of receiving $150,000 from a wealthy meatpacking executive — part of a $12 million bribe he allegedly accepted through an aide. Temer denies the accusations and has rejected calls for his resignation.

As the session began, dozens of representatives gathered in the center of the chamber, chanting: “Out Temer. The people want to vote. Direct elections now.”

In speeches ahead of the vote, Temer’s supporters avoided debates about the merits of the charges and focused instead on the importance of political stability for the country’s economy.

“The president chose to confront the crisis by delivering bitter but necessary medicine,” said representative Paulo Abi-Ackel of the coalition Brazilian Social Democracy Party. “Is now the right time to remove the president of the republic? We need to continue these efforts to reestablish confidence in the future of the country.”

But in Sao Paulo, hundreds of protesters opposing Temer, whose approval ratings sank to 5 percent ahead of the vote, lit tires on fire to block access to major highways.

While more than 80 percent of Brazilians believe that Temer should stand trial, according to a recent poll, he maintains a significant base in Congress. He is currently expected to gather about 260 votes in his favor, putting him safely above the 172 needed to evade trial, according to an analysis by political consultancy firm Arko in Brasilia, the capital.

In May, leaked recordings appeared to show the president condoning the payment of hush money to protect Joesley Batista, a meatpacking executive who was himself under investigation for corruption. A few weeks later, video emerged of a close aide exiting a pizza parlor with $150,000 in cash, allegedly intended for Temer.

The revelations sent shockwaves through Brasilia, which was already reeling from Operation Car Wash, a corruption investigation that has shredded Brazil’s political elite but that Temer until that point had largely eluded.

The president is determined to remain in power and has dismissed some ministers to allow them to cast their ballots as legislators in his defense. The night before the vote, Temer attended a dinner with more than 100 lawmakers at the home of the vice president of the lower chamber. He was greeted with applause and urged the legislators to help him usher in a new era in Brazilian politics.

Temer’s government pumped $25 million in federal funds into legislators’ pet projects after the accusations arose in May. That was a twelvefold increase from the month before, according to data from the Brazilian treasury. Over the past two months, he has also rewarded allied parties with prominent positions within his cabinet and fired coalition members whose parties broke with him.

His efforts may have fallen short, however. Hours before the vote, the Social Democracy Party, Temer’s largest coalition party, instructed supporters to vote in favor of the charges.

Even if Temer escapes unscathed from Wednesday’s vote, he is expected to be formally charged in the next few months with racketeering and obstruction of justice in connection with the same case. The Chamber of Deputies would also have to approve those charges before they go to trial.

While his supporters are betting that the president can withstand these accusations long enough to complete the 18 months left in his mandate, the scandal has paralyzed Temer’s government and stalled flagship reform programs that he hoped would promote recovery from Brazil’s longest recession on record.

If he is suspended, Temer would be the second Brazilian president to be ousted from office in one year. He rose to power after his predecessor and running mate, Dilma Rousseff, was impeached for budget mismanagement last August. Temer has suffered from dismal approval ratings since, with thousands of Brazilians questioning his right to rule.

“To pacify the country, we need direct elections. Temer does not have legitimacy,” said opposition member Weliton Prado. “We vote for the acceptance of the charges and want direct elections.”