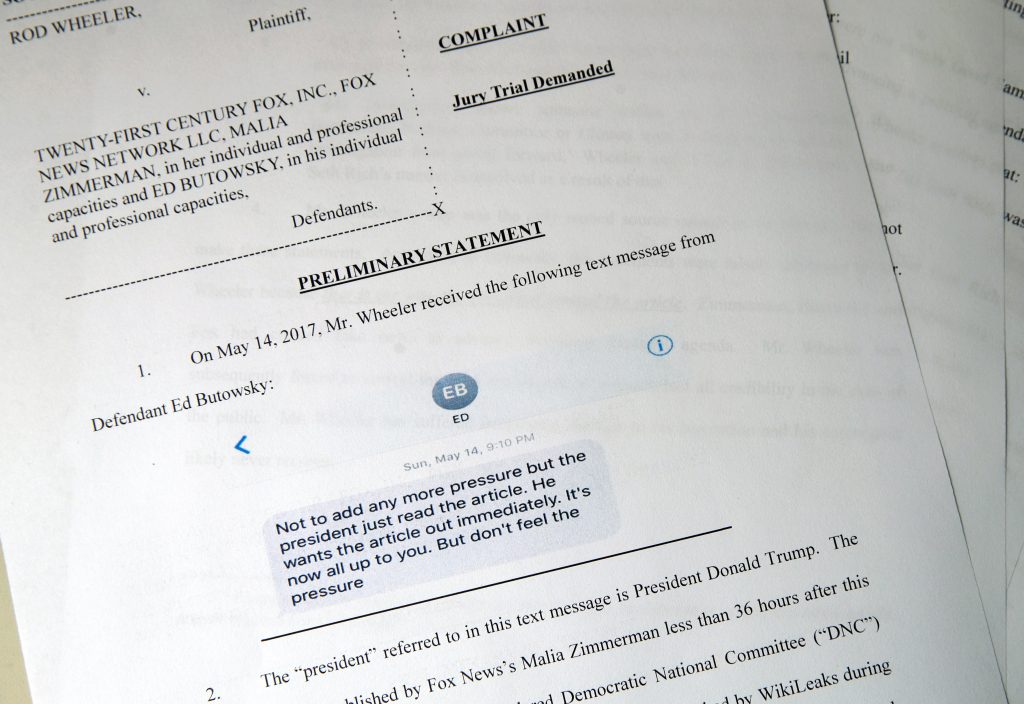 An investigator who worked on the Seth Rich case claims Fox News fabricated quotes implicating the murdered Democratic National Committee staffer in the WikiLeaks scandal and coordinated with the Trump administration as it worked on the story.

The investigator, Rod Wheeler, sued Fox for defamation. His lawsuit, filed Tuesday in New York, lays out an explosive tale of Trump allies conspiring to push a false story to take the pressure of the Russian collusion investigation off the president, and a news organization willing to show the president its story before it was published.

Fox called the accusation that reporter Malia Zimmerman’s story was published to detract from the Russian investigation “completely erroneous.” Jay Wallace, Fox’s news president, said the story is still being investigated and that Fox has no evidence that Wheeler was misquoted.

Wheeler, a Fox contributor who looked into Rich’s July 2016 murder for the family, was brought into the case by Ed Butowsky, a Texas man and Trump supporter who appeared frequently on Fox, the lawsuit said. Butowsky was intent on establishing a link between Rich, who was killed in July 2016 in what Washington police believe was a botched robbery, and the WikiLeaks scandal.

Wheeler was quoted in the May 16 story on Fox’s web site saying there had been contact between Rich and WikiLeaks, whose dump of DNC emails proved a major detriment to Hillary Clinton’s campaign. He also said he was quoted falsely saying that someone – possibly Democrats or Clinton campaign officials – was blocking an investigation into Rich’s murder.

Two days before the Fox article was published, Butowsky told Wheeler in a phone conversation that Pres. Trump had read the article and wanted it published immediately, the lawsuit said.

Wheeler also claimed that he was told that his false comments were put in the story because Trump wanted it that way. Wheeler also said that he and Butowsky had met with former White House Press Secretary Sean Spicer and showed Spicer notes on Wheeler’s investigation. Spicer asked to be kept informed of the probe, the lawsuit said.

Fox removed the story from its website a week after it was published, saying that “it was not initially subjected to the high degree of editorial scrutiny we require for all of our reporting.” That forced Fox News’ most high-profile host, Sean Hannity, to back away from aggressively pushing the story on the air.

At Tuesday’s White House briefing, Press Secretary Sarah Huckabee Sanders said that “the president had no knowledge of the story” and that “it’s completely untrue” that he or anyone at the White House was involved with the story.

She referred further questions to the parties involved in the suit.

Wheeler, who is black and has been a Fox contributor since 2005, is also suing Fox for racial discrimination. He said similar law-enforcement experts who are white were given higher pay and more opportunities. Wallace denied the accusations.