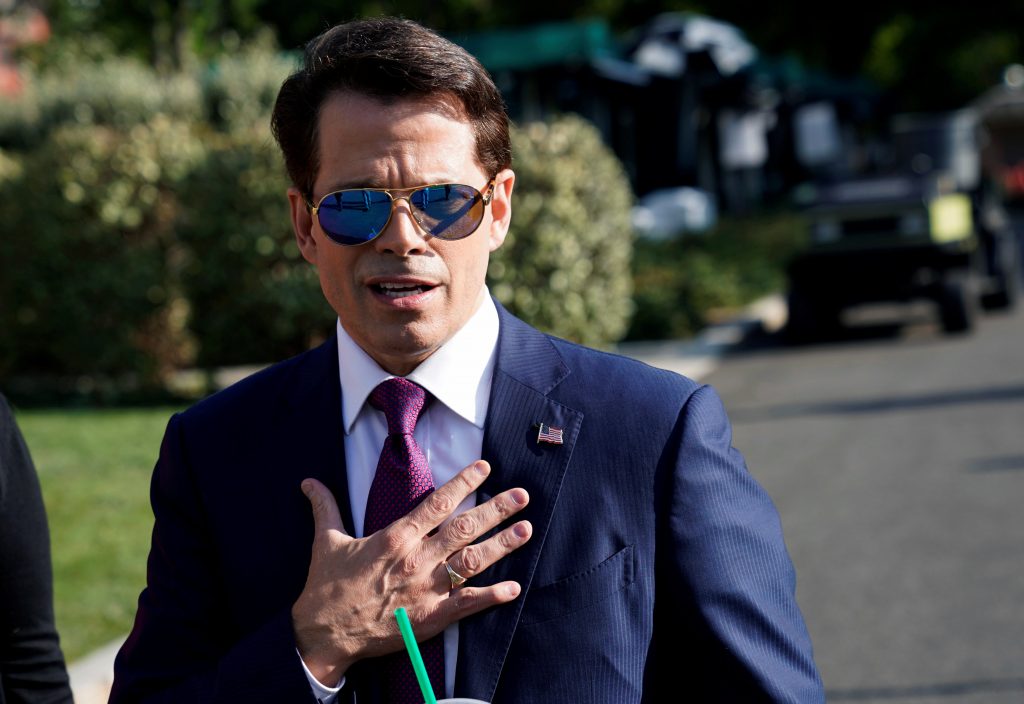 New White House communications director Anthony Scaramucci went after chief of staff Reince Priebus Thursday as a suspected “leaker” within the West Wing in a pull-no-punches interview that laid bare the personality clashes and internal turmoil of Donald Trump’s presidency.

“The fish stinks from the head down,” Scaramucci said after calling in to CNN for an interview that he said was authorized by Trump, the only person to whom Scaramucci reports. A say-anything New Yorker like his boss, Scaramucci, challenged Priebus to come forward and say publicly that he’s not a leaker.

In the clearest sign yet that the president and his new communications director are cut from the same cloth, Scaramucci has spent the past 12 hours publicly complaining about the “leak” of a public document, speculating on Twitter and calling in to  shows. He’s shown no hesitation to enlist what he describes as his “buddies” at the FBI to investigate anyone he believes is damaging the White House.

And he’s openly aired differences between himself and Priebus, comparing their relationship to that of brothers who are “rough on each other” and invoking Cain and Abel. One of those biblical brothers murdered the other.

“I don’t know if this is repairable or not — that will be up to the president,” Scaramucci said of his differences with Priebus.

It all appears to signal what could be a new and even less stable phase in Trump’s young presidency, with considerable energy devoted to palace intrigue and internal power struggles. And it comes as Republicans on Capitol Hill are having trouble advancing the president’s agenda and as investigators probe allegations of ties between the Trump campaign and Russian interference in the election last fall.

Scaramucci has been on the job less than a week, having been hired by the president against the wishes of Priebus and other senior officials, including adviser Steve Bannon.

His arrival marked the first in a series of falling dominoes that seemed to be leading toward Priebus, the chief of staff who as of Wednesday insisted he isn’t going anywhere.

Scaramucci then forced out another communications aide close with Priebus.

Scaramucci tweeted that someone had illegally leaked financial information about him, conspicuously mentioning Priebus’s Twitter handle. Scaramucci later deleted that tweet and said he had only mentioned Priebus to show that all senior leaders are taking the leak crackdown seriously.

“In light of the leak of my financial disclosure info which is a felony, I will be contacting @FBI and the @JusticeDept #swamp @Reince45,” his since-deleted tweet read.

Scaramucci’s financial disclosure wasn’t leaked at all. It was released after a public records request by a Politico reporter. Although he is new to the White House, Scaramucci had been employed at a senior level by the Export-Import Bank since June 19. After 30 days, the financial disclosure forms filed by senior administration officials are subject to public records requests.

As CNN was discussing the episode, Scaramucci called in — ripping a page from Trump’s own playbook.

“I can tell you two fish that don’t stink, and that’s me and the president,” Scaramucci declared. “I don’t like the activity going on in the White House. I don’t like what they’re doing to my friend.”

Later in the interview, Scaramucci addressed Priebus in even clearer terms.

“If Reince wants to explain that he’s not a leaker, let him do that,” Scaramucci said. He reiterated, “I can speak for my own actions. He’s going to need to speak for his own actions.”