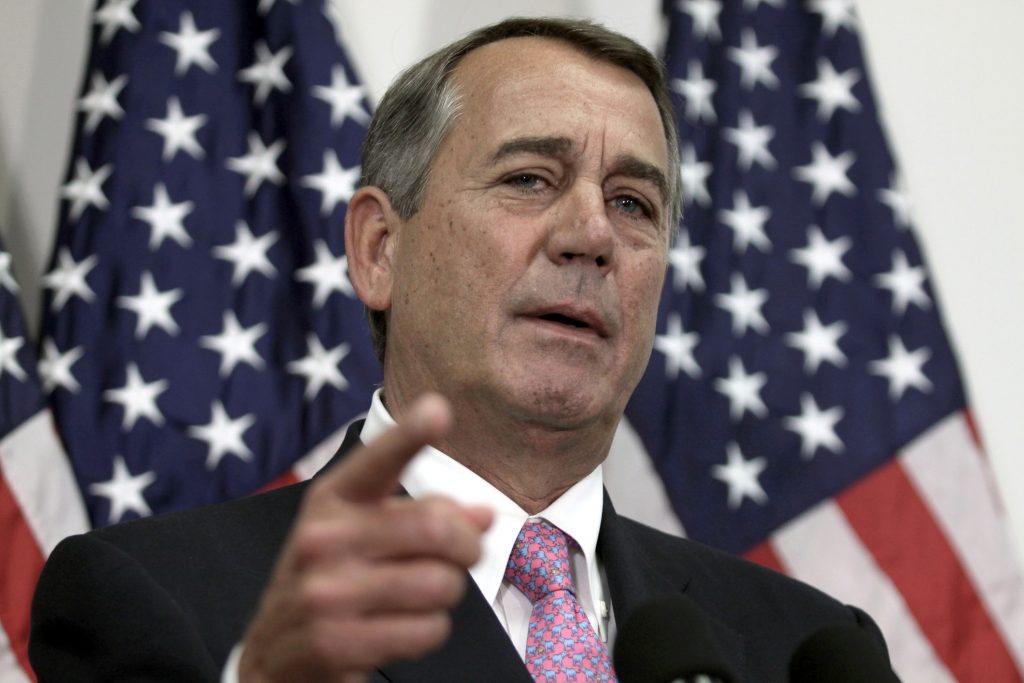 Former House speaker John A. Boehner, who has mostly avoided public commentary since leaving Congress two years ago, told a business gathering last week that Republicans are “not going to repeal and replace Obamacare” because “the American people have gotten accustomed to it.”

“Here we are, seven months into this year, and yet they’ve not passed this bill. Now, they’re never – they’re not going to repeal and replace Obamacare,” Boehner told a private crowd in Las Vegas, according to video footage obtained by The Washington Post. “It’s been around too long. And the American people have gotten accustomed to it. Governors have gotten accustomed to this Medicaid expansion, and so trying to pull it back is really not going to work.”

Boehner said the Republicans’ best hope in the coming months is to peel away aspects of the law, such as some tax provisions and regulations, and to end health insurance mandates.

Boehner’s remarks diverge from the positions of President Donald Trump and congressional Republican leaders, who are still pushing for legislation to dismantle the Affordable Care Act and scale back Medicaid. Senate Majority Leader Mitch McConnell, R-Ky., is planning to hold a vote on beginning debate on GOP health-care legislation as soon as Tuesday.

Boehner’s statements were made July 21 at ThoughtSpot, a trade show hosted by Good Neighbor Pharmacy at Mandalay Bay Resort and Casino in Las Vegas. Videos of his appearance were obtained by The Post from a person who requested anonymity to share the clips.

A Boehner spokesman did not respond to a request for comment.

As Boehner sat on the dais in an expansive ballroom, he also shared frank observations about the president and his party. The former Ohio lawmaker’s outlook echoed the frustrations of many Republicans on Capitol Hill, although those views are usually expressed in closed settings.

Boehner warned that the GOP’s infighting, despite having control of Congress and the White House, could have dire political consequences for the party. If Republicans fail to pass legislation on health care, taxes and infrastructure, “they’re going to get annihilated” in next year’s midterm elections, he said.

Boehner described Trump as a “friend of mine. We’ve played a lot of golf together over the years. He was a donor of mine.” But he said he never expected Trump to win the presidency and has been discouraged by how he has handled parts of the job.

“I never really saw him as president. You all know what I mean,” Boehner said as audience members chuckled.

Boehner urged him to “quit tweeting” and avoid spats with media personalities like the hosts of MSNBC.

“He keeps getting in his own way,” Boehner told the attendees.

“I mean, going after Mika Brzezinski or Joe Scarborough? What .… is the point?” he asked, referring to Trump’s social-media assault of Brzezinski last month.

Boehner said Trump’s seemingly nonstop battles with news organizations were unwise distractions for him and the party – and risky.

“You never get into a fight with people who buy ink by the barrel. He does it every day.” Boehner said.

“It may have worked during the campaign. But I think he would do himself well if he would just slow the tweeting down and just focus on what he’s doing and not being critical,” Boehner said.

Boehner went on to tell the group that cutting bipartisan deals in Washington is now all but impossible due to the way negotiations unfold in the media. Any interaction with a Democrat risks being covered by conservative outlets as a potential betrayal of the GOP, he said.

Boehner blamed figures on the right who purchase lists of conservative activists and then position themselves as leaders of a movement. He said talks between party leaders can be ruined by “one person who creates a committee to preserve the Constitution” and can “blast out information quickly.”

“You used to have a little breathing room – 24 hours, 48 hours before it actually got in the press. Well, that’s gone. Everything today is instant,” he said.

Boehner recalled that when he used to visit President Barack Obama, he would frequently “sneak into” the White House to avoid being seen by reporters.

Boehner pointed to the fragmentation of the national media as another reason for the paralysis and what he sees as alarming intensity and partisanship in politics.

“What’s making everything even worse today is because we have so much news, people get to choose where they get their news,” Boehner said. “It used to be we had three big TV networks, five big newspapers, and five big radio stations and whatever they said was the news. Everybody else followed what they do.”

“They go to places that they agree with, reinforcing the divide that we have in the country already,” he said.

“These radio talk show guys, they carry on, it’s just nonsense,” Boehner said. “Some of these people who run these big blogs, the kind of stuff they put out, I would also disagree with.”

Turning back to health care, Boehner acknowledged that his candor may not be appreciated by Republican leadership on Capitol Hill. The last time he made headlines, his successor, House Speaker Paul D. Ryan, R-Wis., sent him a dismayed text.

“Gee, thanks,” Boehner said, reciting what Ryan texted him.