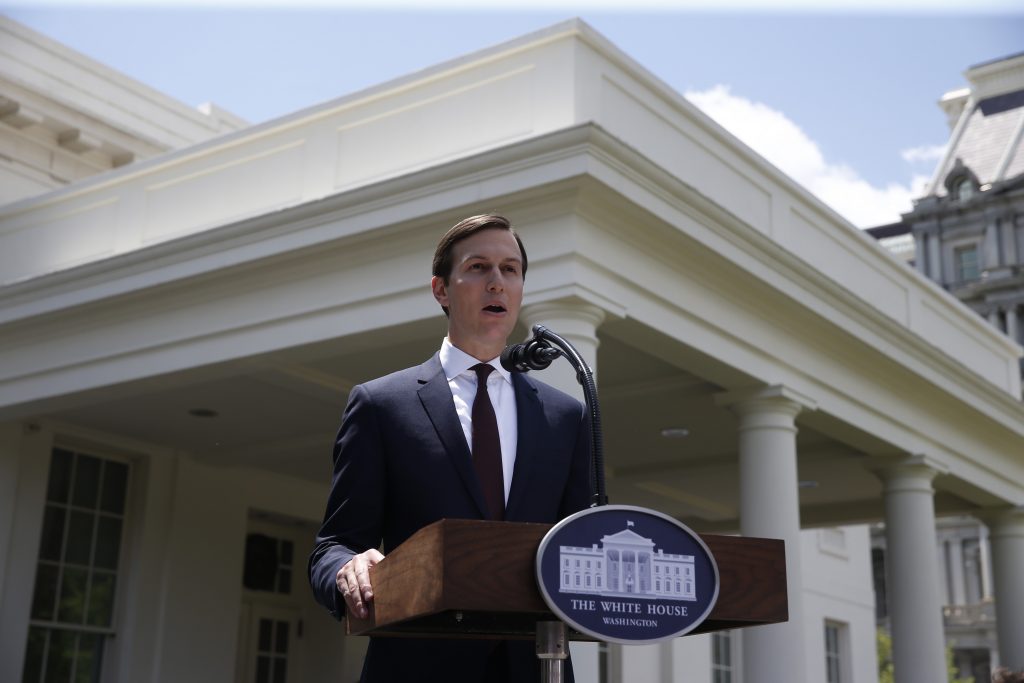 Jared Kushner, President Donald Trump’s son-in-law and a senior White House adviser, detailed four meetings he held last year with Russian officials in a statement on Monday in which he also said he “did not collude” with Moscow during the 2016 U.S. election campaign.

Kushner, who met behind closed doors with Senate Intelligence Committee staff, issued a written statement before that session that gave the fullest account to date of his contacts with Russian officials during the campaign and the presidential transition.

Kushner, like Trump a businessman, portrayed himself as someone who was new to politics when he became a top adviser to his father-in-law’s campaign and was often so frantic fielding phone calls and emails that his recollections of some meetings was somewhat hazy.

“I did not collude, nor know of anyone else in the campaign who colluded, with any foreign government,” he said. “I had no improper contacts. I have not relied on Russian funds to finance my business activities in the private sector.”

The Senate Intelligence Committee is one of several congressional panels investigating the Russia matter, along with a federal criminal probe led by special counsel Robert Mueller.

Speaking at the White House after the meeting, Kushner said: “The record and documents I have voluntarily provided will show that all of my actions were proper and occurred in the normal course of events of a very unique campaign.

“Let me be very clear: I did not collude with Russia, nor do I know of anyone else in the campaign who did so.

“I had no improper contacts. I have not relied on Russian funds for my businesses. And I have been fully transparent in providing all requested information.

Kushner said that Trump prevailed over his Democratic rival Hillary Clinton in November 2016 because he “had a better message and ran a smarter campaign.

“Suggesting otherwise ridicules those who voted for him.”

The Republican president, who has called the Russia probes politically motivated, lashed out at the investigations in Twitter messages on Monday. Trump has been dogged by allegations that his campaign aides worked with Russia, which U.S. intelligence agencies have accused of interfering in the election. Moscow has denied any meddling, and Trump says his campaign did not collude with Moscow.

Kushner arrived with prominent white-collar defense lawyer Abbe Lowell for the meeting with Senate staffers, which lasted about 2-1/2 hours.

In his written statement, Kushner said he first met Russian Ambassador Sergei Kislyak in Washington in April 2016 and shook hands. He said he did not recall phone calls with Kislyak between April and November 2016, as reported by Reuters in May, had found no evidence of the calls in phone records and was skeptical they took place.

Kushner said he met after the election, on Dec. 13, with Sergei Gorkov, the head of Russian state-owned Vnesheconombank, because of Kislyak’s insistence and because the Russian had a “direct relationship” with President Vladimir Putin.

Kushner said that “no specific policy issues” were discussed.

“He introduced himself and gave me two gifts: One was a piece of art from Nvgorod, the village where my grandparents were from in Belarus, and the other was a bag of dirt from that same village,” Kushner said.

He said he did not have any contact with Gorkov before the meeting, nor had he been in contact with him since.

Members of the House of Representatives and Senate intelligence committees have said they want to hear about a June 2016 meeting involving Russian lawyer Natalia Veselnitskaya and Trump’s eldest son, Donald Trump Jr.

The younger Trump has released emails that showed he welcomed the prospect of receiving damaging information from the Russian government about Clinton.

Kushner and former Trump campaign manager Paul Manafort were also at the meeting but Kushner described it as a waste of time.

“I actually emailed an assistant from the meeting after I had been there for ten or so minutes and wrote, ‘Can u pls call me on my cell? Need excuse to get out of meeting.'”

He said no part of the meeting he attended “included anything about the campaign” and he had no knowledge of any documents being offered or accepted. He said an email from Trump Jr. before the meeting was “on top of a long back and forth that I did not read at the time.”

Kushner was expected to face questions about reports he tried to set up a secret back channel to Moscow, as well as other contacts with top Russian officials and business leaders.

He said that in a Dec. 1 meeting with Kislyak, the Russian ambassador asked if there was a secure line in Trump’s transition office to facilitate a discussion with Russian generals about Syria, and Kushner replied there was not.

Kushner said he asked if the Russians had an existing communications channel at the Russian Embassy that could be used to transmit information to the transition team, but Kislyak indicated that was not possible and they agreed to follow up after the inauguration.

Kushner did not initially disclose any meetings with Russians on forms he filed to get a government security clearance. He has since revised those forms several times.

He said the forms were initially submitted prematurely in error and omitted all foreign contacts he had had, not just those with Russian officials.

Kushner is also scheduled to address the House intelligence panel on Tuesday.