The gala celebration brought the lomdei haDaf worldwide one step closer to the 13th Siyum HaShas, which will take place, iy”H, in January 2020.

In addition to the many who flocked to the Catskills for the siyum, the more than 100 members of Camp Agudah’s Masmidim program joined in the simchah as well. Their participation was a living testament to the vibrancy of the Agudah’s Torah Projects, which have touched the lives of hundreds of thousands over the years.

“This event was unique in the way it linked two of the crown jewels of Agudath Israel of America,” noted Rabbi Eliyahu Simcha Bamberger, national coordinator of the Daf Yomi commission. “The Daf Yomi program is one of the organization’s most important flagship programs; Camp Agudah’s Masmidim program, which was under the close guidance of Rav Yisroel Belsky, z”l, for decades, is yet another one of our precious jewels.”

Hundreds more joined the siyum through a worldwide livestream broadcast, giving those who could not attend in person an opportunity to bask in the combined glow of simchah and limud Torah that permeated the beis medrash.

Rabbi Elimelech Belsky, who continues his father’s legacy as head of Camp Agudah’s Masmidim program, made the siyum on Maseches Bava Basra. As he concluded the final words of the 23rd masechta of Shas, a tremendous feeling of joy and accomplishment flooded the room. Rabbi Shimon Newmark, director of the Agudah Camping Network, said the Hadran, which was followed by joyous singing. Then Rabbi Yisroel Reisman, the camp’s official Rav for the first half of the summer, began Maseches Sanhedrin.

Addressing the crowd, Rabbi Reisman acknowledged that undertaking the limud of Daf Yomi can seem like a daunting commitment; however, he said, its regimented nature makes learning an integral daily part of a person’s life. He spoke of the immeasurable rewards of the program, both in this world and in the World to Come.

Rabbi Eytan Feiner spoke passionately to a spellbound audience about the incredible joy that Daf Yomi brings. He discussed the many lessons that we can learn from Seder Nezikin, ideals so lofty and powerful that their implementation will undoubtedly hasten the ultimate salvation of Moshiach.

Rabbi Newmark noted that while Camp Agudah was honored to host the siyum, having it take place in the Catskills brought home an important aspect of the program. “Daf Yomi goes on all year around, even in the summer,” he said. “Even when people go away on vacation, Daf Yomi comes along with them. By making the siyum in Camp Agudah, we had a great opportunity to offer tremendous chizuk to both our present-day lomdei haDaf across the globe, and to those that will join their ranks in the future, making a lifelong commitment to limud haTorah b’kvius.” 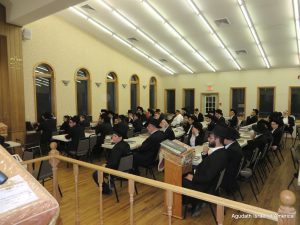