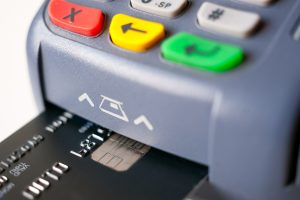 In most of the world, buying goods with a credit card equipped with a chip is a mindless, routine task. Americans, having arrived late to chips after decades of swiping magnetic stripe cards, are having a much harder time with it.

When you approach the checkout, there’s the constant question: swipe or insert? If a chip reader is working — and many still aren’t — you insert your card, and then … you wait, for an unpredictable amount of time, staring at a screen. Chances are good you’ll impatiently glance away just as the transaction finally goes through. Or you’ll miss the clunky graphics switching from “Do not remove your card” to “Remove your card.”

Finally, you may be told to remove your card with a nasty, insistent beeping that sounds like you’ve done something wrong.

It’s an awkward and irritating experience, and payment companies are aware of the problems. “Some places, it’s seamless and beautiful,” said Robert Martin, North American vice president of security solutions at Ingenico Group, the second-largest maker of payment terminals in the U.S. “Other places, not so much. But we’re learning.”

Unfortunately, there are no easy fixes. To connect to card networks, retailers use a countless array of software providers and payment processors. Payments can also be linked to more than a dozen other applications controlling store operations, from coupons to inventory. If not configured perfectly, this tangle of systems and vendors can slow chip transactions to a crawl.

“We don’t want you to wait for more than three seconds,” said Valli Lakshmanan, global head of experience design and marketing at Verifone, the U.S.’s largest maker of payment terminals. “But all of us have to come together to make that possible.”

So much complexity means that installing a chip system, or even adding a simple software upgrade-swapping out an audio prompt, for example, can take months. Verifone has come up with new sounds and visual options for its terminals, but Lakshmanan doesn’t expect consumers to begin to see them until the fall.

Minor software upgrades might not be enough to speed up transactions in a noticeable way. Visa and MasterCard have come up with faster systems for merchants, such as grocery stores and fast-food restaurants, who want their lines to move more quickly. Visa’s Quick Chip and Mastercard’s M/Chip Fast allow shoppers to insert and remove their chip cards quickly before a transaction is complete. Customers can do other things (such as bag their groceries) while the purchase is processed. The faster systems, unveiled in April 2016 by both companies, are still hard to find in the U.S. About 40,000 U.S. merchant locations were using Visa’s Quick Chip at the end of May. MasterCard declined to say how many retailers are using M/Chip Fast.

The fastest, most convenient option is contact-less payments, in which customers check out by waving a card or phone in front of a payment terminal. Unfortunately, widespread adoption of the technology would be another logistical challenge for an industry still adjusting to basic EMV chips.

Millions of retailers would need to buy special payment terminals, and more than 1 billion credit and debit cards would need to be upgraded. To speed the process along, consumers would need to show much more enthusiasm for mobile payments than they have so far. The percentage of Americans who have tried their phone’s payment apps — such as Apple Pay or Android Pay — has stalled, according to the latest PYMNTS.com survey.

Once again, the U.S. is way behind the rest of the world. In the U.K. and Canada, about 40 percent of Visa’s transactions are contact-less, the payment network says. In Australia, the number is 85 percent.