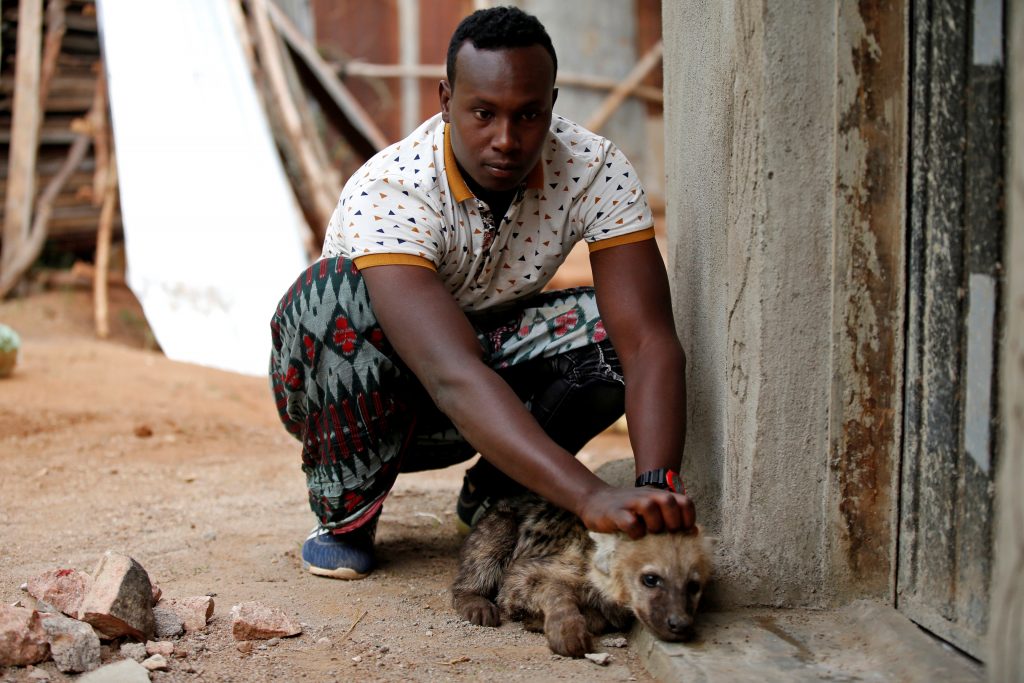 Hyenas roam the streets of the ancient walled city of Harar in eastern Ethiopia every night, seeking scraps of meat to drag to the nearby caves.

But residents are not afraid. A family chosen by the town to feed the animals is not daunted by the task despite the dangers that are associated with coming into close quarters with such wild animals.

Abbas Yusuf, known as Hyena Man, learned to feed the hyenas from his father, Yusuf Mume Salleh, who fed them for 45 years before passing the job to his son 13 years ago.

“Hyenas have never attacked the people of Harar after my father started feeding them, unless you harm their babies,” Abbas Yusuf told Reuters.

“My father is always thankful that I continued the good work he started and I will pass it on to my children when I grow old.”

His work is now an attraction, drawing in tourists who came to see the city’s ancient mosques nestled within its old stone walls.

“I am privileged by G-d to be a good friend to those misunderstood animals,” he said.

“I have a baby hyena in my house and keep it in my bedroom (and I’m) not worried it will bite me when I sleep.”

Abbas has given the hyenas names according to their behavior and appearance. Among them are “Dabbassoo” or “Hairy,” “Tuqan Dilii” or “Lazy,” and “Qallaa,” meaning “skinny.”

To encourage visitors to trust the hyenas, Abbas feeds them directly from his mouth.

The hyenas live in caves outside the city and roam the rubbish dumps, also outside the walls. Some hyenas give birth in the ditches in the middle of the city.

“The hyenas are a gift of nature to clean up the city we mess during the daytime. Without them, the city would be much dirtier,” Anisa Mohammed, a 32-year old bread vendor, said.

Harar, with a population of 240,000 people, started to expand out of its original wall after 1882 and is now surrounded by modern buildings.

It has been a center of Islamic culture since it was founded in the 7th century. In the 16th century, Emir Nur ibn Mujahid built a four-meter-high protective wall around the city, pierced by five gates.

Every year since the 16th century, the city’s residents offer the hyenas porridge mixed with butter and goat meat on the “Hakim Mountain,” outside the city, believed to be a holy site because the ancient Muslim leaders of the city are buried there.

If the hyenas refuse the sacrifice, people believe the country will have bad luck.