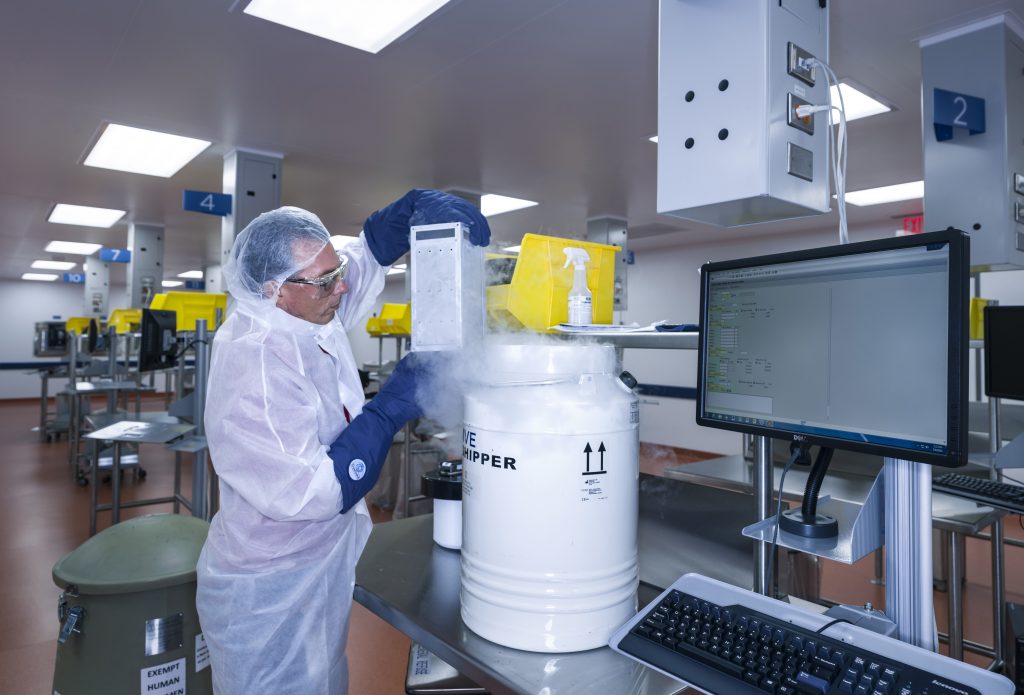 A panel of cancer experts Wednesday recommended approval of what could become the first gene therapy available in the U.S.

The Food and Drug Administration advisory panel voted 10-0 in favor of an advanced leukemia treatment developed by the University of Pennsylvania and Novartis Corp. The FDA usually follows recommendations of its expert panels, but isn’t obligated to do so.

The therapy could be the first of a wave of treatments custom-made to target a patient’s cancer. Called CAR-T, it involves removing immune cells from a patients’ blood, reprogramming them to create an army of cells that can zero in on and destroy cancer cells, and injecting them back into the patient.

“This is a major advance,” said panel member Dr. Malcolm A. Smith of the National Cancer Institute. He said the treatment is “ushering in a new era.”

The vote came after lengthy discussion and impassioned pleas from the fathers of two young patients whose lives were saved by the therapy. The one-time leukemia treatment would be for children and young adults with the most common form of childhood cancer, known as ALL.

“Our daughter was going to die and now she leads a normal life,” said Tom Whitehead, of Philipsburg, Pennsylvania. His daughter Emily, now 12, was the first child to receive the experimental therapy, five years ago. “We believe when this treatment is approved, it will save thousands of children’s lives around the world.”

After decades of setbacks and disappointments in efforts to fix, replace, or change genes to cure diseases, several companies are near the finish line in a race to bring CAR-T and other types of gene therapy to patients. Kite Pharma also has a CAR-T therapy in FDA review and Juno Therapeutics and others are in late stages of testing.

Novartis is seeking approval to use the treatment for patients aged 3 to 25 with a blood cancer called acute lymphoblastic leukemia whose disease has spread or failed to respond to standard treatment. That happens to more than 600 patients in the U.S. each year. At that point, they have limited options — all more toxic than the CAR-T therapy — and survival chances are slim. ALL accounts for a quarter of all cancers in children under age 15.

In a key test, results were far better than chemotherapy and even newer types of cancer drugs. Of the 52 patients whose results were analyzed, 83 percent had complete remission, meaning their cancer vanished. Most patients suffered serious side effects but nearly all recovered.

CAR-T therapy starts with filtering key immune cells called T cells from a patient’s blood. In a lab, a gene is then inserted into the T cells that prompts them to grow a receptor that targets a special marker found on some blood cancers. Millions of copies of the new T cells are grown in the lab and then injected into the patient’s bloodstream where they can seek out and destroy cancer cells. Doctors call it a “living drug” — permanently altered cells that continue to multiply in the body into an army to fight the disease.

During the patient testing, the whole process took about 16 weeks, which can be too long a wait for some desperately ill patients, the FDA advisers noted during the meeting in Silver Spring, Maryland. Drug company officials said they can now produce a treatment and get it to a patient in about three weeks.

Novartis said in a statement that it has long believed CAR-T therapy could “change the cancer treatment paradigm.”

The cost of CAR-T therapy is likely to be hundreds of thousands of dollars, but it’s only given once. Typically, cancer patients take one or more drugs until they stop working, then switch to other drugs, so treatment — and side effects — can go on for years.

The treatment’s short-term side effects, including fever and hallucinations, are often intense as the body’s revved up immune system goes on the attack. The long-term side effects of the treatment are unknown. It’s also unclear if patients whose cancer goes into remission will be cured or will have their cancer return eventually. The FDA panel recommended that patients who get the treatment be monitored for 15 years.

Other biotech and pharmaceutical companies are developing types of gene therapy to treat solid cancers and rare gene-linked diseases. A few products have been approved elsewhere — one for head and neck cancer in China in 2004 and two in Europe, most recently GlaxoSmithKline’s Strimvelis. That was approved last year for a deadly condition called severe combined immunodeficiency and launched with a $670,000 price tag.

UniQure’s Glybera was approved for a rare enzyme disorder. It was used only once in five years, likely due to its $1 million-plus price tag, so uniQure is pulling it from the market.