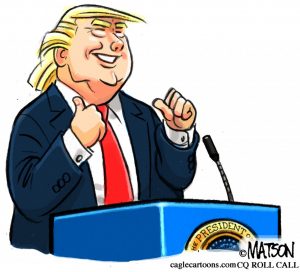 Did President Trump “collude” with the Russians to steal the election from its rightful winner, Hillary Clinton? Is a megalomaniac egotist one tweet away from igniting World War III? Is the president a diplomatic klutz with sophomoric language skills and a spellcheck away from covfefe? (Does spellcheck even help in such cases?)

Being as it is that the mainstream media has already devoted bounteous coverage to these topics, let’s talk about something else this week.

When discussing President Trump, even with members of the community, there’s a certain sense of elitism which runs through the undercurrent. Even a word of praise is accompanied by a whiff and a snort — “But Trump is unpredictable.”

Let’s put this in context.

The man who tops every single list of greatest presidents, Abraham Lincoln, had a voice that, in the words of a contemporary, was “shrill, squeaking, piping, unpleasant.” The wisest and most prolific president, Thomas Jefferson, had a speech impediment. The president first in the hearts of his countrymen, George Washington, who could tell a lie, had false teeth made out of ivory which shook when he spoke.

Suddenly, the media found its voice. They’re ready to speak truth to power. Why? Because their preferred policies are threatened.

Our community’s priorities do not align with that of Mr. Trump’s opposition. We have a vested interest in the president’s success and victories. Say what you want about the person, it’s the policies that have always counted among Gedolim through the millennia. It is clear that our community must actively support him.

Under Trump, ridiculous regulations are melting like global warming. Business is booming, hiring is up, stocks and bonds are being traded like tickets to Trump’s inauguration.

Here’s my theory about the Qatar crisis. Trump wants a peace deal between Israel and the Palestinians, but knows the way to get there is by carefully studying Obama’s methods, and then doing the exact opposite. Obama pressured Israel since, to that global citizen, Israel is the bad guy, and bad guys are allowed to bleed a little. Trump looks at the world from an American perspective, and realizes that hey, the U.S. and Israel are really good friends and agree on a whole lot more things than they disagree. So he is looking at the region with an eye on a deal, not on rectifying “injustice,” as Obama wanted.

And getting a peace treaty signed right away confronts the greatest roadblock — Hamas. Aside from the fact that their terrorism makes it hard for Israel to want to talk at all, there’s also the niggling fact that they run Gaza. If Abbas signs on the dotted line, will Gaza be included? Probably — obviously — not.

The solution, in Trump’s eyes, is to cut off the pipeline feeding Hamas. That’s why a group of Arab governments cut off ties with Qatar, Hamas’s biggest financial backer, days after Trump swept through the region. A wink and a nod was all it took.

All this gives Trump the opportunity to play the good cop, urging the Gulf states to play bad cop, issuing a list of demands and attempting to broker a truce.

Will it all lead to peace in the Holy Land? Impossible to know. But Trump has the right keys in his hand. And most importantly, he’s in collusion with reality.