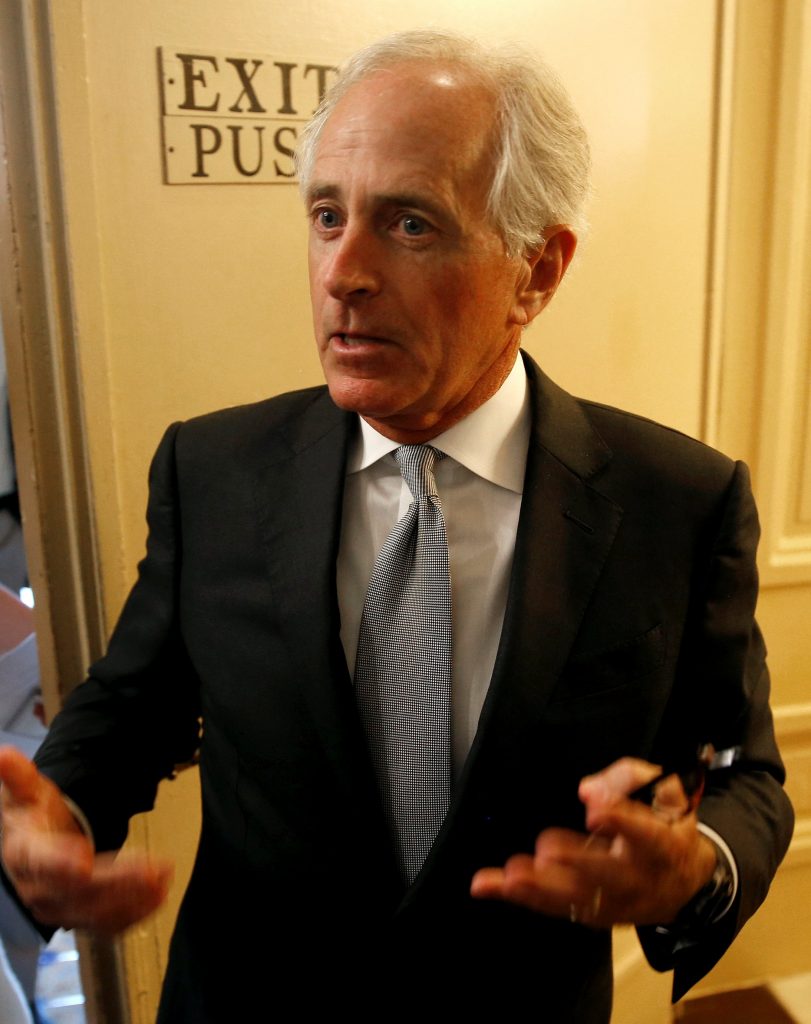 The Senate on Thursday agreed to a fix a popular measure that would slap economic sanctions on Russia and Iran, clearing the way for action in the House. It was unclear whether any vote would occur before President Donald Trump’s meeting next week with Russian President Vladimir Putin.

Sen. Bob Corker of Tennessee, the Republican chairman of the Foreign Relations Committee, said Thursday afternoon the necessary repairs have been made and the next move is the House’s to make.

“We’ve done what we need to do,” Corker said. “The ball’s in their court.”

The technical changes that had stalled the bill in the House came as Republicans dismissed Democratic complaints that delay was at the behest of the Trump administration and efforts to weaken the legislation. Tempers flared among lawmakers over the lull, with each side blaming the other as lawmakers were poised to leave Washington for their week-long July 4th recess.

The legislation cleared the Senate two weeks ago with 98 votes, an overwhelming margin that suggested the bill would speed quickly through the House and to Trump’s desk. But the measure hit headwinds almost immediately. House Republican leaders said the bill ran afoul of a constitutional requirement that legislation involving revenue start in the House.

Envoys from both chambers huddled behind closed doors to resolve the dispute as the recess loomed. The problems were technical not substantive, lawmakers insisted, yet Democrats accused Republicans of slow-walking the bill.

Speaking to reporters early Thursday, House Speaker Paul Ryan (R-Wis.) insisted the House was “protecting the Constitution,” not working behind the scenes on behalf of the White House.

“They wrote the bill incorrectly so we have told the Senate you’ve got to write it correctly to follow the Constitution,” Ryan said.

The sanctions targeting Russia seek to punish Moscow for meddling in the 2016 election and for its aggressive actions in Ukraine and Syria.

“I want to put the House on notice,” said Senate Minority Leader Chuck Schumer (D-N.Y.). “If they water down the bill, weaken the sanctions, add loopholes to the legislation, they will find stiff resistance here in the Senate.”

Schumer and House Minority Leader Nancy Pelosi called for House Republican leaders to pass the bill immediately, before Trump and Putin meet at an international summit in Germany next week.

But Corker denounced the stance the Democrats had taken as “silly” and “ridiculous.” He said they were attempting to dictate how the House should act before the Senate made the required technical repairs to the sanctions bill.

The changes to the legislation “should have been agreed to in about an hour,” Corker said, adding that he hoped the delay “doesn’t create mischief.” Congress doesn’t return from the recess until the week of July 10. He declined to be specific, suggesting that there are “certainly pro-Russia folks” and businesses that are opposed to stiffer sanctions and may use the intervening period to push for changes.

“I’m talking to Europeans on the phone,” Corker said.

The energy-specific sanctions against Russia generated sharp criticism from Germany and Austria, which said the penalties could affect European businesses involved in piping in Russian natural gas.

In a joint statement, Austria’s Chancellor Christian Kern and Germany’s Foreign Minister Sigmar Gabriel cited a section of the sanctions bill that calls for the United States to continue to oppose the Nord Stream 2 pipeline that would pump Russian gas to Germany beneath the Baltic Sea.

In addition to hitting Russia and Iran with additional financial penalties, the bill would strengthen Congress’ authority over Russia sanctions policy. The bill would require a 30-day congressional review period if Mr. Trump attempts to ease or end penalties against Moscow.

The Senate bill imposes mandatory sanctions on people involved in Iran’s ballistic missile program and anyone who does business with them. The measure would apply terrorism sanctions to the country’s Revolutionary Guards and enforce an arms embargo.

Pelosi echoed Schumer’s concerns about substantive changes to the bill.

“I always say what is it that the Russians have on Donald Trump,” Pelosi said, “that we have to pussy-foot around when it comes to sanctions on Russia.”