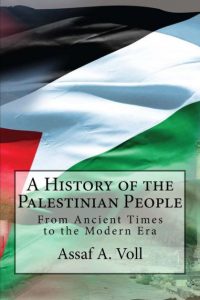 In response to numerous complaints from customers, the online store Amazon removed a new book, “A History of the Palestinian People: From Ancient Times to the Modern Era,” from the site. Customers were irate when they discovered that the book was completely blank.

The Israeli “author,” Assaf A. Voll, told the pro-Israel group United with Israel that he had “no intention of deceiving anyone.”

He pointed out that prospective buyers could use a preview button that revealed that the book was devoid of actual content. “There are other empty books on Amazon,” he said. “One of which was even a bestseller titled ‘Reasons to Vote for Democrats: A Comprehensive Guide.’”

Voll acknowledged that he also got flack from an angry public. “I received emails and Twitter messages with curses and accusations, but no threats,” he said.

Until complaints forced Amazon to remove it, the book had been doing very well. It had the second spot in the site’s category of ‘Israel and Palestine History’ and was No. 1 in ‘Middle East History’ section.

IDF Soldier Sentenced to 10 Days in Jail for Political Remark