The Lesson of the Honeybee 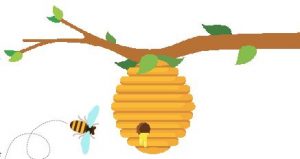 “You know, there seem to be fewer bees around,” an acquaintance commented to me recently, considerable gratitude in his voice. “Years ago, when we sat outside in the summer they frequently paid us an unwanted visit. Now we see them only rarely.”

It turns out that he is right about his facts.

According to statistics by the United States Department of Agriculture (USDA), there were about 6 million honey bee hives in the United States in the 1940s. Today there are only about 2.5 million. Each winter since 2006, about 30 percent of beehives collapsed because of disease, parasites, poor nutrition, pesticide exposure and other issues.

Those of us who have suffered the pain of a bee sting or were forced to contend with the fear young children (and sometimes relatively mature adults) experience when they come in contact with a buzzing bee, may be able to fully relate to my acquaintance’s gratitude. But, in reality, that approach is seriously mistaken.

According to the USDA, three-fourths of the world’s flowering plants and about 35 percent of the world’s food crops depend on what they refer to as “animal pollinators” to reproduce. Some scientists estimate that one out of every three bites of food we eat exists because of pollinators such as bees, butterflies and moths, birds and bats, and beetles and other insects. In the United States alone, there are more than 3,500 species of native bees — and they pollinate some $15 billion worth of crops, including more than 130 different types of fruits and vegetables.

Popular foods like almonds, apples, blueberries, melons, and squash are heavily dependent on insect pollination. California almond groves, for instance, require about two hives (each with tens of thousands of bees) per acre. So in order to make it possible for someone to purchases a bag of almonds in a New York grocery, owners of California groves growing this highly nutritional nut have to make certain they have enough bee hives to go around. It is estimated that the California almond industry spends about $320 million on pollination expenses alone!

Not only does the decline in the bee population lead to a significant increase in the price of many crops; it has an adverse effect on their taste, texture and visual appeal as well.

That, to this writer, is a most powerful and striking lesson. Here we are, in 2017, when so much of our lives is dominated by dramatic technological advances, and yet a multi-billion-dollar crop industry is primarily dependent on an irreplaceable small creature known as the honeybee.

In some areas of China, faced with a shortage of honeybees, produce growers engage in “hand-pollination” — which means that workers literally go from plant to plant, often using a cotton swab, and seek to pollinate plants and tree blossoms. Not only is this tedious and extremely time consuming, but it turns out bees do a better job: Hand-pollinated fruits are smaller than those pollinated by bees.

In His infinite wisdom, the Ribbono shel Olam created a perfect world, and nothing invented by man has thus far been able to compete with the honeybee.

In the late 1950s and early 1960s, many pediatricians urged new mothers not to nurse their infants, a practice they considered primitive, but rather to feed them baby formula. My grandfather, the Kopyczynitzer Rebbe, zy”a, strongly dismissed the doctors’ claims.

“Even a little of the mother’s milk is better than a whole bottle of the doctor’s [formula],” he insisted. It took the medical establishment a few years to catch on, but eventually they came around to recognizing that mother’s milk has enormous health benefits that simply cannot be duplicated by any man-made formula. Nowadays, hospitals go to great lengths to encourage mothers to nurse their babies immediately after birth.

Similarly, the most advanced machinery doesn’t come close to the organs Hashem created, such as the heart, lungs, kidneys, eyes and ears.

This reality is a most humbling one. It is also an illuminating lesson that all of us would do well to apply to our everyday lives.

It is often tempting to let ourselves be guided by technology instead of logic. Indeed, there are trips when using a GPS can be very valuable. But when we stop using our brains at all, are hopelessly addicted to handheld devices, and rely only on Waze and Google for guidance and information, we are not only wasting our most precious resources but actually settling for a substandard life.

Some inventions, such as indoor plumbing and running water, have made our lives more comfortable and healthier. Other inventions, including most of modern technology, may have superficially made our lives easier, but in reality have added enormous amounts of stress to our existence.

Whether it is in regard to using a handheld device, a desktop computer, or something built into a car, let us bear in mind the lesson of the honeybee. The Ribbono shel Olam made a perfect world, and no modern invention can compete with the advantages of the human mind. At all times, pure human logic — guided by crystal-clear Torah hashkafah — must reign supreme and decide when, what, where, which and how technology ought to be used.