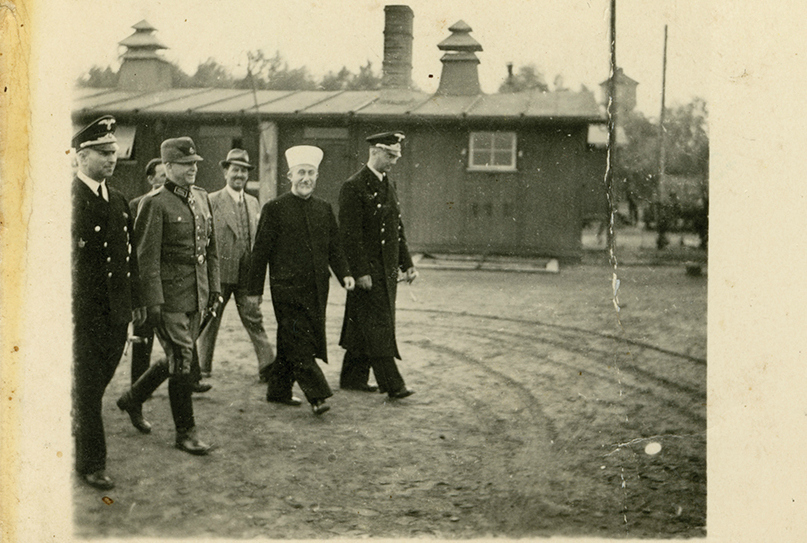 Previously unknown photographs of the Mutfi of Yerushalayim Hag Amin al-Husseini on a visit to a Nazi camp during World War II are set to go on auction on Tuesday.

The pictures, which provide further evidence of the Mufti’s ties to the Third Reich, will be put up for bidding by Kedem Auction in Yerushalayim on Tuesday. They show the Mufti accompanied by high-ranking Nazi officials, and in some, prisoners of the unidentified camp can be seen lining up in formation for the “honored” guest.

The photographs were acquired by the auction firm from a private dealer. The back of each one is stamped with the words “Photo-Gerhards Trebbin,” indicating that they were developed (and possibly taken) in the area of Trebbin, Germany. During the war, Trebbin was the location of a German labor camp and a subcamp of the Sachsenhausen Concentration Camp. An expert who examined the photographs said that the inmates were likely foreigners who had been brought to a forced-labor camp.

The auction comes after the revelation last March by researchers at the National Library in Yerushalayim of a telegram that was written by SS commander Heinrich Himmler and sent to al-Husseini around 1943.

In it, Himmler informed the mufti that Berlin was monitoring the Palestinian resistance against the Balfour Declaration and promised that Germany would stand alongside the Arabs of Palestine in their fight against the “criminal” document.