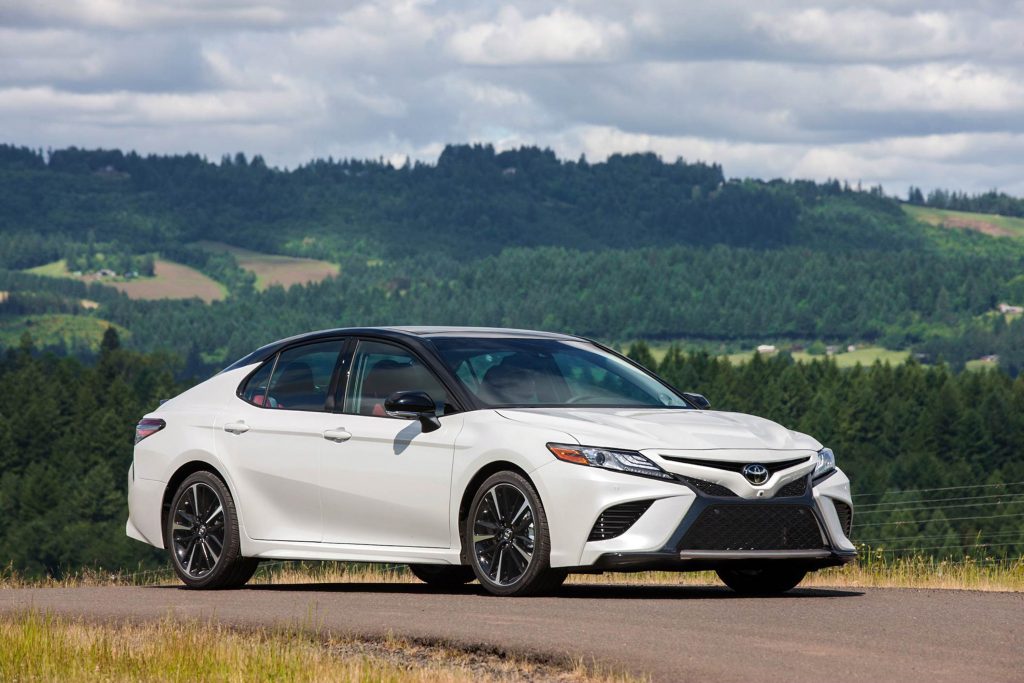 Sometimes a car’s name is appropriate.

Consider the Toyota Camry, whose moniker is derived from the Japanese word for crown, kanmuri. This makes sense given the Camry has worn the U.S. sales crown as the No. 1 selling passenger car for 19 of the past 20 years.

Yet midsize car sales are declining, with 63 percent of U.S. auto buyers opting for trucks, SUVs, and crossovers. While the midsize segment is still large, it increasingly rewards daring design. Just ask Kia. As of June 1, the Optima has seen the smallest sales decline of any midsize sedan in 2017.

Enter the redesigned 2018 Toyota Camry, which aims to banish the model’s bland reputation.

For buyers accustomed to more sedate styling, this car’s caffeinated, athletic appearance is sure to be polarizing. It’s 2 inches longer and less than 1 inch wider than the Camry it replaces, and passengers sit about 1 inch lower than last year — something that won’t go unnoticed by those used to an SUV’s higher ride height.

It will be offered in five grades: a new base-level L trim, followed by the LE and XLE, identifiable by their sedate horizontal front fascia. The more athletic SE and XSE models sport a black-painted roof, rear spoiler and side mirrors; an aggressive black mesh grille, and oddly placed, non-functional vertical vents below the taillights. The car’s polarizing wardrobe cloaks an impressive new platform equipped with front MacPherson struts and a new double wishbone rear suspension that results in admirable poise while carving corners.

Power comes from an all-new 2.5-liter four-cylinder engine generating 206 horsepower and 186 pound-feet of torque paired to an all-new eight-speed automatic transmission. A revised 3.5-liter V-6, with 301 horsepower and 267 pound-feet of torque, is also offered and is matched to the same transmission. Finally, the Camry Hybrid uses the 2.5-liter four and electric motors matched to a continuously variable automatic transmission. All Camrys have front-wheel drive; all-wheel drive is not offered.

Despite the updated engines, there’s remarkably little change in performance.

The V-6 is powerful enough to chirp the front tires, while the four provides sufficient power if drivers keep their feet buried in the throttle. If you prefer four cylinders to six, try the Hybrid. It boasts strong off-the-line acceleration and better fuel economy: 52 mpg combined on the LE Hybrid with its lithium ion batteries, 46 mpg on the SE and XLE Hybrids with nickel-metal hydride batteries. Most buyers will opt for the four-cylinder Camry, which returns 34 mpg combined; the V-6 returns 26 mpg.

Regardless of model, the Camry’s beautifully designed interior is exceptional for a car of this class, with a roomy cabin, generous legroom and firm seats that prove surprisingly comfortable.

The artfully sculpted instrument panel houses Toyota’s Entune 3.0 infotainment system, with an improved user interface, but without Apple Car Play or Android Auto. Navigation is courtesy of the Scout app, which must be linked from your smartphone through Bluetooth. An embedded navigation system is offered on top-end models. Curiously, the hedonistic features found in some competitors — including memory seats, heated steering wheel, rear seat heaters or seat ventilation — aren’t available.

Toyota’s Safety Sense suite, however, is standard — and it’s fairly complete, although you must get a higher trim level to get a blind spot monitor and rear cross traffic alert. A head-up display is a new feature.

Since replacing the Corona with the Camry in 1983, Toyota has sold more than 18 million worldwide, most sporting a conservative persona. While there’s little doubt that the 2018 Toyota Camry and its youthful aura is vastly better than the model it replaces, it remains to be seen if Toyota has gone a step too far with its styling.

My guess is they haven’t.