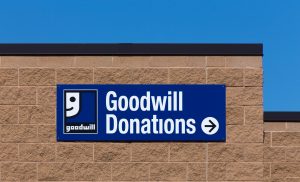 A couple has gotten back nearly $100,000 they mistakenly donated to Goodwill Industries in Ohio.

The (Zanesville) Times Recorder reports two Goodwill employees in Zanesville initially thought it was play money or counterfeit cash after finding $97,000 in hundred dollar bills in a duffel bag inside a box of clothes last week.

The duffel bag also contained legal documents and the last will and testament for Dan and Lynette Leckrone of Lewisville, about 115 miles (185 kilometers) west of Columbus.

After numerous messages from Goodwill went unreturned, the couple finally retrieved the money from the Zanesville Police Department, where Goodwill had taken it for safekeeping.

Dan Leckrone says he withdrew the cash the couple had saved for a new home to deposit in another bank.