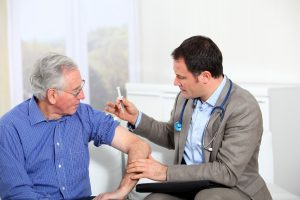 The flu vaccine did a poor job protecting older Americans against the illness last winter, even though the vaccine was well-matched to the flu bugs going around.

The vaccine was about 42 percent effective in preventing illness severe enough to send a patient to the doctor’s office. But it was essentially ineffective protecting some age groups. That includes people 65 and older — the group that’s hardest hit by flu, suffering the most deaths and hospitalizations.

The flu season that just ended was a long one that peaked in February and was considered moderately severe. But the flu-related hospitalization rate for older adults was the highest it’s been since the severe 2014-2015 flu season.

Results were presented at a meeting in Atlanta of the Advisory Committee on Immunization Practices, which provides vaccine advice to the CDC.

Experts are also looking at whether certain brands of vaccine offer more protection than others. About 40 percent of older Americans get a higher-dose flu vaccine that is supposed to work better.

Flu shots are recommended for virtually all Americans age 6 months or older.

Among infectious diseases, flu is considered one of the U.S.’s leading killers. CDC estimates there are tens of thousands of deaths each year from flu and pneumonia.