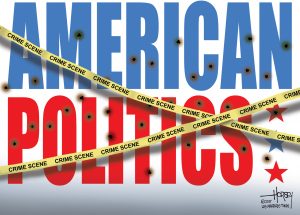 Last week’s brutal shooting attack that left Louisiana Congressman Steve Scalise, the No. 3 House Republican, fighting for his life, and injured four others, didn’t happen in a vacuum.

This was not yet another example of a “random shooting,” a plague that has left a trail of innocent victims across this country. Rather, the shooting that took place Wednesday morning at a popular park and baseball complex in Alexandria, Virginia, is a symptom of a different type of plague, one born of hatred and incitement.

Ironically, the group of Republican lawmakers and some others had gathered to practice for the upcoming congressional baseball match, an annual event that gives Republicans and Democrats an opportunity to put aside the rancor of politics and play ball with each other. Yet when James T. Hodgkinson approached South Carolina Rep. Jeff Duncan, as he was preparing to leave the baseball field, he had a single, polite question: Was a Democratic or Republican team playing?

While the shooter had some past run-ins with the law, he had never been convicted of a felony, and was able to legally purchase the deadly weapon. He had previously made his political and personal views known on social media as well as to a local mechanic who had serviced his car only a day before. A fan of Vermont Sen. Bernie Sanders, Hodgkinson reportedly volunteered for Sanders’s spirited but ultimately unsuccessful bid for the Democratic presidential nomination. He also harbors diabolical hatred against the lawfully elected leader of the United States, President Donald Trump.

“It was more than the average person who had maybe voted for Hillary. This was different. It was deeply rooted to where his whole tone and composure changed. His voice got loud and deep. There was so much anger in it,” the mechanic, Crist Dauberman, later recalled.

The liberal left was dealt a bitter blow by the unexpected victory of President Trump this past November, and feelings of deep disappointment and dejection are fully understandable. It is perfectly legitimate for a losing side to express anguish, as well as arguments as to why they strongly disagree with the winning party’s policies. Indeed, some individuals and political groups have chosen to fight the president’s decisions in court, and at least in regard to the travel ban, have thus far shown remarkable success in doing so.

But when the professed outrage crosses the divide from political protest into downright incitement to violence, a thick red line has been crossed. When the actor in a well attended Shakespeare play in New York playing the part of Julius Caesar — a Roman emperor who just happens to be assassinated during the production — dresses up to look just like Donald Trump, and a comedian poses for a photo holding a mock decapitated head that resembles the president, we know this line has been crossed by a wide distance.

After continuously complaining about some of the election rhetoric emanating from the Trump campaign, it is high time for those on the left to look into the mirror and take responsibility for their own actions and words instead of pointing fingers at others.

While a free and open exchange of views and opinions is crucial in a democracy, personal insults, derogatory comments, and dramatic, hateful exaggerations, which can all too easily lead to violence, should have no place in political discourse.

“The center of America is disappearing, and the violence is incited by the leading cultural voices of the left,” is how GOP Rep. Steve King of Iowa put it after the attack, a thought shared by many others.

While lowering the angry rhetoric is a vital part of what should be the reaction to this tragic attack, the response should also include rethinking the culture of violence that is part and parcel of modern American society. Thanks to an entertainment industry and mainstream media that is obsessed by violence, the average American — from infancy through old age — is constantly bombarded by images and vivid descriptions of acts of brutality and bloodshed.

Invariably, viewers are affected by what they have absorbed, and with the rapid advancements of a digital age, the problem is only getting worse and more dangerous.

We wish Congressman Scalise and the other victims of this attack a full and rapid recovery, and urge that this latest tragic attack usher in an era of soul-searching and introspection.