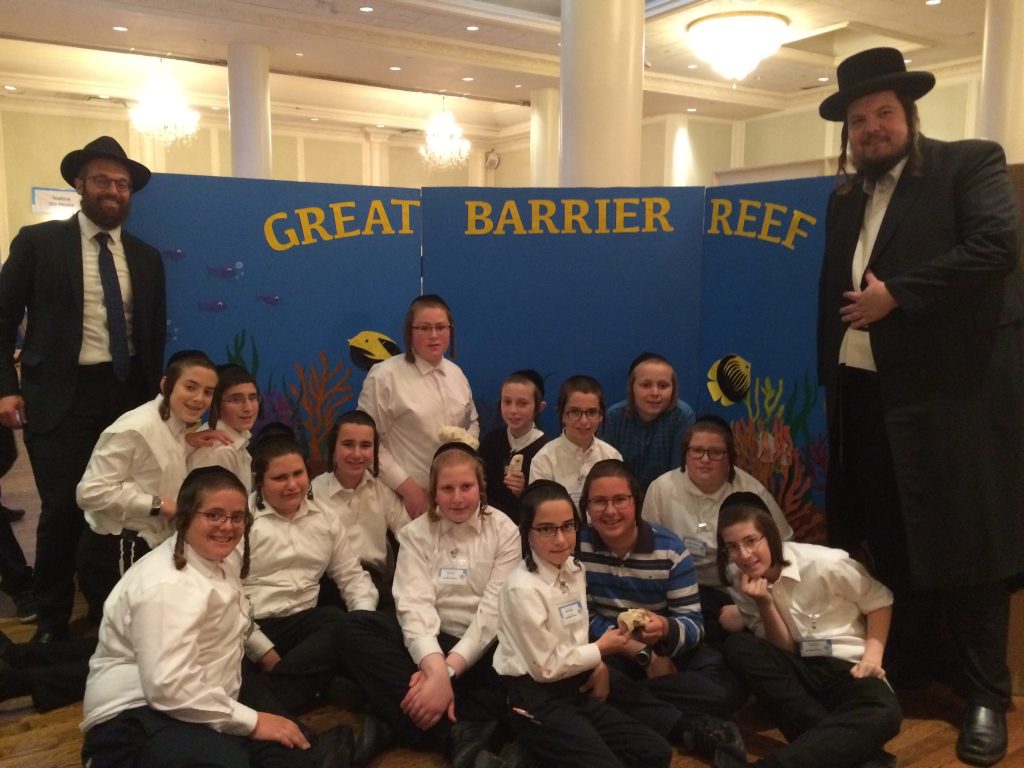 Over 100 students representing 10 New York-area chadarim gathered with their teachers and principals to display a wide array of projects on subjects ranging from innovative business ideas to natural disasters at the second annual Yeshiva Education Expo, held Sunday at Torah V’yirah Hall in Boro Park.

The expo, an event designed to showcase innovative approaches to teaching general studies in Torah Mosdos, was organized by the Yeshiva Principals Association. Several Rabbanim and local elected officials participated as well.

“We are trying to invigorate and bring a new excitement for secular studies within the framework of daas Torah and what is appropriate for our yeshivos,” Rabbi Avi Greenstein, principal of Imrei Yosef Spinka and executive director of the Yeshiva Principals Association, told Hamodia. “Principals and teachers would love to have new and fun ways to teach their subjects, and a forum like this helps everybody see that there are interesting and kosher ways to do just that.”

The expo was a culmination of smaller fairs held in each of the participating chadarim, which focused on a single subject. Several choice projects from each school were then picked to participate in the event.

“It’s a real hurricane,” said Nissan, a sixth grader from Yeshivas Karlin Stolin, proudly pointing to a diorama showing a field of overturned cars and uprooted trees. The young man went on to explain how the collision of hot and cold winds lead to the destructive storms that his project illustrated.

His classmate, Chaim, displayed the effects of a drought by showing two models of a pond, one filled with water and the other empty.

“If everything dries up, plants and animals can die, and it can even cause wildfires,” he said, showing a picture of a wild blaze on a poster board behind the 3-D presentation.

Just around the corner, a group of boys from Imrei Yosef Spinka showed off a large display about the history of Communism, focusing more on the effects than on the movement’s ideological underpinnings.

“These soldiers are the Viet Cong, and this a boat full of refugees,” said one student, pointing to the section depicting a scene from the Vietnam War that utilized dozens of plastic toy soldiers. Other sections of the model showed the disparity between the comforts in which Soviet leaders lived compared to the deprivation of the populace they ruled, and a protest being forcibly put down by tanks and soldiers. Another section of the project showed a home with hidden Shabbos candles and sefarim, depicting efforts to repress Yiddishkeit in Communist Russia.

After visitors and participants had time to circulate and view the many projects on display, the crowd was addressed by several speakers who discussed the importance of the event.

Harav Yechiel Michel Steinmetz, Skverer Dayan of Boro Park, delivered remarks stressing the importance of a strong secular studies curriculum for training the next generation to be able to earn a living and be responsible citizens of what he referred to as the “malchus shel chessed.”

He quoted many statements of Chazal about the obligation of parents to see that their sons are trained in a trade with which they can sufficiently support themselves and their families, and of the precedence of derech eretz to Torah. Rav Steinmetz concluded with a story about a man who came to the Belzer Rebbe, Harav Aharon Rokeach, zy”a, saying that he had just taken a job as a driver and asked for a segulah for safety in his work. To this the tzaddik responded simply, “The greatest segulah for shemirah is to follow all of the laws of the land while you are on the road.”

“In everything that a Jew does, he has to be taught a way not just to do it, but to do it according what the Torah requires of him,” he said.

In an endnote, one student from each of the participating chadarim spoke about the projects on display and other innovative programs in their schools, and expressed appreciation to their parents, Rebbeim and teachers.

Shlomo, a student from Yeshivas Mevakshei Hashem, said that his school’s writing project had students sharpen their skills by drafting and perfecting their own actual fundraising letters. The program not only improved their abilities, but raised $6,000 for a local tzedakah organization.

The Association of Yeshiva Principals was formed last year in an effort to encourage greater coordination and maximization of resources in yeshivos’ general studies programs, as well as to facilitate greater networking among administrators and teachers from different schools in the state. Last year’s expo was its first public event.

“If a picture is worth 1,000 words, this event goes a long way in showing the value that our yeshivos place on secular education,” said Rabbi Greenstein. “Everything constantly needs new ways to improve, and our general studies programs are no exception. This is one of the ways that we can help meet that goal.”