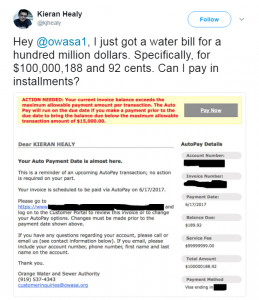 The water bill wasn’t so bad, but the service charge was eye-popping.

The News & Observer of Raleigh reports that Kieran Healy of Orange County in central North Carolina got a water bill for $189.92. The service charge was a dollar shy of $100 million.

Healy said he asked Orange Water and Sewer Authority on Twitter on Wednesday if he could make installment payments.

Healy posted later Wednesday that the utility assured him that his bill was wrong.

The utility’s Stephen Winters said an outside company sends payment reminder emails to customers before their account is drafted. Winters said a mistake made it appear Healy faced a huge bill.

Winters said he doesn’t know how many customers may get emails with incorrect service charges, but the company is sending out apology messages.