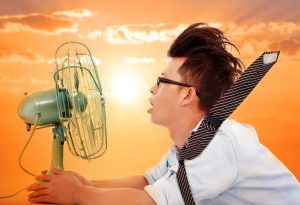 The heat wave that’s gripped the East Coast over the past few days is also making it harder to breathe.

The culprit is a dangerous mix of diesel exhaust, paint fumes and trees, baked by the heat to create a blanket of ozone. Children, the elderly, and people with heart conditions or asthma are most at risk. That’s spurred public agencies from New Jersey to Massachusetts to issue air quality alerts.

“What occurs sometimes with summer time patterns is air that is stagnant,” said Mike Schichtel, a forecaster with the U.S. Weather Prediction Center in College Park, Maryland. “Once you get into a pattern with a little more flow, it gets a lot better.”

Poor air quality is caused by a reaction between oxides of nitrogen from power plants and diesel and volatile compounds from gasoline, paint, varnish and trees. People with respiratory problems or anyone who suffers when air quality falls were urged to take precautions.

“The reaction that happens in the atmosphere depends on sunshine and high temperatures to become efficient,” according to John Kent, an air pollution meteorologist at the New York State Department of Environmental Conservation. “It goes up and down each day and it peaks in the afternoon and early evening.”

The air was so bad on Monday that air quality alerts were posted from Virginia to Maine, as well as parts of Indiana, Michigan and across upstate New York. It will get so hot in New Jersey, Pennsylvania and Delaware on Tuesday that there is a heat advisory in place from noon to 7 p.m., the weather service said.

Pristine locations aren’t immune – the worst place in the country for air quality Monday was Arcadia National Park in Maine, Kent said. A plume of bad air blew north from the rest of New England.

For more on what was forecast to be the most intense heat of the year across the U.S. East, boosting energy demand, read this.

People should limit strenuous outdoor activity and anyone with asthma, heart conditions, as well as the elderly and children, should take care, the New York State Health Department said in a statement posted by the National Weather Service.

“The combination of hot temperatures and higher humidity will combine to create a situation in which heat illnesses are possible,” the weather service said.

Air quality alerts are issued by health agencies in individual states and distributed by the weather service.