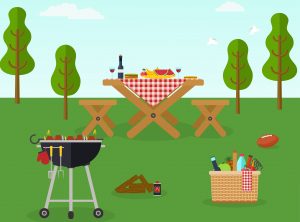 Was it an attempt at a moment’s distraction from the drama unfolding over at the Hart Senate Office Building? Or maybe a sign that the White House just wants to try to get along with that other branch of government down Pennsylvania Avenue?

On Thursday, just about every eyeball on Capitol Hill (and beyond) was trained on the testimony of fired FBI director James Comey, as well as looking out for tweets from President Donald Trump. And just as the blockbuster Senate Intelligence Committee hearing was underway, the White House sent a sweetly colored invitation to each member of Congress requesting their attendance at the annual congressional picnic, a gathering that brings lawmakers to the White House lawn for a rare evening of bipartisan socializing.

“The President and Mrs. Trump invite you …” began the invitation, which featured, strangely, a watercolor painting of a picnic basket perched on a grassy spread in front of a skyline that definitely wasn’t Washington.

The skyscrapers behind the park-like scene brought to mind New York City. Was it Central Park?

No matter. Looks like there will be no shortage of conversation topics at the June 22 picnic, though many of them are guaranteed to be awkward.