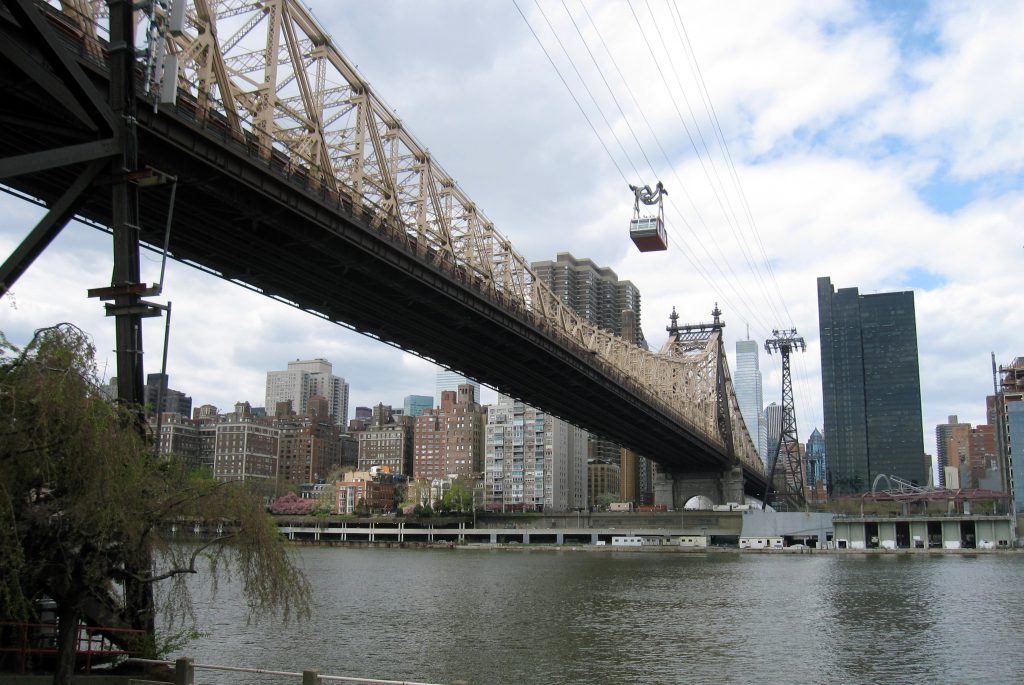 If you’re a rail fan or happen to have one in your family, New York City is a great place to visit. Arguably the most transit-friendly city in America, New York dazzled my 8-year-old son, not only with its ubiquitous subway lines but also with various train-related destinations. During our urban adventure, we visited the best-known train terminal in the nation, crossed the East River on an aerial tram and strolled through vintage passenger cars.

Simply riding the subway, at $2.75 a pop, was a treat for us. On our way to the New York Transit Museum in downtown Brooklyn, we took the Q train, which runs over the Manhattan Bridge. Despite stormy skies, we had a good view of the Brooklyn Bridge across the way, the East River below and lower Manhattan from the last car. We walked several blocks and eventually found the museum in the decommissioned Court Street subway station. The street entrance can be deceiving: It looks and feels like an actual subway station because it once was, although now it’s got museum signs on it. You even have to go down two flights of stairs below street level, just like you would for a real subway station, to enter.

Inside, my son loved the old-fashioned wooden subway turnstiles from the last century. But the old passenger cars on the platform level really got his attention. He pretended that one of the cars, once used in an elevated train in Brooklyn, was rolling down the tracks and he was running after it to get on. The beautiful lightweight wooden body coach was made in Newark, Ohio, in 1907 for the Brooklyn Rapid Transit Company, or BRT. The car was in service in New York between 1908 and 1969 before its restoration in 1979, according to the New York Transit Museum.

I was fascinated by the old advertisements and announcements posted inside the 20 retired passenger cars. There was a World War II-era message telling riders to observe “meatless days” and “wheatless days” to help win the war. Other ads featured Chesterfield cigarettes and Carstairs blended whiskey for $3.61 a bottle. One of my favorite ads, from 1912, addressed onboard heating regulations. It decreed that from Oct. 15 through April 15, passenger cars would be “equipped with suitable heating apparatus” to heat the cars between 40 and 65 degrees F, except when a storm, accident or emergency caused the heating system to fail. Sounds downright chilly, right?

Leaving Brooklyn, our next stop was the iconic Grand Central Terminal, which 82 million passengers flow through each year. The massive station, built 104 years ago, is still captivating. In the main concourse, my son peered up at the green ceiling, famous for a depiction of the zodiac, and his jaw nearly dropped. It features 12 constellations painted in gold leaf and 2,500 stars, 59 of which are illuminated by LEDs. We talked with a friendly, informative attendant at the information booth beneath the station’s famous four-faced clock, who told us where to find the nearby New York Transit Museum Gallery Annex & Store in Grand Central. It’s a good place to buy train-related books, toys and memorabilia. If you don’t feel like trekking to the exhaustive museum in Brooklyn, this smaller space may do the trick.

Our next stop was the Roosevelt Island aerial tramway, which offers stellar views as it rises as high as 230 feet to cross the East River. The nearly three-minute ride between Manhattan and tiny Roosevelt Island is a steal for $2.75. (Just like the subway, it requires the use of a prepaid MetroCard, which riders swipe at the turnstile to enter.) The windowed cabins are suspended on cables and carry up to 109 passengers about three-fifths of a mile (1 kilometer), at up to 17 mph (27 kph). There are cool views of the island, Manhattan and the Ed Koch Queensboro Bridge, but my slight fear of heights prevented me from enjoying it as much as I could have. I was relieved to soon be on firm Roosevelt Island ground. We briefly checked out the 2-mile-long island (3.2-kilometer), named for Franklin Delano Roosevelt, before heading back to Manhattan on the tram — though you can also take a subway back under the river.

But in New York, transportation buffs don’t have to hunt down the tram, Transit Museum or even Grand Central to get their kicks. Just grab a subway map — free from the manned station kiosks — or download one on your phone, and go for a ride. Whether you encounter rush hour commuters, a mariachi band, a preacher or a panhandler, it’s bound to be colorful — but it also happens to be the cheapest and most efficient way to traverse the city.