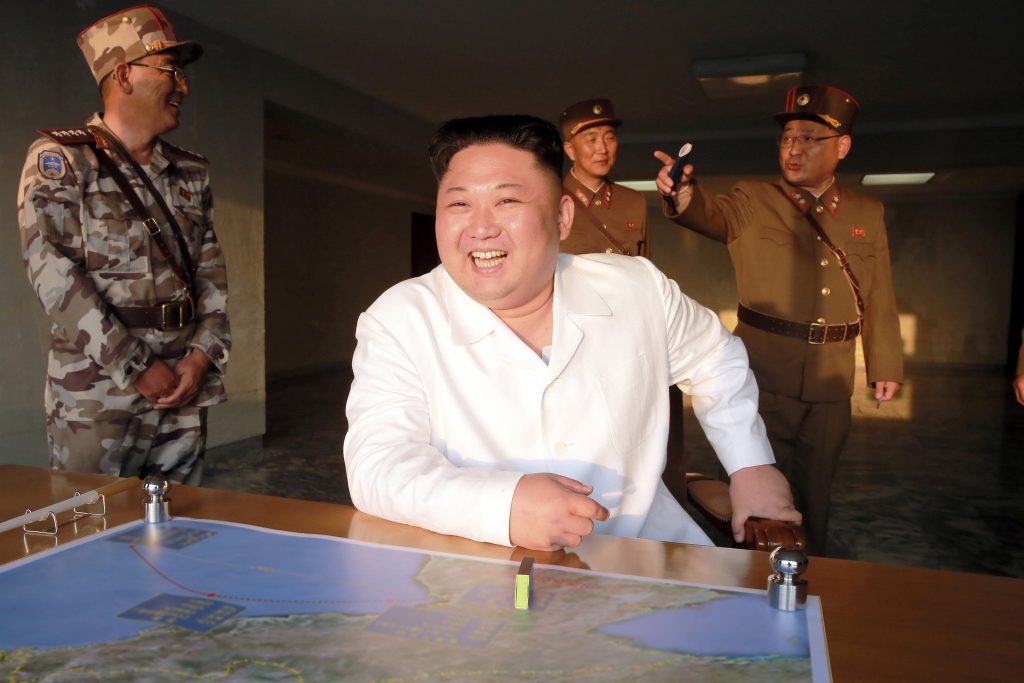 The missile launched on Monday was equipped with an advanced automated pre-launch sequence compared with previous versions of the “Hwasong” rockets, North Korea’s name for its Scud-class missiles, KCNA said. That indicated the North had launched a modified Scud-class missile, as South Korea’s military has said.

The North’s test launch of a short-range ballistic missile landed in the sea off its east coast and was the latest in a fast-paced series of missile tests defying international pressure and threats of more sanctions.

Kim said the reclusive state would develop more powerful weapons in multiple phases in accordance with its timetable to defend North Korea against the United States.

“He expressed the conviction that it would make a greater leap forward in this spirit to send a bigger ‘gift package’ to the Yankees” in retaliation for American military provocation, KCNA quoted Kim as saying.

South Korea said it had conducted a joint drill with a U.S. supersonic B-1B Lancer bomber on Monday. North Korea’s state media earlier accused the United States of staging a drill to practice dropping nuclear bombs on the Korean peninsula.

The U.S. Navy said its aircraft carrier strike group, led by the USS Carl Vinson, also planned a drill with another U.S. nuclear carrier, the USS Ronald Reagan, in waters near the Korean peninsula.

A U.S. Navy spokesman in South Korea did not give specific timing for the strike group’s planned drill.

North Korea calls such drills a preparation for war.

Monday’s launch followed two successful tests of medium- to long-range missiles in as many weeks by the North, which has been conducting such tests at an unprecedented pace in an effort to develop an intercontinental ballistic missile (ICBM) capable of hitting the mainland United States.

Such launches, and two nuclear tests since January 2016, have been conducted in defiance of U.S. pressure, U.N. resolutions and the threat of more sanctions.

They also pose one of the greatest security challenges for President Donald Trump, who portrayed the latest missile test as an affront to China.

“North Korea has shown great disrespect for their neighbor, China, by shooting off yet another ballistic missile … but China is trying hard!” President Trump said on Twitter.

“Japan and China need to work together to strongly urge North Korea to avoid further provocative actions and obey things like United Nations resolutions,” Mr. Yachi was quoted as telling Mr. Yang in a statement by Japan’s foreign ministry.

A statement from China’s foreign ministry after the meeting made no mention of North Korea.

North Korea has claimed major advances with its rapid series of launches, claims that outside experts and officials believe may be at least partially true but are difficult to verify independently.

A South Korean military official said the North fired one missile on Monday, clarifying an earlier assessment that there may have been more than one launch.

The test was aimed at verifying a new type of precision guidance system and the reliability of a new mobile launch vehicle under different operational conditions, KCNA said.

However, South Korea’s military and technical experts questioned the claim because the North had technical constraints, such as a lack of satellites, to operate a terminal-stage missile guidance system properly.

“Whenever news of our valuable victory is broadcast recently, the Yankees would be very much worried about it and the gangsters of the south Korean puppet army would be dispirited more and more,” KCNA cited leader Kim as saying.