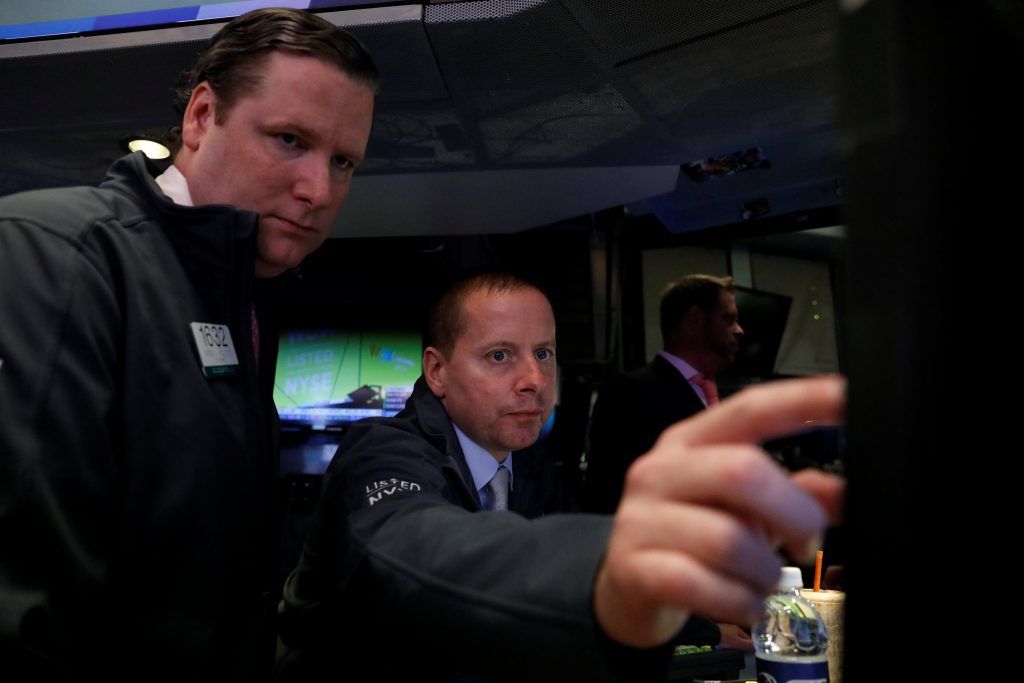 U.S. stock indexes are climbing for the sixth day in a row Thursday following strong quarterly results from retailers including Best Buy and PVH. The Standard & Poor’s 500 index and Nasdaq composite are at all-time highs, but stocks are divided overall, as small companies trade lower and energy companies plunge along with the price of oil.

BUY, BUY, BUY: Electronics retailer Best Buy jumped after it issued a strong first-quarter report, including better sales of mobile devices and gaming products. Its stock gained $11.40, or 22.6 percent, to $61.82. PVH, the owner of brands including Calvin Klein and Tommy Hilfiger, climbed $5.46, or 5.4 percent, to $107.50 after it raised its annual forecasts in the wake of its own strong report. Jeans maker Guess leaped $1.46, or 14.6 percent, to $11.44 after its announcement.

Other retailers including Abercrombie & Fitch and Burlington Stores also made substantial gains, and online retailer Amazon approached $1,000 a share for the first time. Amazon was up $16.44, or 1.7 percent, to $996.79.

OIL: OPEC and a group of other nations said they will extend their production cuts for another nine months in an effort to shore up the price of oil. Investors appeared to have hoped for a longer extension. Oil prices have rallied over the last few weeks as investors hoped for an extension, and experts were skeptical that the deal will do much to boost prices.

THE QUOTE: Kate Warne, an investment strategist for Edward Jones, said she doesn’t think Thursday’s retail earnings are a sign that business for traditional retailers is getting better.

“It’s probably not something investors should take as a sign of improvement in the retail landscape,” she said. “Consumer spending is actually strong, but consumers are spending in places other than traditional retailers.”

DRINKING ALONE: Jack Daniels maker Brown-Forman slumped after it put out a statement saying the company is not for sale and plans to remain a family-controlled company. The stock jumped Monday on reports that Constellation Brands, which makes Corona and Modelo beers, might try to buy Brown-Forman. The stock fell $2.73, or 5 percent, to $51.61. Constellation Brands gained $2, or 1.1 percent, to $180.84.

TALKING TURKEY: Spam maker Hormel Foods sank as the company said its Jennie-O turkey business continued to struggle in the second quarter. The company’s income and sales both fell short of Wall Street projections. Hormel’s stock gave up $2.29, or 6.5 percent, to $33.11.

LAGGING BEHIND: Unlike the other major indexes, the Russell 2000 has not recouped all of its losses from last Wednesday, when the stock market had its worst day of the year. The index is composed of smaller and more domestically-focused companies, and new challenges to President Donald Trump’s proposed agenda of reduced taxes and regulations have hit those companies harder.

Warne, of Edward Jones, added that the performance of the U.S. economy has been mixed lately and international growth is looking better. That helps larger companies that do more business overseas, like large technology firms, but doesn’t help smaller companies as much.

BONDS: Bond prices were little changed. The yield on the 10-year Treasury note remained at 2.25 percent.

OVERSEAS: Germany’s DAX was down 0.2 percent, and the French CAC 40 lost 0.1 percent. The FTSE 100 index in Britain was unchanged. The Nikkei 225 index in Tokyo climbed 0.4 percent, and Hong Kong’s Hang Seng rallied 0.8 percent. The Kospi of South Korea jumped 1 percent.