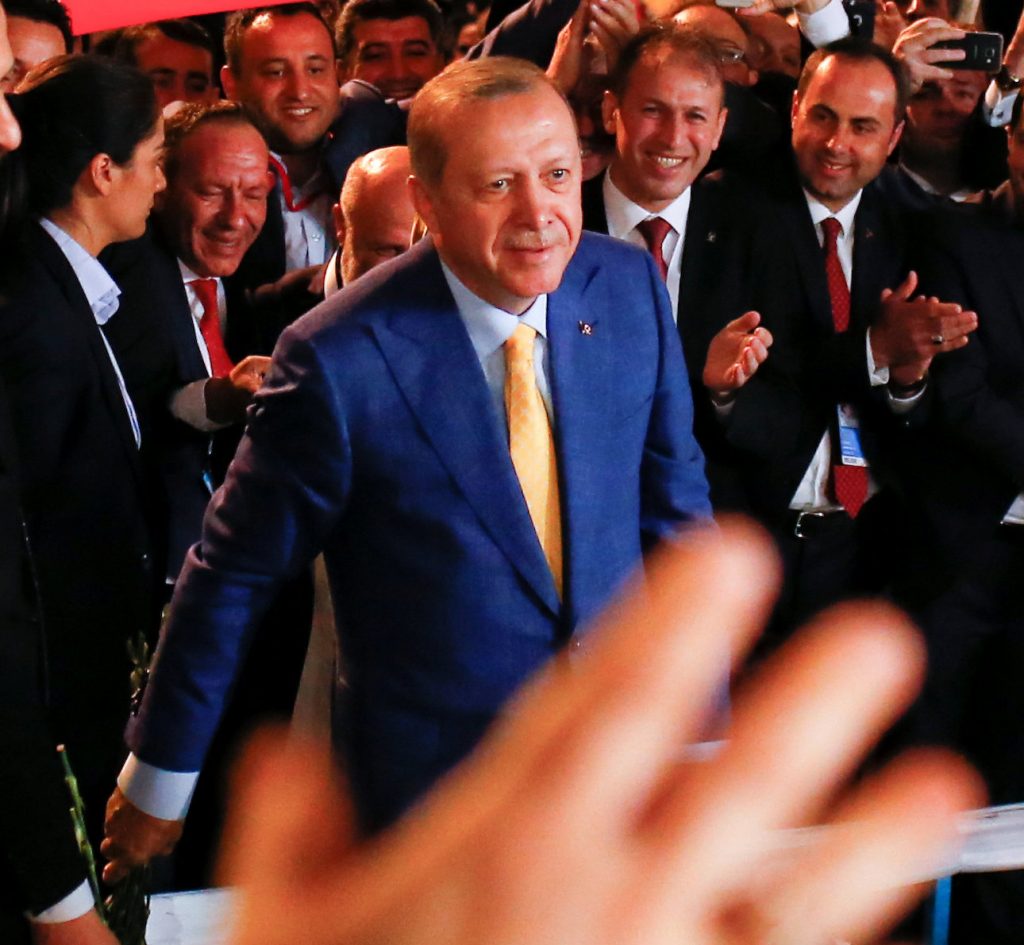 President Tayyip Erdogan pledged his commitment to leading Turkey’s ruling AK Party (AKP) as he prepared to be elected on Sunday as the first Turk in nearly 70 years to serve simultaneously as head of state and of a political party.

“We were separated, but today we are together again,” he told a crowd of applauding supporters outside a hall in the capital Ankara, where the party congress was being held amid tight security.

“We will work hard,” he added before entering the arena, where thousands of party faithful cheered and waved AKP flags.

Erdogan, who founded the Islamist-rooted AKP in 2001 and led it to victory in an election a year later, was forced to surrender leadership nearly three years ago when he was elected president, a position traditionally above party politics.

That changed with last month’s referendum, in which Turks narrowly backed a constitutional change to create an executive presidential system that would give Erdogan sweeping new powers and allow the head of state to be a party member or leader.

He is the first president to lead a party since Ismet Inonu, who succeeded modern Turkey’s founder, Mustafa Kemal Ataturk, and was head of state until 1950. He replaces Binali Yildirim, who is set to remain as prime minister until elections in 2019.

Such sweeping political changes, Erdogan says, are vital to ensure stability in Turkey as it battles Kurdish and Islamist militants and after an attempted coup last year that Ankara attributed to supporters of U.S.-based cleric Fethullah Gulen.

On the eve of Sunday’s AKP congress Turkish police killed two suspected Islamic State terrorists in a clash during a raid on an apartment in Ankara, state-run Anadolu news agency reported. The two men killed were believed to be planning an attack, the agency said.

Opposition parties, which want the referendum annulled because of alleged irregularities, say the reforms push Turkey towards one-man rule. Some of Turkey’s NATO allies and the European Union, which it aspires to join, have also expressed concern.

Erdogan’s return to the party coincides with growing foreign policy challenges and tensions with NATO allies.

Last week he held talks with U.S. President Donald Trump in Washington, where he sought to reconcile deep disagreement over U.S. support for a Syrian Kurdish militia, which Ankara regards as a terrorist group.

There was also a deterioration in ties with European Union countries in the build-up to the referendum. Tensions with Germany have been exacerbated by a dispute over the stationing of German troops at Turkey’s Incirlik air base.