World Pacific Ministers Commit to Move Ahead With Pact Without U.S.
World 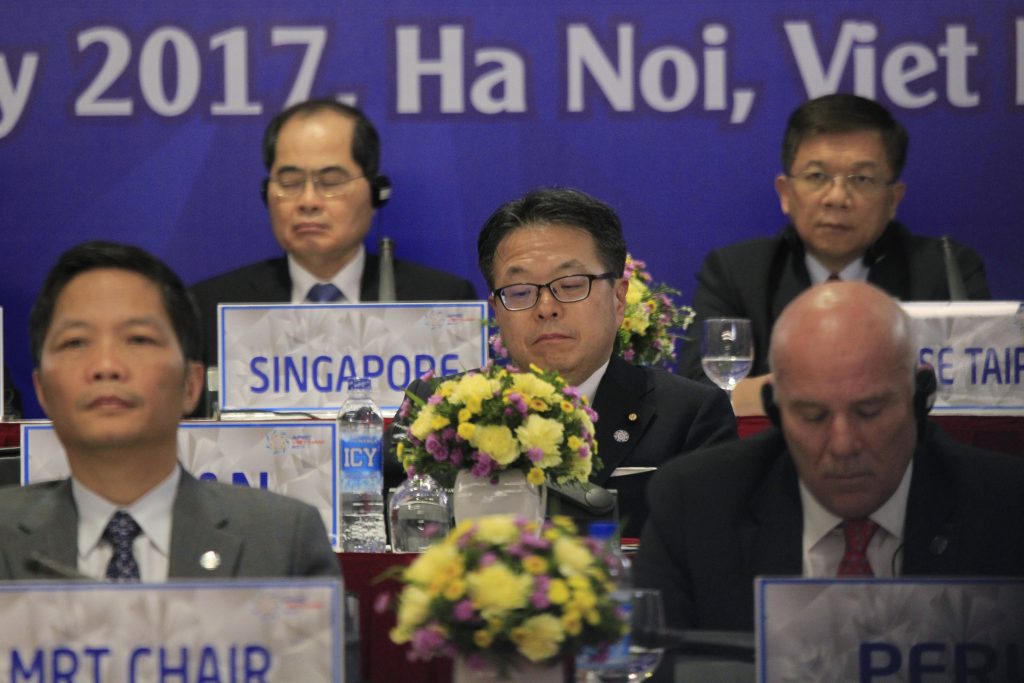 Pacific Rim trade ministers meeting in Vietnam committed Sunday to move ahead with the Trans Pacific Partnership trade pact after the United States pulled out.

New Zealand Trade Minister Todd McClay said the remaining 11 TPP countries are open to others joining provided they accept the trade agreement’s high standards on labor and environmental protection. He said the door remains open to the U.S., even after President Donald Trump withdrew from the pact in January, saying he prefers bilateral free trade deals.

“It’s clear that each country is having to consider both economic values and strategic importance of this agreement, but in the end there is a lot of unity among all of the countries and a great desire to work together to come up with an agreement among 11 that not only delivers for all of our economies and the people of our countries, it’s also open to others countries in the world to join if they can meet the high standards in the TPP agreement,” McClay told reporters.

Since the U.S withdrawal, Japan and New Zealand have been spearheading efforts to revive the deal. In its current form, the TPP requires U.S. participation before it can go into effect. That means the remaining countries would need to change the rules for any deal to go ahead, and it would be significantly smaller without the involvement of the world’s largest economy.

The 11 countries represent roughly 13.5 percent of the global economy, according to the World Bank.

The trade ministers said in a statement that they agreed to launch a process to assess options to bring the agreement into force “expeditiously, including how to facilitate membership for the original signatories.”

The ministers have tasked their trade officials to present the assessment to their leaders when they meet for the annual Asia Pacific Economic Cooperation summit in Vietnam in November, which will also include President Trump, Russian President Vladimir Putin and Chinese President Xi Jinping.

They also underlined their vision for the TPP to expand to include other economies, saying such efforts would address concerns about protectionism, contribute to maintaining open markets, strengthening the rules-based international trading system, increasing world trade and raising living standards.

Vietnam and Malaysia had been expected to be beneficiaries from the original TPP with greater access to U.S. markets and investments. The TPP was championed by former President Barack Obama and was seen as a counterbalance to China’s growing influence in the region.

U.S. Trade Representative Robert Lighthizer, making his international debut since taking office a week ago, defended Trump’s decision to pull out of the TPP.

“But we certainly expect to stay engaged and I believe that at some point that there’ll be series of bilateral agreements with willing partners in this part of the world,” Lighthizer added.

He rejected criticism that the Trump administration was embracing trade protectionism. “Our view is that we want free trade, we want fair trade, we want a system that leads to greater market efficiencies in the world,” Lighthizer said.

The China-led 16-member Regional Comprehensive Economic Partnership will meet Monday in Hanoi to further their discussions on a separate deal seen as an alternative to the TPP. It is expected to be finalized by the end of this year.

“I think confidence we have shown in this meeting for the multilateral trading system for regional economic cooperation within APEC can be a very good and strong signal that we are united and we are steadfast in fighting trade protectionism and reducing trade risks,” said Chinese Deputy Trade Minister Wang Shouwen.