Poor Posture at Work? It’s Time to Straighten Up 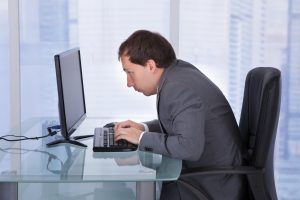 Maybe, or just your average Joe and Jane glued to their cellphones and computer monitors in 21st-century Washington or just about anywhere in the world.

We’re talking about modern-day posture — or lack thereof — and what it means not so much aesthetically (though Quasimodo is hardly a beauty ideal) but functionally for the body.

“Bad posture can contribute to things like disk herniation, pinched nerves, tingling, arthritic changes in the joints, and tissue getting shorter and tighter,” says Haim Hechtman, a doctor of physical therapy and the co-founder of Point Performance, a physical therapy practice in Bethesda, Md.

Which is what a lot of people feel — pain — before realizing and addressing the underlying issues of what it means and feels like to stand upright.

“Bad posture wears down the body faster than it should,” says Ben Fidler, a D.C. personal trainer.

The wearing-down can lead to pain as the body fights to compensate for imbalances while remaining as upright as possible.

For example, Fidler says, if the head is forward, the muscles in the back of the neck are lengthened while the muscles in the front are shortened. This means that none of the muscles and other tissues (such as tendons) are working at their optimal and most efficient level.

One of the things that separates elite athletes from the rest of us is that they move efficiently, Fidler says.

“Top athletes can generate twice the force with the same body.” Or “they might use half the energy to stand up straight.”

In other words, they can use the remaining energy for the task at hand.

But enough about them. How about the rest of us?

Fidler does a posture assessment with new clients and then combines the posture needs with whatever other goals clients might have, such as bigger biceps.

But to boil it down, this is what Fidler suggests for improving general posture:

– Roll the shoulders back and bring the head back to align with the spine.

– Brace through the core (engaging your transverse abdominals and obliques by pulling air in toward the trunk).

– Squeeze the gluteus to create pelvic stability while keeping a neutral lower spine (staying within the natural curvature).

To support these posture improvements, Fidler suggests mixing plank and bridge poses into your exercise routine, as well as two-arm rows using a TRX strap. But even with such exercises, if your poor habits are so ingrained that you no longer know what it feels like to stand up straight, improvement is easier said than done.

“Our perception of what neutral or good posture is differs from reality,” Hechtman says, adding that the longer we have poor posture (years, decades), the harder it is to correct. “The brain gets used to a certain position and perceives that as what ‘upright’ is.”

“The ultrasound allows you to see what the muscles are doing in real time,” he says, adding that this helps patients connect with their muscles and consequently learn how to better engage them.

But let’s face it: Most people probably won’t seek a physical therapist or a trainer to improve their posture.

Occupational therapist and ergonomics expert Naomi Abrams, says that most people have a poor perception of their own posture and could use some expert help. But if it’s not available, she recommends having a friend take a picture of you at your sitting or standing desk to see how your shoulders align (or not) over your hips and where your head is compared with the rest of your spine.

“When you’re doing yoga, you are thinking about posture and yoga, but it’s not realistic to think that you can focus on posture while you’re working,” Abrams says. “We don’t multitask. We serial-task.”

As for the workspace, she recommends bringing work tools closer to your body. (We apparently tend to reach for things such as keyboards, which encourages the forward rolling of the shoulders.) Her company, Worksite Health & Safety Consultants, looks at how the work environment can support workers.

Among her other recommendations:

— Sit farther back into the chair. (Use a footrest if legs are dangling.)

— Keep your wrists straight and fingers floating over the keyboard (like a piano player).

— Place the keyboard so that your elbows can draw back toward the side of your ribs.

— Place the monitor at a height that allows your neck and gaze to stay straight.

“Use the things — don’t let them use you,” Abrams says.

How about standing desks?

Abrams says that standing desks pose many of the same issues as sitting desks and that they were never intended to be the ultimate posture solution. “We stood people up because we wanted them to move,” she says.

She, Fidler and Hechtman agree that getting up and moving every so often is key to good posture at work.

Abrams takes it a step further: “……. Dance and wiggle at your desk?”

– Boston is a fitness trainer and freelance writer