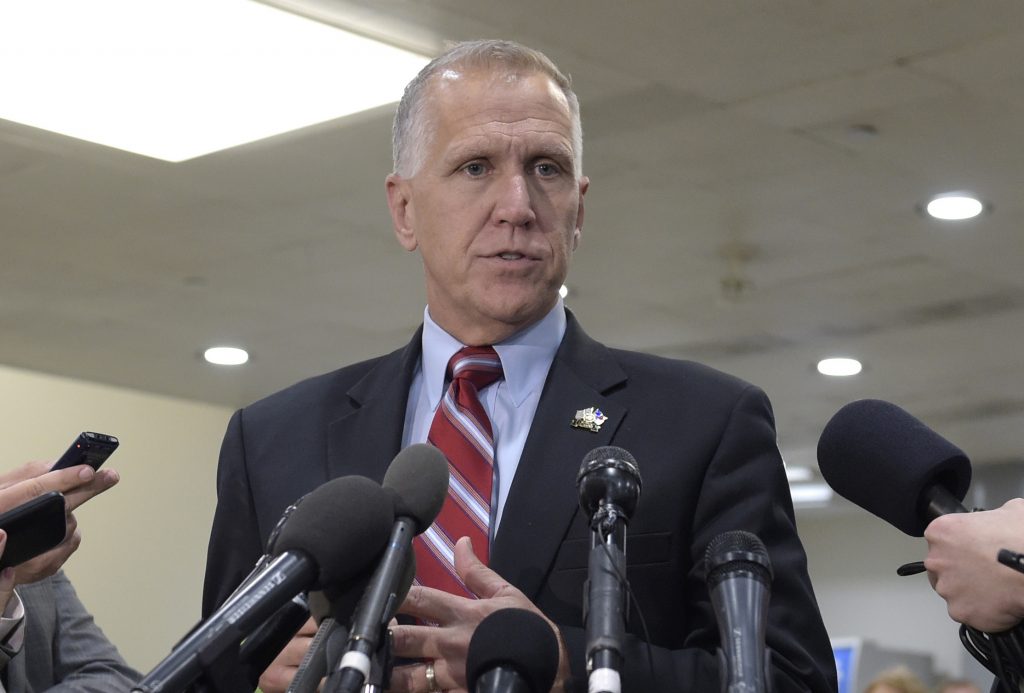 Republican Sen. Thom Tillis of North Carolina said he’s “fine” Wednesday after collapsing during a Washington, D.C., race and being taken away by ambulance.

Tillis, 56, was seen on the ground being treated by bystanders at about 15-20 minutes into the three-mile race in Anacostia Park in the southeast part of the city. Tillis at first appeared unconscious but was revived and breathing when taken away by ambulance.

Tillis later posted a video on Twitter from his hospital bed Wednesday morning saying he was OK and thanking people for “all of your prayers and well wishes.”

“Hey everybody, I’m fine. Just running about 2 and a half miles in and got overheated, no CPR, no special measures, just checking me out,” Tillis said in the video. “See you back on the Hill.”

Tillis was participating in the ACLI Capital Challenge race, an annual event in Anacostia Park in the district. He was leading his own team, “Team Tillis.”

Many politicians and other prominent Washington, D.C., figures run the annual race. Proceeds go to charity.

When not in Washington, Tillis lives north of Charlotte. He was a consultant for Pricewaterhouse and later IBM.

Tillis served on his town council for two years, followed by one year as PTA president of his children’s high school before defeating an incumbent Republican in the 2006 primary for a state House seat. He vaulted up the ranks at the General Assembly, becoming minority whip in his second term.

He quit his IBM job to find legislative candidates and money for the 2010 elections, when Republicans won majorities in the House and Senate for the first time in 140 years. He was rewarded by being elected speaker. During his four years at the chamber’s top job he helped push through a series of conservative policies on taxes, regulations and abortion.

Tillis ran for the U.S. Senate in 2014, where he defeated incumbent Democrat Kay Hagan.

Tillis is known for his athleticism as an avid mountain biker and participant in obstacle endurance races.

He is married to Susan Tillis and has two children.

It was not immediately known what hospital Tillis was taken to.